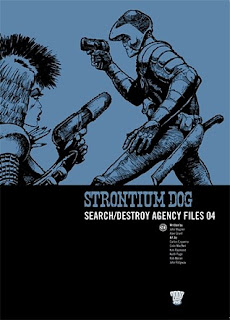 It's the final week of February already! I've just finished Strontium Dog: Search/Destroy Agency Files 04, meaning I only have 05 left to go. After that omnibus, I may do a few Marneus reviews and then a couple of Dredds before heading back to SD for the non-omnibus tales.

But back to Strontium 04. You know the deal by now, adventures in a far-flung future, where Britain has been nuked and a downtrodden mutant faction now attempts to survive. In this setting, we have Johnny Alpha, the son of an infamous Mutant hater (Keeler) and now himself a galaxy renowned Bounty Hunter. Working out of the Dog House Alpha and other mutants like him, now hunt down the criminals of the Galaxy. No job too big, if you have the money to pay. Welcome to Search/Destroy agency aka Strontium Dogs.

I'm excited about this issue and the reason for the excitement is on the cover. Durham Red, when I first was reading 2000 AD my real introduction to the S/D series was actually through Durham Red. I hope to visit her tales soon, but to actually read her introduction will be a great experience. Also from my understanding a large amount of the 352-page omnibus has her staring in it. 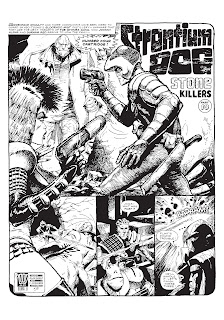 I wanted Durham Red and it turns out she is in the first story, which also turns out to be the longest one as well. Titled, Bitch. The tale introduces Durham Red to the S/D stories. Durham is a vampire-themed female mutant and a rare female character in the S/D series. She thirsts for blood but does not suffer from a classic vampire weaknesses. The story itself is pretty fun; involving an alien race who is suffering from the colonisation of their world by humans. A rebel factor fighting for freedom, travels back in time to kidnap Ronald Reagan from Earth and then attempt to use him as a bargaining chip to force the human populace to leave their planet. Into this mix, the Search/Destroy Agency has been hired to find the kidnapped leader of the free world, meaning loads of mutants are now heading to this world. Into this mix comes Alpha and Red, soon they have tracked down the kidnappers, but here the plot takes a twist as Johnny sides with the aliens. His reasoning is the aliens cause mirroring the mutant freedom movement of his past. Overall a great story, that made Durham interesting and not just comic relief like McNulty.

Following this first story up, we have a politically themed story called 'The Royal Affair'. In this story, the King of England, hires Johnny Alpha to protect him whilst he chases his true love. The only problem is  who that happens to be, a mutant. Ultimately this is a story of hope, the hope that things might change. Unfortunately, it doesn't happen and the King is ultimately overthrown and forced into exile, but love did win out.

Then we get a comedy story in 'A Sorry Case', followed up with 'The Rammy" which is pure action. Though nothing is really added by these stories, they do offer a break and reset for the reader. It helps to remind us of what S/D should be about. Then we hit 'The Stone Killers", which brings back Durham Red and introduces an alien world of Stone based lifeforms. An exciting and fun story that also reintroduced the Stix Family - how many members of the family are there? It also seems like the creative writers are struggling on plots, as they continue to rehash already used themes as showcased with 'Incident On Zeta'. Once again Johnny Alpha is on a Spaceship, which is captured by pirates and because once again he is a mutant, he is staying in the storage area when it happens. Giving Alpha the chance to save the day once more. Now, before you complain, I understand that there were most likely years between the actual stories if you were to read them in the comics. Sadly when reading these Omnibus' it seems we have to have one version of the spaceship heist per omnibus.

Then like that, we are at the last tale of the book. 'The No-Go Job" - Now let's be clear from what I have read people either love this one or hate it. I personally loved it. Simon Harrison's artwork is strange when compared to Ezquerra's. But it works and I enjoyed the change of style. Now if it was a permanent change, I am sure I would have an issue. 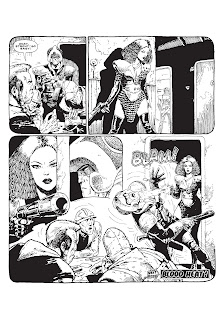 With that I am technically finished. But wait! There is more. We get a couple of one-off stories from the specials and the annuals. We even see the return of the beloved Wulf. I am going to be brutally honest and state that the artwork sucked on these. I found myself skipping through them, lacking interest which is a real shame. Overall this collection is a lot more light and comical, lacking any real depth at times. Though enjoyable mostly, it did feel like I was reading filler pieces, something to remind people what the S/D series is. It's a solid four out of five, though after the last omnibus it felt lacking.

Come back next week for Omnibus and the final book in the series.

The Game: The Good, The Bad, The Mutie by Warlord Games
Posted by Adventures with Peps at February 23, 2021