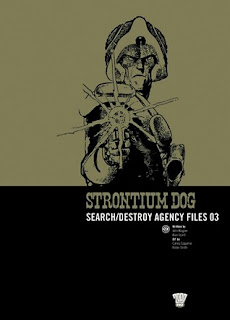 Another gigantic omnibus for Strontium Dog: Search/Destroy Agency Files 04. Compiling 10 stories over 384 pages. The big tale in this the Max Bubba story which leads perfectly into the starter box set, I can't wait to read that one.

Here is the official write up:

Following the Atom Wars in the 22nd century, many of the survivors were mutated by the Strontium 90 fallout. Unable to get regular jobs, forced into ghettoes and considered an underclass by the 'norms', the only work open to them was bounty hunting. These Search/Destroy Agents hunt the criminals too dangerous for the Galactic Crime Commission.

No clues there about the stories ha. Let us dive in. By now we know the score, Johnny Alpha is a powerful and violent man but has a heart of gold and is a sucker for a sob story. Most of the book has very solid classic storylines, with Johnny Hunting down his man. But there are two standout tales that combine together to produce a heartbreaking tale. 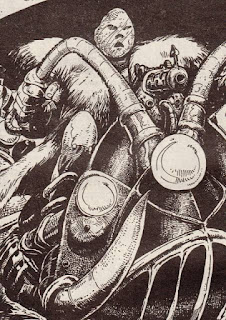 The first is Max Bubba. Bubba and his gang members have once again escaped prison and are seeking revenge on Alpha and Wulf. Ambushing the pair they torture Alpha and Wulf staking them out in the burning sun. Johnny starts having flashbacks and we meet our main villain alongside his gang as they break out of prison the first time. Knowing they would be easily caught Bubba transports his gang through time to the era of the Vikings. Here Bubba plans to destroy the future by killing the past. As the future timeline starts to unravel Johnny Alpha is chosen to travel back in time to arrest/kill Bubba and his gang. During this adventure Alpha teams with the Viking warrior Wulf Sternhammer and with a crew of Vikings, they attempt to hunt down the Bubba gang.

A seriously epic tale of adventure, we have multiple timeline themes merging as the damage to the future continues. In the showdown between Bubba and Alpha the body count rises, and but Johnny manages to capture 3 of the criminals (Bubba, Mosley and Jones) and kills the rest. During the fighting Wulf is transported to the future and after reuniting with Alpha, chooses to stay forming the duo we know and love. This story ends tragically as Wulf Sternhammer attempts to escape and is gunned down and dies in the baking sun. 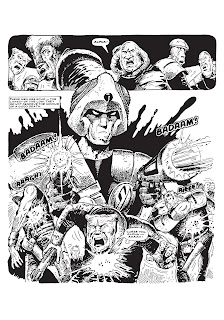 After this heartbreaking story, we join Johnny as he nursed back to health, basically a couple standard filler stories before Rage; the follow-up tale to Max Bubba. This is a dark tale, Johnny is a broken man on a dark path of revenge and we watch as he travels the galaxy to hunt down the Bubba gang. Through his chasing of the gang Johnny manages to kill off Brute Mosley in an avalanche, then after seriously wounding Impetigo Jones we see him get eaten alive by alien crabs on a beach. Then the final showdown happens, one on one Alpha grievously wounds Bubba and seemingly leaves him for dead. In the next scene, Bubba is in hospital and believes Alpha wrongly left him for dead. Filled with hope and the belief he can escape Bubba leaves the hospital to discover it was all a vile trick by Alpha to give Bubba false hope. As Bubba pleads for his life all Alpha can say is "I hate you!" and guns Bubba down in the street finally ending this saga.

The rest of the book starts to show the return of the Johnny Alpha we know and love as he helps Mutant Farmers hold of some norms and then we get some bonus stories, with a returned Wulf, I believe showing a job set before the Bubba story. The main issue I have is: Where has the Gronk gone?

Overall an above average read. Made epic and heartbreaking by the Bubba/Rage story. I'm intrigued about what will happen in 04, I am hoping we will finally get more McNulty and Durham Red. Come back next week for that issue.

Posted by Adventures with Peps at February 16, 2021