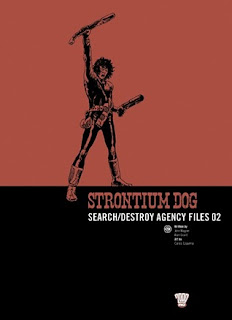 Wow, this is one big omnibus. I finished reading this one with a day to spare. Meaning I am writing this with barely 24 hours to go before it goes live. I have to say, I am really enjoying the Strontium Dog series so far, it definitely isn't knocking Dredd off the top spot but is definitely up there in my enjoyment lists. As I stated earlier this year, I am really getting into the Warlord Games: The Good, The Bad and The mutie; a Strontium game. To ensure I am getting the most out of the game, I am attempting to read a large chunk of the series as well as painting up figures.

Last week I unsurprisingly started with omnibus one. Once you have had a read that, you can head back here. The original book was a great intro to the main trio and did a solid job of introducing us to the series.

I entered this book looking for the lore to be expanded and I was not disappointed. 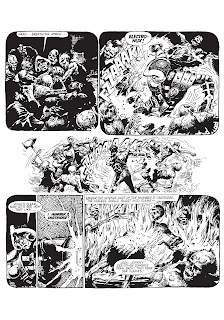 This omnibus opened with Portrait of a Mutant - a deep dive into Johnny Alpha's past, how he was affected by the Strontium 90 and also how his father Nelson Kreelman was in fact the leader of an anti-mutant group. Through this series, we meet the leaders of the mutant rebellion (who later become Strontium Dogs), we discover how and why T-Weapons were created and finally how Kreelman was overthrown. Great intro to this book, which left me more engaged with the Strontium series than I could have imagined. This was then followed by the emotional - The Gronk Affair. This tale reintroduces the Weerds Brothers (first seen in the Hell series), these low life Strontium Dogs are looking for revenge on Johnny and Wulf and in an attempt to lure them into a trap, they aid poachers in an attack on the Gronk's homeworld. Quite a sad tale, showing how dark this series can be, the sight of all the Gronk pelts is rather horrific.

We then get what I would call more traditional style stories for Strontium Dogs, the first involves Kid Knee, a down and out SD agent, looking for one final score against the criminal known as the Mutator. A good, solid outing. Kid Knee was a fun character and his ending is more of a warning to the main characters about knowing when to quit. This is then followed by the Moses Incident and shows the effect the job can take on Alpha and the lengths he will go to, to right a wrong. A rather dark and emotion-filled story. Then the third story in this trio - The Killing, has Alpha and Sternhammer entering a deadly competition where to win you have to kill everyone else! Alpha and Sternhammer take on this challenge as nearly all the competition have bounties on their heads. This ended up being a classic gunfight story and I loved it. 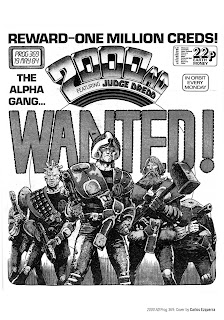 Then to finish up we had a 23 parter (basically an Epic) called Outlaw. This actually continues the Nelson Kreelman story. With Johnny Alpha's Dad reappearing in disguise to take over the Strontium Dog program. With the aid of the Stix Brother's, Kreelman is able to turn S/D agent against S/D agent. Within this chaos, he also manages to get Alpha, Sternhammer and the old leaders of the Mutant Rebellion outlawed. With a sizable reward on their heads, the team flee the Doghouse and attempt to reclaim their freedoms. This was an amazing story and hit hard on several panels as some of my favourite characters came to an end.

Here is where the omnibus should finish, but there is actually a throwaway bonus tale at the end, that is just pure filler and not very good, to be honest. Overall a great, fun read. Stronger in the story than the first omnibus and is really setting up some exciting story arcs. I just hope omnibus volume 3 can continue the upward trend.

If you have the chance give me a follow. Thank you for stopping by and showing support and feel free to use these links to start your own adventures. I get a kickback if you use the Amazon link, so thank you in advance.

Posted by Adventures with Peps at February 09, 2021