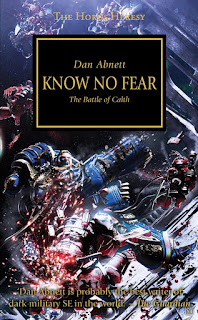 Told you I was back on the Horus Heresy train. Hot on the tail of last week's Deliverance Lost, we come to Know No Fear by Dan Abnett. Let's be honest, it is written by Dan Abnett, so we know it will be fun. It also has the Ultramarines taking a hiding from the Word Bearers so let us dive in and review the novel.

Here is the basic info. Book 19 in the Horus Heresy Series, which clocks in at 412 pages long, features the Ultramarines fighting the Word Bearers and is the infamous Battle of Calth. Here is the official write up:

Unaware of the wider Heresy and following the Warmaster’s increasingly cryptic orders, Roboute Guilliman returns to Ultramar to muster his Legion for war against the orks massing in the Veridian system. Without warning, their supposed allies in the Word Bearers Legion launch a devastating invasion of Calth, scattering the Ultramarines fleet and slaughtering all who stand in their way. This confirms the worst scenario Guilliman can imagine – Lorgar means to settle their bitter rivalry once and for all. As the traitors summon foul daemonic hosts and all the forces of Chaos, the Ultramarines are drawn into a grim and deadly struggle in which neither side can prevail.

When war comes to Calth and set the planet aflame, the Ultramarines face annihilation against a foe who will use any means to settle their bitter grudge.

Wow, great book. I feel like the last two books were rather low key affairs, with lots of stealth and small casts of characters. Well, Dan Abnett kicked down the doors of my sanity and gave me planet destructive warfare!

As a long-time 40k hobbyist I already knew the outcome of the battle and what happens to Calth, but my gosh was it great to finally be able to read how it all went down. A solid portion of the book is used to set the scene, which is very much needed. It is during this stage that we meet the main characters, work out who is where and why. This helps build up the tension of the story as we know the Word Bearers are ultimate villains and are planning to cheap shot the Ultras, and it is this slow build-up that makes it more epic when it finally comes.

When the fighting begins it is classic Marine on Marine action. Backstabbing, treachery, followed with plenty of heroics and heart wrenching agony. One of my favourite scenes was when the damaged spacecraft plunges through the atmosphere and is described beautifully by Abnett's writing. This is making me want to grab the Gaunt Ghost series (but I must finish HH first).

Overall a great story that was written by the right author. Easily in my top 5 so far of the series. 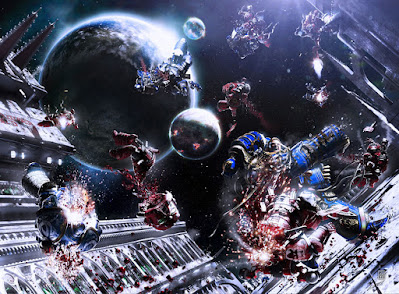 Posted by Adventures with Peps at February 19, 2021