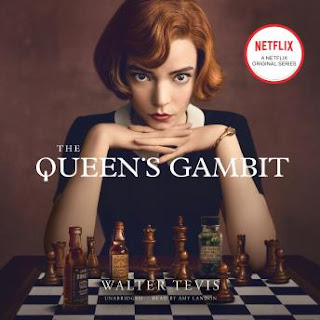 Like many, I was captivated by the TV show and knew I had to try the book. But as I looked upon my to be read pile of shame. I knew I couldn't add this title to it. So I turned to Audible to assist me, listen to this too and from work and during lunch, I soon finished the book.

Here is the official write up:

Eight-year-old orphan Beth Harmon is quiet, sullen, and by all appearances unremarkable. That is until she plays her first game of chess. Her senses grow sharper, her thinking clearer, and for the first time in her life, she feels herself fully in control. By the age of sixteen, she's competing for the U.S. Open championship. But as she hones her skills on the professional circuit, the stakes get higher, her isolation grows more frightening, and the thought of escape becomes all the more tempting. Engaging and fast-paced, The Queen's Gambit speeds to a conclusion as elegant and satisfying as a mate in four.

As stated earlier I would never have known or listen to this title without watching the show first. But straight up this audiobook is so much better than the tv show. I need to definitely start looking into more titles by Walter Tevis.

The title for those who have not seen or heard of this is set in the 1950s and moves into the 60s. Our lead Beth Harmon is orphaned after a horrific road accident. Following a chance encounter with a chess-playing janitor, it is discovered that Harmon is a chess prodigy, and the story goes on to follow her success in a male dominated world.

The main character Harmon is a flawed individual, bright, intelligent, but with an addictive personality. During her time at the home, she becomes addicted to tranquillizers, which almost cost her life and then later as an adult she struggles with alcohol. This two side persona is so well portrayed and makes for a compelling character. Throughout the story, we see Harmon, awkwardly befriend many characters. It is through these awkward interactions that we see Harmon grow, every person Harmon meets seems to aid Harmon to unlock a new trait and grow, though touching it also helps to highlight her faults and how see seems like an outcast and alone.

The story is very compelling and the book finishes before I want it to. I am left wanting more but realistically there is no more, but I do wish we found out what became of Harmon. What does a World Chess player do after winning the big prize? As far as this title goes I can safely say I really enjoyed it, a title that can make me interested in chess is always going to be a winner.

Cheers for checking and feel free to sign up to get notifications and use any of these links to support me.

Get the Book: Amazon Link