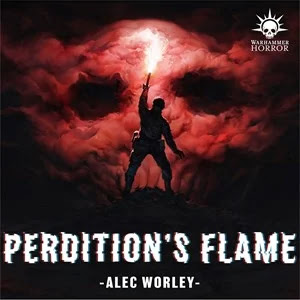 These Saturdays are coming thick and fast, it is almost like there is one a week! For this week's audiobook, we are delving into the Black Library Horror series with Perdition's Flame by Alec Worley. Running at 79 minutes it was perfect for a walk to and from work. Here is the official write up:
The wind screams. The dark night is freezing. Vossk, a Vostroyan Firstborn, shrinks into a rock against a howl of memories. Having disgraced himself by deserting his post during a terrifying encounter, Vossk had resigned himself to penal servitude, though yearned for the chance to redeem himself. But in the 41st Millennium, such dreams are hollow when a man’s reality has been shaken to his core. Found in the shadows of a pitiless cave, Vossk relives his tale to his rescuer. But trauma stalks the weary, and in the face of an even greater horror, it grins at those whose courage has failed them once before…
Written by Alec Worley. Running time 79 minutes. Performed by Grace Andrew, John Cameron Stewart, Andrew Wincott & Jo Woodcock
Not my first adventure into the horror side of Black Library, so I had high hopes (see: The house of Night and Chain along with Watcher in the Rain). The story circles an 86th Vostroyan Firstborn by the name of Vossk. Viewed as a deserter and now imprisoned on a ship en route to a panel legion, Vossk finds himself surrounded by murders and cold-hearted killers. To make matters worst the ship's systems seem to be failing and the horrors that lead to Vossk's desertion have seemingly followed him onto the ship. Now left with no choice Vossk has to team up with his prison wardens and discover the truth of this attack.
To be honest, it is no scarier than any other Black Library titles, but what it does excel at is the production values. A lot of excellent voice acting went into this, and I genuinely appreciate the hard work completed by the actors. A great story of faith and valour whilst still being action-packed and very 40k. Worth a listen to!

Have you listen to or read this story? Let me know your thoughts below in the comments or if you have the chance give me a follow. Thank you for stopping by, show support and feel free to use these links to start your own adventures. I get a kickback if you use the Amazon link, so thank you in advance.

Posted by Adventures with Peps at February 13, 2021