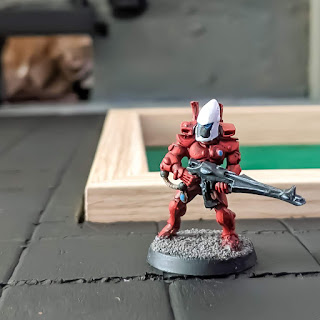 Hoping you are enjoying this Aeldari Craftworld Project series as much as I am? So far I have completed Alaitoc, Biel-Tann and Iyanden. Alongside these posts, I am painting a figure to go along with each one and this has lead to 3 new minis already painted in 2021. Combined with my Strontium project I have already passed last year's painting total! But enough about this, back to the project.

Saim-Hann is one of the larger Aeldari Craftworlds whose Jetbike-riding warriors, the clans of the Wild Riders, are renowned for their savagery and their preference for fast, mobile warfare, striking as a serpent before falling back beyond the reach of retaliation. Theirs is a craftworld of ancient tradition and a proud warrior culture.

In Aeldari myth, the Serpent is the only creature believed to exist in both the material and the psychic universes at the same time. Hence, the Serpent is said to know all secrets past and present. Saim-Hann means "Quest for Enlightenment," for the Aeldari Lexicon word for snake and secret knowledge is identical: "Saim."

The Aeldari of Saim-Hann bears the world-rune that represents the Serpent as their heraldry, sporting it on the cowlings of their jetbikes, grav-tanks and aircraft.

The Aeldari craftworld of Saim-Hann was reputedly one of the first craftworlds to abandon the Crone Worlds as the Fall of the Aeldari approached, heeding their Farseers' warnings. As such they have spent far more time isolated from the rest of the Aeldari than the other major craftworlds, although the Saim-Hann does maintain contact with and have cultural ties to the Exodite worlds. 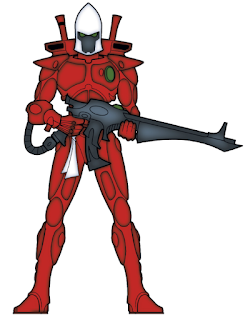 They are fierce warriors, who place honour at a higher value than their more culturally sophisticated kin. This, coupled with their pride, has led them into conflict with each other and different craftworlds. While this generally takes the form of a highly ritualized duel in which first blood is usually sufficient to end the matter, the occasional deaths from these conflicts have lent to the barbaric reputation of the craftworld among other Aeldari.

The Wild Host of Saim-Hann is comprised almost entirely of Windrider bands mounted on Jetbikes. Windrider hosts in battle are spectacularly adorned, especially upon Craftworld Saim-Hann, where the kinbands ride to war in their thousands, sun glinting from their cowlings and pennants snapping like gunfire in the breeze.

Almost every member of Saim-Hann is part of a Wild Rider family, including its Seers, and this allows them to field many specialists who ride Jetbikes and Vypers.

The chieftain's closest family form the kinsmen, who paint their faces with hot blood on the eve of conflict, drink from each other's wrists and ride to war together as brothers. In much the same way, each unit of Jetbikes or Vyper pilots is comprised of blood relatives and tends to sport a vivid banner showing their clan's rune.

It is only during a Wild Rider's time as an Aspect Warrior that his familial ties are put aside, as devotion to the Aspect Shrine overrules all other considerations. The families are maintained in a feudal hierarchy ruled by an Aeldari chieftain and his rule is passed down through hereditary tradition.

Unlike other craftworlds who unite in mass mobilizations, the Saim-Hann kindreds are each free to choose whether or not to fight in defence of a particular cause. Disagreements on military matters are usually resolved with ritual combat between champions chosen from within the kindreds -- however, it is not unknown for a kindred to go to war without the assistance, let alone the approval, of the rest of the craftworld.

Some families also fight with each other, although this conflict usually takes the form of ritual single combat between champions. They are not uncommon, but fights to the death are very rare as first blood is usually sufficient to determine a winner.

The craftworld's rune is a stylized serpent, which is the Cosmic Serpent of Aeldari myth. Indeed, it is revered so much by the Saim-Hann Aeldari that one of their coming-of-age rites is to catch a dagger snake (found on many of the worlds of the Exodites) in mid-strike. The serpent also epitomizes the attack style of Saim-Hann -- a fast, deadly strike before withdrawing, leaving the enemy panicked and confused.

The warriors of Saim-Hann are proud, boisterous and aggressive, and use fast, mobile troops with a high quantity of Jetbikes. Young Guardians are always trying to outdo each other in contests of speed, particularly in battle.

Coming of the Ynnari

After the Ynnari's desperate resurrection of Prince Yriel turned defeat into victory during the Battle of Iyanden, they made haste to Macragge, there to bolster Humanity's shield against the scourge of Chaos by bringing the Primarch Roboute Guilliman back from the brink of death. From there they defended a clutch of worlds from the scourge of Chaos, but always they were on the lookout for more Aeldari sympathetic to their cause.

On Saim- Hann, the Ynnari's high priestess Yvraine found no small number of converts. The Saim-Hann world-ship had been sorely pressed since the opening of the Great Rift. At the height of the Khornate Blood Crusade, it had sent five entire clans to hold back the gore-maddened Red Tide on Upsilon, securing a fraught victory before disappearing to leave the planet's Human survivors shaken and confused behind them.

At the same time, the craftworld's fleet had fought void battles against Imperial Navy warships and elements of Abaddon the Despoiler's vast armada of the 13th Black Crusade.

At first, Yvraine's call to arms on behalf of the god of the dead Ynnead was seen as the last thing the seers and chieftain of the craftworld needed. It risked a schism dividing their clans, for tempers on Saim-Hann had always run hot.

A council was convened at the Speaking Place, a tribal hub in the midst of one of the craftworld's wilderness zones. Beneath the shimmering vault of a colossal bio-dome, they talked of ancestors, spirits, and futures yet to be. For a while, they found accord around the ever-burning fires of that place.

Then the skies shimmered above the conflagration, and a Drukhari strike force burst from a Webway gate long forgotten. Their intent was to slay Yvraine with a swift decapitating strike, ending her threat to Supreme Overlord Asdrubael Vect's power over the people of Commorragh.

The Drukhari's blades did not find their mark, for none other than the Phoenix Lord Jain Zar appeared to meet them in battle. The peace talks turned to a fierce battle in moments, and the Ynnari were forced to flee before the people of Saim-Hann could be brought into the fold. 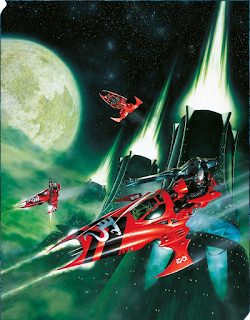 The Voyage Begins (ca. M29) - Saim-Hann is one of the first craftworlds to escape the failing and corrupt Aeldari Empire.

The Fall of the Aeldari (ca. M30) - The Aeldari Empire was torn asunder as Slaanesh is born from their depravities.

A Cruel Thirst (487-492.M39) - The Slaaneshi Daemon Prince Lilesh Snarelust slakes his infernal desire for excess, masterminding a vast daemonic incursion across a score of Imperial worlds near the Moon of Nightmares. Unwilling to permit such a foray into the material plane so near to their craftworld, the Aeldari of Saim-Hann responds with focussed aggression, risking all in the battle against the legions of the Dark Prince. Over the course of five years, the Windriders of Saim-Hann systematically outmanoeuvres and exterminate those loyal to the court of Slaanesh. Eventually, Saim-Hann’s high chieftain Nuadhu brings Lilesh Snarelust to battle at the daemon's corrupted stronghold, the so-called Sanctuary of Sins. Though Snarelust’s lethal handmaidens seek to intervene, Nuadhu's Jetbike riders keep them at bay with volleys of shuriken catapult fire. Leaping from the back of his Jetbike, Nuadhu plunges the legendary Celestial Lance into the Daemon’s heart, shattering its soul and banishing its essence to the hell from whence it came. Those Slaaneshi Daemons that remain -- and the Chaos-worshipping humans that are in league with them -- are mercilessly culled.

The Death of Gnosis Prime (786.M41) - The Imperial planet of Gnosis Prime is invaded by the Aeldari after a territorial dispute of epic magnitude. Despite having settled the planet some twelve hundred years previous, the human inhabitants are given an ultimatum by Eliac Zephyrblade of Saim-Hann -- evacuate or die. The Autarch's imperious demand is met by an extremely vulgar response. The Aeldari force is outnumbered a hundred times over by the Imperial armies, but the vengeful Zephyrblade makes the ocean his landing zone before running rings around the military juggernaut of the Imperium with his Windrider hosts. He cripples the planet’s industrial zones before leaving Gnosis Prime to a cruel and lonely fate at the hands of his Drukhari allies. 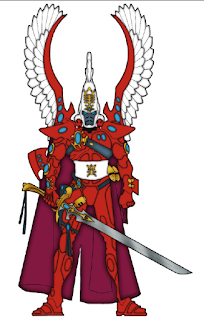 Nuadhu "Fireheart" - Nuadhu is a notable Wild Rider of Saim-Hann. In battle, he is known to ride upon a Vyper, known as Alean, The Steed of Khaine, that has been built to allow him to fight from its back, much as the bloody-handed god Khaine rode to war on the legendary steed Alean. He is considered reckless, even by the standards of his kindred, and pays no heed to danger, gladly flying into the heaviest enemy barrage. His Wild Riders willingly follow him into the fiercest fighting.

Eliac Zephyrblade - Eliac Zephyrblade is an Autarch of Saim-Hann who led a warhost of Aeldari and invaded Gnosis Prime in 786.M41. Claiming the world as their own, despite it having been under Imperial control for over twelve centuries, the aliens set about the systematic eradication of its billions-strong population. A full year after the start of the war, Wolf Lord Logan Grimnar and his Space Wolves Chapter arrived in the Gnosis System. When they found the doomed world, it was all but a graveyard. The Great Wolf vowed if he could not save the people of Gnosis Prime, he would avenge them, and so, the Great Wolf set course to Gnosis Secundus seeking revenge against the Saim-Hann Aeldari still in-system. At the height of the battle, Grimnar feigned a looming defeat in order to draw the arrogant Aeldari commander into battle. Though the two mighty warriors clashed blades, Grimnar was unable to take full advantage after having knocked the Autarch from his Jetbike by smashing its engine-core with the Axe of Morkai. The Great Wolf could only howl in frustration as the Autarch nimbly pulled himself up onto a passing skimmer. The two exchanged a final look through the rain before Zephyrblade and the surviving Aeldari fell back through a Webway portal. Though the Space Wolves had emerged victorious, it was a hollow victory as the Gnosis System lay in ruins whilst the Aeldari had escaped...at least for now.

Posted by Adventures with Peps at February 15, 2021