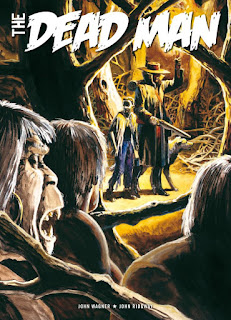 Welcome to this week's comic review. Lucky for you, I am merging two graphic novels together in this post. The first graphic novel is The Dead Man, and the second is Judge Dredd: Complete Case Files 14. Together they form the Necropolis saga - aka the return of the Dark judges some of my favourite 2000 AD strips. Let us dive in.

Tales of the Dead Man. Written by John Wagner and illustrated by John Ridgway.

"In the harsh wastelands of the Cursed Earth, Yassa Povey makes a gruesome discovery; the badly burned body of a dead man. But the 'dead man' lives and when Yassa takes him back to his village to help him recover, something evil follows. Soon villagers start dying and the Dead Man is sent into exile. Yassa follows, curious to know more about the stranger. However, it is a decision he will come to regret, as Yassa is plunged into a world of horror when the Dead Man discovers the shocking truth behind his identity!"

I remember reading this as a young child. Meaning I know the surprise twist. That in no way discouraged me from the entertaining read. Throughout, we watch Yassa unknowingly head straight into danger time and time again. What draws him into helping the Dead Man is never understood or explained, and we are left to believe he is just a pure soul. This is helpful as the Dead Man needs one to help face off against creeping horror that is stalking across the Cursed Earth. Now for the spoilers! If you wish to not know then stop reading now. The Dead Man is actually Judge Dredd, after taking the Long Walk he is attacked by the Sister's Phobia and Nausea and hounded across the Cursed Earth. By the end of the story, Yassa is left blinded by his experiences, whilst Dredd is ready to go save Mega-City One. This ending perfectly leads us into the Case Files Volume 14 which we will now delve into. 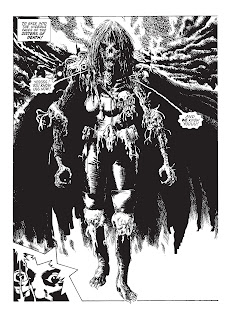 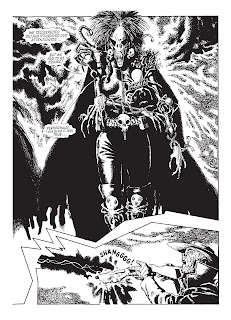 The graphic novel picks up straight from the above tale with Tale of Dead Man. Judge Dredd aka Dead Man is heading back to MC-1 and with his memory restored he starts to recall how this all happened. We learn of Dredd having severe doubts about the Justice System, his entire belief shaken beyond repair by a letter from a child. With doubts nagging in his mind Judge Dredd is forced to complete the training of Cadet Kraken, a former Judda and an actual clone brother of Dredd. During the final tests, Dredd realizes Kraken is flawed and fails him, before requesting to retire and take the long walk (leading us to the above Dead Man story). A great arc, for once showing that Dredd is only a human and that even he has doubts and fears. It also shows us an ageing Dredd, something not truly mentioned until now, but Dredd is noticing he is being slower with age. After this tale, we enter an official countdown of strips to Necropolis, a 5 strip countdown starting with Lethal Injection (which is technically 5 & 4 of the countdown). 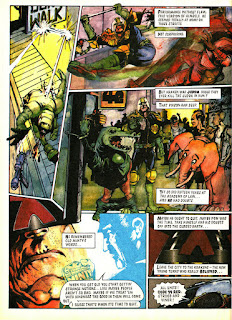 Lethal Injection; brings back the team-up of Wagner and Ezquerra and I am taken back to reading this series in my youth and it brings forth a giddy excitement. In this issue, we follow Cadet Kraken as he is informed of Dredd's decision. As Judge Odell tells Kraken the news, they load into a Department truck and head off to the Resyk unit, where Kraken will be executed. Wanting to prove he is a true Judge and not a failure, Kraken grabs the lethal injection and injects. Following his demise, Kraken's body is claimed by Odell and they head to the Grand Halls. Here we discover that Kraken was actually being tested one final time and has passed. Now with a street Judges uniform, Kraken speaks with Chief Judge Silver and discovers he is to be Judge Dredd's replacement! 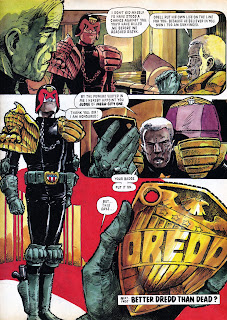 Countdown to Necropolis 3. Rights of Succession. Judge Kraken aka Judge Dredd is now on the streets. Fearing discovery of the deception, Chief Judge Silver is keeping Kraken working solo. The story is slightly a filler piece and spends most of the issue, working through Kraken's thoughts about the strength of a name. Ultimately he doesn't seem to care as long as he is serving the law. Kraken is growing on me, the only issue is I know what is going to happen, so I feel bad. 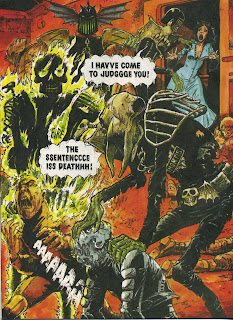 Countdown to Necropolis 2-1. Dear Annie. The last of the opening tales and more strangely zero Judge Dredd/Kraken.  The story opens with Chip writing a letter to an agony aunt style publication. Chip retells his concerns about his wife who had a run-in with Judge Death. Following her encounter she falls into a coma for days, upon awaking and returning home she is forever changed. Xena the wife becomes obsessed with Judge Death, believing herself to be his wife she plots to kill Chip. As we reach the end of the story Xena sacrifices Chip, this breaks her out of her hypnosis but it is too late the Sisters of Death are loose in the city.

Necropolis 26 parts. We are finally here, Necropolis. The Sisters of Death are loose in MC-1 and a chaotic adventure starts at Rowdy Yates in Dredd's apartment. The Sisters announce their present to Dredd and attempt to overwhelm him. The first attempt fails but they do manage to affect his mind and over time they wear down Kraken's defences until they finally control him. Now with Kraken as a puppet they use him to find a stronger host one PSI Judge Agee. 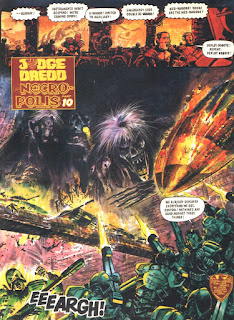 Judge Anderson discovers the plot and using her powers is able to force the information out of a confused Kraken. As the Justice Department mobilizes its might, the sisters strike. Within moments the Sisters have neutralized the force and have taken over Judge Kraken. Using him as a puppet they force him to attack Judge Anderson, but before he can finish the job Anderson is seemingly crushed by a tank! With Dredd in the Cursed Earth, Anderson dead and Kraken mind controlled the City is wide open to attack. With their new Judge Puppet, the Sisters use Kraken and the Tech 21 facility to bring the Dark Judges back from limbo, it would seem Judgement Day is here in MC-1. 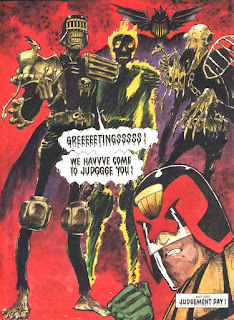 From this, we jump into the Cursed Earth. With the Dead Man revealed to be Judge Dredd, we join him as he heads back to MC-1. Annoyingly we must have missed some adventure as Dredd has a car and a new companion called Lumps. As they travel the wasteland they are ambushed by a crazed woman who turns out to be former Chief Judge McGruder. But this unlikely trio isn't the only would-be heroes. Inside the city, a group of rookie cadets let by Cadet Giant are attempting to get out of the city, as they flee through the ruined city they manage to grab the attention of Judge Mortis. In a terrifying chase through the city, the cadet manages to escape with the help of a well-placed grenade and end up in the undercity. Here the PSI cadet Ekerson, is drawn to a troggy encampment and with the help of the other cadets, they save an injured Judge Anderson. Seems like Ekerson wasn't the only one being drawn to Anderson, Judge Dredd was also arrived on the scene creating a dream team! 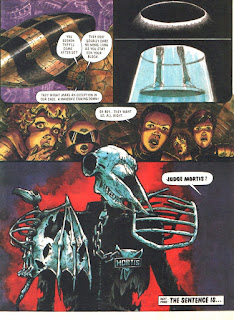 From here the story tempo changes pace. I feel sad that the story was so rushed in the end. Pretty much in one issue, Judge Dredd rids the dangerous sisters and leads the charge to capture the Dark Judges. Fear is the first, captured rather simply with bingo material, then Fire gets his body destroyed before having his spirit sucked into an airlock, Mortis's body is destroyed and Anderson traps him and finally Death fees into the undercity and is lost in the confusion. This only leaves us with one loose end - Kraken. Finally freed from Death's grip Kraken knows he has failed, facing off against Dredd he apologizes to his clone brother before Dredd executes him. This had so much more of an effect on me as a child, now as an adult, I am left a little disappointed by the rushed ending. I really wish it went on for another 10 issues and gave us a fuller and more complete story. Ultimately a great read, just could have been better - 4 out of 5 Clone Dredds. 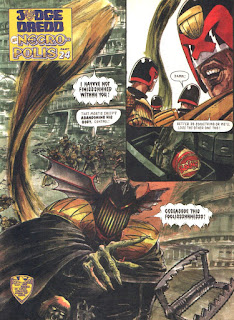 Posted by Adventures with Peps at January 19, 2021