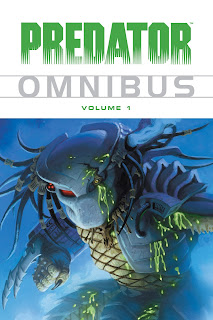 Time to dip the toes into the world of Predators. This time rather than trying to force my way through all the Dark Horse comics, I will be alternating between Dredd and predator for the next few reviews, so wish me luck.

To start off the Predator season we will kick off with 400 plus page, omnibus volume one. 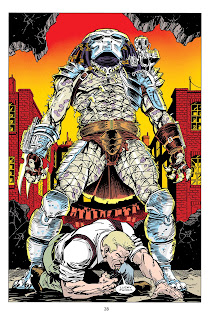 Concrete Jungle - The summer has hit New York City. As sunspots affect tv reception, crime rates start to soar. NYPD Rasche and Shafer (brother of Dutch Shafer aka Arnie in Predator) are on the scene of a brutal murder but as Shaefer investigates he discovers the killers are linked to his brother's disappearance. Soon we are knee-deep in Predators and Government Officials. A good opening to the book, the artwork seemed very 90's.

Cold War - The story jumps from the hot city to the cold Siberian wastes. A Russian team guarding an oil field is torn apart by a predator troupe, leaving Lt. Ligachev as the sole survivor. After a debriefing, Ligachev is sent back to discover who the killers truly are. Back in the states the Military have noticed the activity and are creating a team to go hunting, but first, they have to get Schaefer onboard. Now the two opposing forces have to face an unsteady alliance if they are to survive the Predators. Another solid story, a good start to the omnibus.

Dark River - Looks like it is time for round three of the Schaefer adventures. He managed to survive New York and Siberia, now he is once again chasing Predators but this in South America. It seems like the predator he beat in Concrete Jungle didn't die and now Schaefer has to correct his wrongs. Overall an okay story, I am a bit bored with the NYPD Schaefer stories now, but I am rather intrigued by the follow-up story of Dutch, will we ever find out what happened? 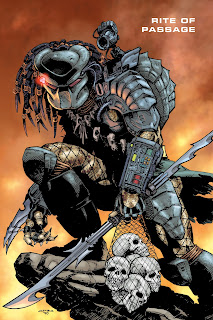 Rite of Passage - Straight up this was an exciting story as it had no writing, it was silent, no written words. It follows a plains hunter, who whilst hunting a wild cat returns to find his village destroyed. Tracking down the cause the hunter comes face to face with a Predator. Following an intense fight off the hunter wins and claims the Predator skull as a trophy. A great story really enjoyed this one.

The Pride at Nghasa - We seem to be on a theme. Once again we are in the plains but this time the Predator is hunting some Western hunters. The story was a good as the previous and a bit far-fetched, especially when all the wildlife came to attack the predator. A pretty average tale.

The Bloody Sands of Time - A nice attempt at providing background info to previous Predator visits. Following a mysterious tip-off an investigator discovers a diary from a French trooper, the logs take place  during World War One, and describes the interactions between the forces and a ghost (aka Predator). A fun story with the classic plot twist at the end. Rather enjoyable.

Blood Feud - The final tale in the ominbus. Set within the crowded streets of Tokyo, we meet a blind scientist by the name of Juta, who is working on an infra-red implant to assist with his slight. Juta is far from being a defenceless man, he has trained and honed his other skills to aid him. But following the discovery of his murdered apprentices, Juta starts having visions of a feudal time, when he believes in a past life he had slighted the predators and now they are back to event the score. Another fun story.

A great start to this series. All the stories are pretty solid and the main issue I had was the fact that the Schaefer tale went on a bit too long. I'm excited to see if the stories can stay this strong for the whole series or if like Aliens it will start to suffer from Quanity over Quality.

Have you read these? How is the rest of the series? Let me know by dropping me a comment below. Thanks for reading and continuing to support the blog.

Time for some links. All Amazon Links when purchased through give me a kickback, this allows me to purchase more books and comics and I thank you for supporting the blog: