Audio Review 17 // Valdor: Birth of the Imperium by Chris Wraight 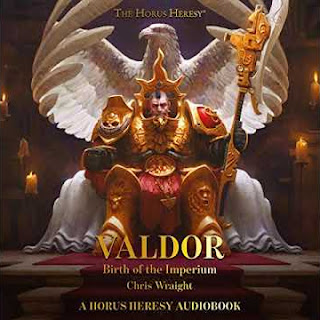 Who would have thought a Lockdown would help so much with my listening time? Well, here we are Ontario (Canada) is in a stay at home scenario. For myself not much has changed, I am still heading out to work every day as I have a hands-on role at the brewery. But, with less staff, I am able to enjoy my audible books more with fewer interruptions.

This week I sat and delved into the Valdor audible book by Black Library. Here is the official write up.

Explore the history of one of the most well-known heroes of the Imperium in this awesome new novel from Chris Wraight.

Constantin Valdor. It is a name that brings forth images of heroism, honour and peerless duty. For it is he who commands the will of the Legio Custodes that most esteemed and dedicated cadre of elite warriors. He is the Emperor’s sword, His shield, His banner and he knows no equal. Clad in shining auramite, his fist clenched around the haft of his Guardian Spear, he is the bulwark against all enemies of the throne, within or without.

Nearing the end of the wars of Unity, Valdor’s courage and purpose are put to the test as never before. The petty warlords and tyrants of Old Earth have been all but vanquished, and the Emperor’s armies are triumphant. What now for the nascent Imperium and what fate its forgotten soldiers, its Thunder Warriors and armies of Unity? A new force is rising, one which shall eclipse all others and open the way to the stars. But change on Terra is seldom bloodless and for progress to be ensured darker deeds are necessary.

I am left a little disappointed, I was expecting a Valdor heavy story. This is not that. Luckily though this is a great book of lore for an unknown period of time - the ending of the Unification Era and Terra as a whole.

The story is told through the eyes of a rather large supporting cast of throw away characters. Though they are interesting, we can't help but know they are just chaff to support the story progression and is hard to connect with them in such a short story. Also, the low page count of Valdor's perspective of the story is a bit of a letdown. It's called Valdor, I want Valdor!

Moving past these flaws the highlights in the story are the Thunder-Warriors, the explanation of why they existed, how they were flawed and why they had to be removed from history. It also shows the birth of the Space Marines and that even Valdor is unimpressed by them. We also get to experience the building of the Emperor's Palace and some of the Primarch program, which makes up for the faults of the novel.

If this had been called Birth of the Imperium: End of Unification, I would be giving it a 4 or maybe a 5 out of 5. Instead, I'm left a little disappointed so have to give it a 3.5 of 5. As always drop me a comment, or sign up for email notifications of posts. Using any of these links provided also helps to support my blogging adventures. Cheers!

Valdor: Birth of the Imperium by Chris Wraight

Posted by Adventures with Peps at January 16, 2021