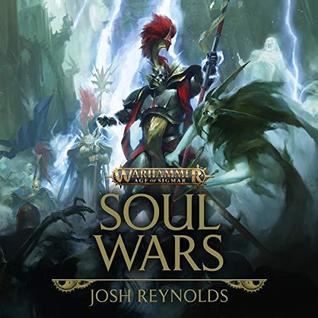 After the trip down memory lane with Trollslayer, I felt I needed to try some of the newer lore of Age of Sigmar. I know very little about Age of Sigmar and had heard good things about Soul Wars so here we are. Let us start with the commercial info: 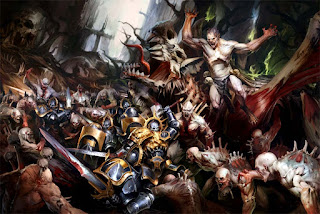 It is said that all who live to belong ultimately to the Undying King. In the shadowy lands of Shyish, Nagash, God of Death, calls forth his soulless legions to reassert his dominion. His dread advance begins with the free city of Glymmsforge, a bastion of Azyr in the Realm of Death. Standing between Nagash and his prize are the brooding Anvils of the Heldenhammer, an ancient host of Stormcast Eternals, and LordCastellant Pharus Thaum, guardian of the Ten Thousand Tombs. As battles between the living and the dead rage throughout the Mortal Realms, the War of Heaven and Death begins anew. But even Sigmar’s chosen may not be enough to cease the onslaught. For how does one destroy what is already dead?

Where to begin? I will start with the good parts, the good and the bad guys. Up first the God-King of Sigmar and his Stormcast Eternals, these characters call Glymmsforge their home. This city is a rare bastion in the lands of Death and is protected by Stormcasts known as the Anvils of Heldenhammer. These glorious heroes are reborn time and time again and this angers Nagash the villain of the piece. Nagash wants these souls for his growing army of undead and hopes to march his legions of the dead across the realms of the living to claim the souls of everyone. Here ends the positive part of the story. 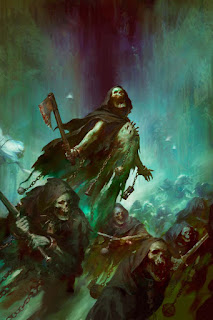 Ultimately this book was lacking throughout. Examples include, Characters not progressing or evolving, leaving you not caring what happens to them. The story also seems to continually repeat itself or lean into the same themes, which slowly becomes repetitive and dull. Now I know what the issue is, the author wasn't planning to make this book, he didn't have a story to write and wasn't given much to work with. He was put into a corner to create a tale that would help sell the starter set. This ultimately leads to a story that goes nowhere, no winners, no losers and an open-ended tale that is decided by the players when they play the game.

The story is sadly a miss for me. Have you listen to or read this story? Let me know your thoughts below in the comments or if you have the chance give me a follow. Thank you for stopping by, show support and feel free to use these links to start your own adventures. I get a kickback if you use the Amazon link, so thank you in advance.

Posted by Adventures with Peps at January 30, 2021