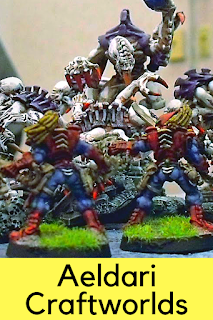 A work in progress post. Nothing original here currently, this info is all over the internet. But my ultimate goal is to create a more in-depth page for each craftworld and attempt to paint at least one figure for each one. Got a fan made Craftworld? Tell me the name and I will add to the list, if you have a blog or Instagram account tag in the comments so I can check it out.

Let us dive in a learn about Craftworlds:

Craftworlds are vast craft populated by Eldar. They travel through the void of space at sub-light speeds, carrying the greater remnant of the Eldar race after the Fall of their civilisation. Each Craftworld is a self-sufficient, independent realm with its own culture. Craftworlds are in many ways living entities, powered by psychic energy from its Infinity Circuit and responding in an organic way to the stimuli of psychic forces. The power within a Craftworld can be expended as light or heat, and most Craftworld technology could not function without this psychic power grid.

Prior to the Fall, Craftworlds were vast trading ships, effectively, whole self-contained communities housing hundreds of Eldar families. Trading missions could take the Craftworlds thousands of light years beyond Eldar civilisation, separating the community from its homeworld for centuries. This meant the Craftworld communities had already developed a strong sense of independence and self-reliance, so they remained mostly separate from the increasing decadence of their species. Because a Craftworld might return to the rest of Eldar civilisation only three or four times in a thousand years, it was easy for them to see the degeneration of Eldar society, while to the Eldar as a whole the slow degeneration was too gradual to recognise.

As the final weeks leading to the cataclysm approached, the returning Craftworlds' crews founding their worlds in ruin. Taking with them any Eldar who still remained sane, the Craftworlds fled the Eldar civilisation. Some Craftworlds were caught and consumed by Chaos along with the Eldar worlds as the Eye of Terror tore open reality, others survived for thousands of years before their people finally faded and died, while others endure to this day.

For thousands of years after the Fall to the current day, the Craftworlds have carried the greater part of the surviving Eldar. Craftworlds contain Webway gates, linking each other as well as to millions of planets, allowing the dispersed Eldar civilisation some measure of cohesion. Because the Webway is labyrinthine and impossible to map, many Craftworlds are effectively lost, unknown and cut off from the greater part of Eldar civilisation. They have grown greatly in size since the Fall, when they became the sanctuary worlds of the Eldar race. They are now approximately 10 to 100 times bigger in volume than they were before the Fall. Thus, Craftworlds are effectively worlds in space, each a self-contained biosystem, with forested and natural areas as well as urbanised ones. These natural areas provide a breathable atmosphere to the Craftworld and renewable resources. There are often sections that are uninhabited and awaiting reconstruction. Vast space docks located outside the Craftworld house fleets of spacecraft. These fleets are capable of travelling through Warp tunnels, allowing Eldar of the relatively slow-moving Craftworld to bring their forces to areas of the galaxy thousands of light years distant.

Every Eldar of a Craftworld is a highly trained warrior - in battle these citizen-soldiers are known as Guardians, forming the Craftworld's defensive militia. Craftworlds are independent realms, sometimes acting mutually, combining military forces, acting together to achieve a common objective, and trading or exchanging knowledge. Exodites often trade with the Craftworlds, but believe that the Craftworld Eldar are too close to the old ways of decadence for their own good. The militarily-stronger Craftworld Eldar grant some protection to Exodite Eldar.

It is known that the last Imperial assault against a Craftworld ended as a disaster at the Battle of the Blood Nebula, which saw the loss of an entire sector fleet thus leading to the Imperium adopting the stance of dealing with individual threats of the Eldar rather than provoke an entire nest of them. 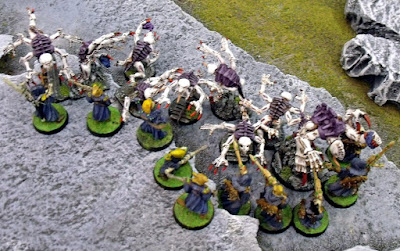 Amazon Link (yes I get a kickback, thank you for supporting me): Aeldari Guardian Squad.

Posted by Adventures with Peps at January 04, 2021