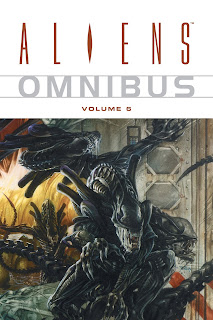 Finishing the year on a high. The entire Aliens omnibus collection is now read, reviewed and published. This has proven to not be an easy read. Though I love the franchise, this series has suffered from a lot of poor stories. Sadly, volume six falls into this category as well, a lot of stories in this issue should have been left on the editor's floor.

With thirteen stories to get through, we will move quickly and sweep those corners. 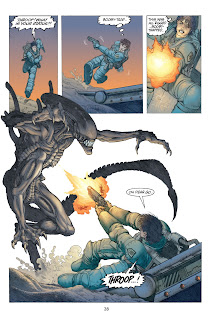 Apocalypse - A recurring author in the talented Mark Schultz and artwork by Doug Wheatley. The artwork is beautiful in this story and it is a great opener for this book. We have a return to LV-426 with Alecto Throop a strong powerful, female lead, who is hired to find Dr. Lucien. As the body count rises, the story gets Lovecraft creepy, with once more a deranged scientist, trying to find ways to control the xenomorph. Great story, great artwork, read it!

Once in a Lifetime - Mark Schultz once more with writing assistance from Phil Amara. Artwork by Rick Leonardi. Another Geholgod themed story, these guys are as bad as Weyland Yutani! A scientist is sent to investigate a world with xenomorphs that never grew from humans and see how they differ from human born ones. She seems to think the aggressive nature of the xenomorph may come from the genes of humans. An interesting idea, but a little rushed and not overly exciting.

Xenogenesis - Written by Tom and Mary Bierbaum and drawn by David Ross. Set further into the future, xenomorphs are a well-known threat. The companies are bored of them and now have specialist kill teams for extermination jobs. To be honest this is a poorly written story even in the xenomorph franchise. Teenage me may have liked it but he had terrible taste. Just skip it and move on.

Headhunters - Written by Mike W. Barr and drawn by Gene Colan, tells the story of xenomorph hunters attempting to claim some bounties on the death of the aliens. Pretty straight forward, basically a filler piece. Nice pencil artwork.

Tourist Season - Written by Beau Smith and drawn by Gary Morrow. A what I assume is a theme park-style planet, designed to represent the Wild West is under siege from Xenomorphs. Enter stage right the town sheriff for some gunslinging action. Basically, a tale to draw some cowboys - Yawn. 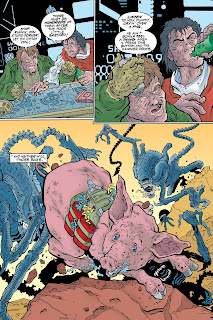 Pig - Script by Chuck Nixon and drawn by Henry Flint (amazing Judge Dredd artist). The story is about a bunch of space pirates attempting to loot a crashed spacecraft. The only problem is the planet is infested by Aliens. To solve the problem they decide to nuke the nest by strapping bombs on to a pig, nothing goes to plan for our pirates but it is one hell of a fun ride. Great story, fun artwork, love it.

Borderlines - Darko Macan and Tommy Lee Edwards team up on this tale. A weird soldier's tale of why we fight the aliens, the best line is "Their hunger of today or ours of Tomorrow". A non-offensive filler piece. Nice moody black and white artwork.

45 Seconds - Darko is back this time with the B & W artwork of Frank Teran. Great artwork on this one. 45 seconds is a tale of a colonial marine who has set bombs to go and blow up the Xeno nest. With only 45 seconds to get out the fear has his control. The ending is great and this is a solid piece. Very enjoyable.

Elder Gods - Story by Nancy A. Collins and drawn by Leif Jones. A lazy merging of Lovecraft and Xeno. Had the opportunity to be good, instead fell a bit flat by leaning too heavily into the Lovecraft theme. ie. Instead of Lovecraft, we have Loveless, instead of Cthulhu we have Tuulituu. Shame.

Purge - Script by Ian Edginton and Phil Hester on the artwork. A weird tale involving a science lab located on a remote planet. The lab specializes in the effects of alien impregnation on lepers. Turns out the defective human gene affects the alien to the point that they never leave the host. And actually, enhance their host in a positive way. Into this mix throw an android with DNA of a xenomorph gene and you are asking for trouble. A weird tale that I am not sure if I enjoyed or not, I find the android angle weird and annoying but the leper angle was definitely a fun spin. I wonder if we will ever meet these characters again? 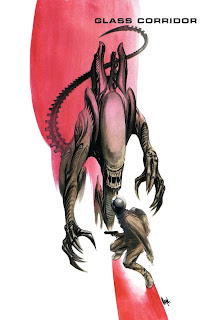 Glass Corridor - A rare one in the sense that it is written and drawn by the same person, David Lloyd. Following a hitman called Frank, we join him after he fails a hit. Frank stows away on a transport ship with the hopes of escaping, unfortunately, it turns out there is a Xeno onboard. This is a story of redemption and Frank becoming a hero. A nice story.

Stalker - Seems we have a bus scenario happening, we suddenly have a second written and drawn by the same person, David Wenzel. Basically a story of Vikings vs Xenomorphs. A fun story with beautiful artwork. The story ends with a colonial trooper armed with the blade handle of his Viking ancestor, about to board a Xeno infested colony.

Wraith - The final tale by Jay Stephens and drawn by Eduardo Risso. What happens when your campfire story turns out to be true. This is the theme of this tale. I have to honest this was not a great ending tale it felt and read I a weak-ass Creepshow story. It tried to be scary and then when you felt everyone was saved the twist kicks in. Below average at best.

Final thoughts for this omnibus is an above-average outing. Seems weird to think I've completed the range and I feel proud that I pushed through. Overall from volume one to six, the series has been all over the place. We have had highs like the initial story arc, then we also have had super lows (some even unreadable). But the one thing that has carried us through the entire series is the xenomorphs, I just love them. I also love the continuing threat of Weyland Yuntani, I wish they actually featured more. So where now? I feel it is time to move back to Judge Dredd and 2000 ad, maybe even Strontium Dog? Let me know what to read next in the comments below.

Amazon Link (yes I get a kickback, thank you for supporting me): Aliens: Omnibus Volume 6

Posted by Adventures with Peps at December 22, 2020