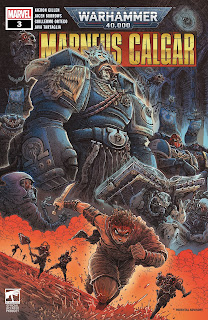 Well, well, looks like we have hit issue three of the five-part series titled Marneus Calgar. In my mind, we are now halfway through the series, the story has been set, the opening is finished, and a goal for the series needs to be set.

But first, let us get some bookkeeping out of the way, I would love a follow, plus a comment below, just to let me know I am not alone. If you haven't read either Issue one or Issue two reviews, you now have the links (your welcome).

Right with that crap done. Time to review issue three.

At the end of issue two, we discovered that the moon is in fact home to a chaos shrine devoted to Khorne the Chaos God of Skulls, blood, war and rock music. We also had a plot twist completely unexpected of Marneus being killed off, and his servant/friend - Tacitan, taking his name to honour the fallen friend. But now Tacitan is stuck in a cave to fight the followers of Khorne alone. Whilst, in the modern story arc, Marneus is preparing to fortify the Calgar estate and face off against the forces of the Despoiler.

Issue three, where to begin. I personally enjoyed it. It's still full of gore and violence, there is still a back and forth in the timelines, and there is still an annoying tech-priest sidekick (why is he in the story?). Starting with the modern story arc; Marneus leads his demi company into battle against the largest chaos cultist faction on the planet. This was a great few pages, getting to see a 40k agriculture machine was impressive, then watching Marneus pulp cultists is terrific and finally, Marneus reaches the control room his call for aid was priceless (how can you control anything with giant fists?). We then discover Marneus had purposefully announced the fact that the Calgar estate was unguarded, to tempt all the forces of Chaos to that one point so he could utterly crush it! This arc then finishes with the forces of the Ultramarines arrayed for war (just needed epic music in the background - drop a suggestion below, I'm thinking Bad Boys).

Now the important arc, the origin story set in the past. We pick up from the soul-destroying death of the original Marneus Calgar (RIP). Now alone, the young Tacitan has to start making some hard choices and seeing how much of the training stuck. After managing to lure the blood god's cultists out of the cave and killing a couple, Tacitan heads back in and sends off an emergency broadcast for help. Knowing nowhere is safe, Tacitan grabs some explosives and heads to the blood shrine. Now, of course, the cultist's leader expected this and attacks Tacitan. As all seems lost, a Space Marine Sergeant with a glowing power sword enters the fray and rescues Tacitan. Throughout the combat, bodies explode, blood follows and the shrine activates, opening a warp rift and ending that section for this issue.

With both timelines now complete, the issue is finished. Pros for me include fun art, gore, the wider experience of the 40k verse. Whilst cons continue to be a safe story, a bit dull and a stupid tech-priest. 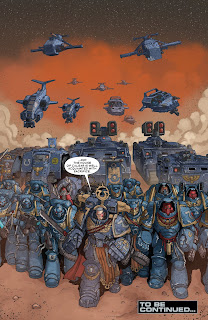 I would love to read your thoughts. Have you tried this comic series? Do you enjoy Ultramarines? Who else deserves a comic series? For my own preference, I would love to see a Yriel series, with him as a Corsair lord. Let me know in the comments. If you wish to support the blog hit subscribe or use one of the following links:

Buy the Comic (yes I get a kickback): Marneus Issue 3

Thanks for stopping by!

Posted by Adventures with Peps at December 15, 2020