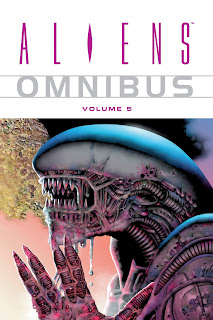 In space, no one can hear you scream! Lucky for us no one can hear my hit and miss reviews of these Alien comics. Well, we have hit number five in the six-volume series so our time is nearing completion. If you wish to read the other review please do follow this link.

Omnibus Volume Five opens with the creepy-ass cover. A drooling xenomorph, coloured in cool blues, purples and blacks. It feels very neon and 80's inspired, not sure that was the desired effect but I love it. The artwork is by Richard Corben, who I can only assume will be illustrating one of the ten tales inside. Yep, ten tales make up this volume, with over 370 pages this is a big book!

As always we will start at the beginning and deep dive into the graphic novel. If you haven't already please click the follow button or subscribe for updates, thank you. 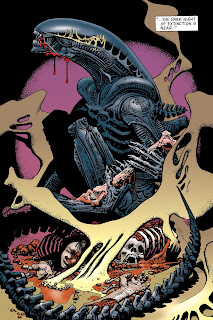 The open tale is by John Arcudi and drawn by Richard Corben (guess I didn't need to wait long for him to reappear). Another story based on region. This world was founded by a colony ship that fell of course, after a terrible virus was released killing all the adults. The world that grew around the crashed ship was built by children and their android babysitters. As the generations passed, info was forgotten and in time the people reached a medieval-style system. Now it would seem a cult has arisen and found the old android. Using his information the cult is growing xenomorphs and calling them the first father. It is up to the local police to solve what is going on and kill the monsters once and for all.

Not hugely taken by the art style of this piece, it felt lacking in detail which is a shame when you think back to the amazing cover.  Overall an okay tale.

This story was written by a team of two, Jim Woodring and Justin Green and the art is provided by Francisco Solano Lopez. Well, I can safely say this was a fail for me. The premise is some goons are attempting to collect xenomorph eggs for a scientist. During the egg scoop, they collect one infected with a virus that can even kill a xenomorph. The scientist realizing the danger to earth tells the goons to burn the egg and destroy it, but of course, they can't and so they head to an outer rim pleasure planet. Soon an infected chest buster is free and infecting the populous with a killer virus. Upon realizing what is happening a company man nukes the pleasure city to cover up the disaster.

For me everything was poor. The story was weak and dull, the artwork childish and sexist. Truly a waste of page space. 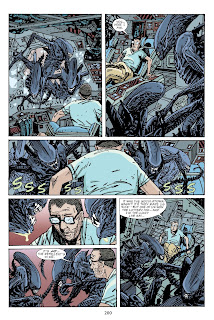 Hopefully, this can turn us around as we are failing so far on this comic. Written by James Vance and drawn by Guy Davis. Survival finally a good tale. We join a lone survivor in an escape pod and get to relive his story through hallucinations. Thompson is a Xeno - archaeologist and part of the crew sent to mine an outer rim world. During the flashbacks, we see how everything unravels and leads to Thompson's entomb in the escape pod. A sad tale of how the company manipulates the general workforce and how Thompson's final act wrecks the chances of humanity finding a safeguard against the xenomorphs.

Great story as I am sure you have guessed and the artwork is dark and gritty a style well suited to the story. This is what I want more of, please! 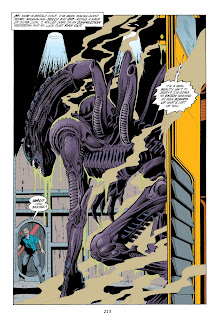 Script by Dan Jolley and Drawn by John Nadeau. This story follows ex-smuggler Gerald Coile and is set on Earth. Finally, mankind has outlawed Xeno-zip, but this has lead to the new underground drug trade. Coile, making quick money running the drugs to and fro has learnt that his boss Vasco is to be hit by the FEDs. Feeling the tides change, Coile sides with the FEDs and feeds them info on Vasco's hauler. With one finally, delivery to complete Coile arrives on the hauler to discover it abandoned and running on low power. In the hold is a recorded message - announcing the fact that he knew Colie had betrayed him, with the message was a gift, a full-grown Xenomorph!

Another great tale. This could have had a lot more pages given over to it as we watch a cat and mouse scenario take shape on the ship. Instead, it all happens a bit fast, the ending though was a true joy and I highly recommend this one. 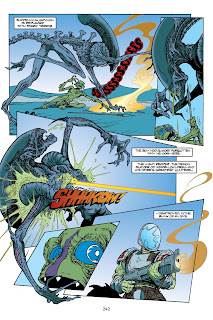 This tale is created by John Arcudi the writer of the opening tale and is drawn by Paul Mendoza. Finally hitting a rhythm. We are on an unknown world that is home to a tribal community, plighted by a xenomorph. The brave tribal leader collects some brave warriors and an unblooded to hunt the monster down. As in all classic Alien tales the shit hits the fan and soon only the unblooded brave and a badly wounded chieftain remain. They take shelter in a crashed spaceship and soon the unblooded discovers the source of the xenomorph and discovers a second Alien lifeform - Man. The newcomer fully armed and armoured ultimately kills the Xenomorph. When this man fails to share the trophy the unbloodied kills him, taking his helmet and his gun, before triumphantly returning to his village.

A double-headed feature for John Byrne, set in what would seem to the 50's or 60's. A young couple discovers a crashed craft in the woods and pulls out a pilot wearing an unusual mask. Turns out the unusual mask is in fact a Facehugger! The pilot underneath is an alien of unknown origin and soon a chest buster is on the scene. In classic horror/sci-fi film plots, multiple members of the town start to disappear and only the doctor fully understands what is happening.

This was a fun tale and great artwork. The only thing that slightly annoyed me was making the town doctor a Ripley ancestor. No real need for it and made the tale fall flat at the end. 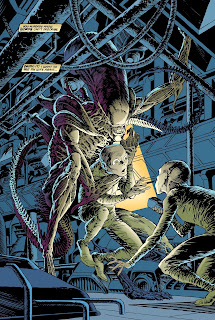 Tale seven is by Ron Marz and Bernie Wrightson. Once again we are visited by other aliens dealing with Xenomorphs but this time the story is told by a third party. Turns out the narrator is a scientist dealing with a crashed alien vessel in the Southern American jungle. Inside he discovers the alien bodies and the truth behind their deaths. Now he is alone leaving a message of hope, the hope that whoever finds the tapes will kill the Xenomorphs before they spread across the world.

Great story, a great lead up to what I think is a Batman vs Xenomorph tale. Another enjoyable tale.

The script is by Mark Schultz and has 43 artists working on it. What on earth am I about to witness. A weird tale of a body-hopping dead scientist, who assists the rescue team to survive the monsters. A strange tale interestingly told. Every time the scientist jumps host the artwork changes, sometimes this is a great experience, sometimes it is horrible, but overall an excellent story.

The last tale of the book. Lucky is written by Mark Verheiden and art by Mark A. Nelson. We follow the downfall of a salvaging ship as it picks up a derelict craft. Unfortunately, a greedy crewman fails to follow procedure and releases xenomorphs onto the ship. Soon the vessel is overrun and the only survivor is the greedy and cowardly crewman who caused all the problems. In classic self-serving behaviour, the crewman blames the whole thing on the first mate and is safely returned home. I enjoyed this one. It is not a long tale but it was very good at showing how the xenomorphs aren't the real villains it is, in fact, mankind that is the monster.

With Lucky, the book ends. I have to say this was a rocky one with a lot of sub-par stories that are just worth ignoring completely. But the tales that were good made up for the rest. So if you are a fan of the Alien franchise you may as well treat yourself and enjoy some otherworldly horror. As always thanks for sticking around to the end. Use any of the following links to help support the blog, cheers!

Thanks for stopping by!

Posted by Adventures with Peps at December 08, 2020