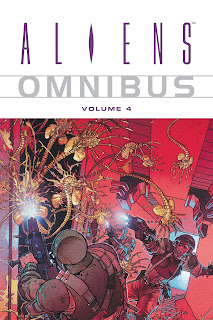 I am really enjoying these Alien comics. For better or worst, these stories inspire my imagination. The cover is a thing of nightmares, just imagine opening a storage door and facehuggers pour through! This tome is massive, clocking in at 376 pages. The omnibus contains the following stories: Music of Spears, Stronghold, Frenzy, Taste, Mondo Pest and Mondo Heat. Set in the far future most of these tales involve madmen who hope to control the xenomorphs and ultimately fail! I am excited to start, so like all stories let us begin with the opener. 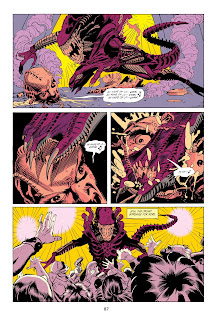 Music of Spears: Written by Chet Williamson and drawn by Tim Hamilton. The plot is a classic madman scenario, in this case, we follow a composer, Dean Eddington. This character is truly obnoxious and it is hard to find a valid reason to care about him. Eddington is attempting to create a new form of music by using the screams of a xenomorph. In the classic plot route, the xenomorph escapes killing a lot of people before itself is killed. The story has a weird ending, with the killing act, being recreated nightly to entertain the masses.

Ultimately a good enough story and a solid opener to the book.

Stronghold: Written by John Arcudi and drawn by Doug Mahnke. Set in a remote scientific world, this lab is not your normal research station. Inside is a full alien nest, which is maintained by a squad of Androids. Following a routine security inspection, it is discovered that the lead scientist is selling xenomorph eggs on the black market. Then the expected happens the aliens break loose and the death starts happening.

The highlight of this piece is the xenomorph android, Jeri. Designed to blend in with the xenomorphs, Jeri is constantly scaring the main characters, but when he gets a plasma gun his cool factor goes through the roof! 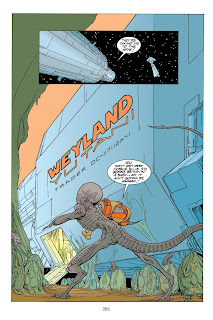 Frenzy: Written by the Legend John Wagner and drawn by Paul Mendoza. Now we have specialized eradicate teams (made up of ex-marine convicts), who get sent in to destroy hives. With some of the team members acting as bait, they allow themselves to be captured and taken to the Queen's lair. Once this happens MAX is released. A new hi-tech robot suit controlled by a convicted Marine this suit is a one-man army. The downside is the suit will ultimately kill the host. The story is fairly straightforward and is mainly about covering up the Companies errors. Expect robots versus robots.

Taste: Written by Edward Martin III and drawn by Mark Nelson. A rather short story focusing on an egg and the Facehugger inside. The story seems to build to the Hugger launching itself out of the egg. Then the plot twist. Turns out that in the wider universe there are bigger, scarier creatures out there, that enjoy frying Facehuggers for lunch!

Mondo Pest: Written by Henry Gilroy and drawn by Ronnie Del Carmen. Escaped psych ward marine turned merc, accepts a call for assistance from an outer rim world with seems to have an alien problem. Feels like a bad 80's film made into a comic. Lots of fighting, lots of action and a small bit of traitorous greed. A nice solid tale.

Mondo Heat: Seems like a doubleheader, Mondo our escaped psych ward turned merc is back. Still written by Henry Gilroy and Ronnie Del Carmen. I'm sorry but these Mondo tales seem like they were written by a teenage boy. But the high and low of the tale is a rich colonist who has lost his daughter and her friend, in a world infested with aliens. To make things worst it would seem the brother is jealous and was the reason the aliens are here!

With the end of Mondo, we have reached the end of this Omnibus. I enjoyed the escapism I got from this issue but just like the last omnibus, this is a huge hit and a miss. I enjoyed the Music of Spears and Taste, Stronghold and Frenzy were okay and the Mondo tales suck. So once again an average comic to help past the time.

If you have reached this far I thank you! Please do drop me a comment and have a look at the following links if you wish to support the blog in any way. Cheers.

Amazon (I get a commission, win, win): Aliens Omnibus Volume 4 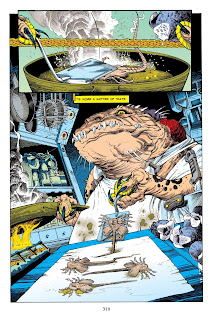 Posted by Adventures with Peps at December 01, 2020