Book Review 110 // Once a Stimm Queen by Robbie MacNiven 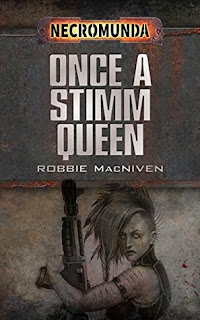 You know the drill. I'm stuck in the underhives of Necromunda, and my only way out is by reading these short stories. Today's tale, Once a Stimm Queen by Robbie MacNiven. These are the official details.

On a job for some Goliath clients, the juves of the Stimm Queens fall foul of the Enforcers, Necromunda's vicious lawmen. As they scramble to survive, things look bleak…

It's a tale of desperate survival against impossible odds, and the bonds forged in diversity.

No job in the underhive ever goes smoothly. Whether it's a rival gang taking petty revenge, an attack by mutated wild creatures or the perils of the crumbling hive itself, trouble lurks around every corner. So the Stimm Queens, on a job for some Goliath clients, never really expected it to run smoothly. But when the Enforcers, Necromunda's black-armoured lawmen, join the party, things look particularly bleak. A handful of juves try desperately to survive, clinging to vain hope and each other as darkness descends.

My Review
At twenty pages, this was an easy read. Very early on, MacNiven gives us a likeable character called Jannix, who as a Juve had a run-in with the Necromunda Enforcers and loses her friend Sy. With a backstory set, we jump forward in time, now Jannix is a full ganger, involved in a parley with the local Goliath gang. When the Goliaths fail to show, the Escher know this is a set-up. Soon Enforcers, are storming the building and the body count starts to rise, but who is leading the local Enforcers squad?
A great short tale, double-crosses, lost friendships and who is really the criminal in the underhive? I almost felt this tale could fit multiple genres and is a rehashing of multiple other tales. This is the only fault I had with it and ultimately I enjoyed the story. The writing was good, the pacing fast, a small easy to remember cadre of characters and my personal favourites; Goliaths. Well worth a 4 out of 5 ratings on Goodreads.

Amazon Link (yes I get a kickback, thank you for supporting me): Once a Stimm Queen by Robbie MacNiven

Posted by Adventures with Peps at December 18, 2020