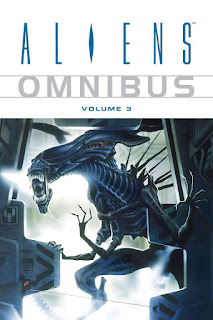 A great opening image on the cover of the Queen ripping open a doorway screaming. I can hear Ripley in the background saying, " Get away from her, you bitch!".

I'm excited to be on Volume three of these already, if you have not already, please check out Volume One and Two. Volume three has a lot of stories contained within: Rogue, Sacrifice, Labyrinth, Salvation, Advent/Terminus, Reapers and Horrorshow. With plenty of titles to review, let us dive in. 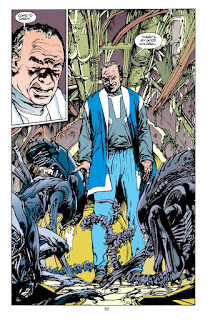 With a script by Ian Edginton, art by Will Simpson, it feels like we have stepped back into the 1990s. The main plot of the story is based around a mad scientist who is slowly feeding his staff to the aliens. His goal, to manipulate the alien DNA and breed a King Alien. In classic Alien fashion storytelling, the shit soon hits the fan with the Rogue King Alien on the loose killing everything in its path, but it seems this new alien has a goal in mind. To face off against the Queen, but can a king beat a queen? Hell no!

A solid tale, that I am sure is better as a novel with space to explain characters better and the driving force behind the crazed doctor. But ultimately a great opener. 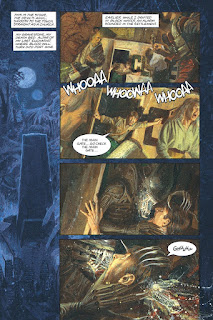 Story two is written by Peter Milligan and the art is produced by Paul Johnson. The artwork is beautiful, I recognized the style enough to have a google and yes, Paul Johnson has drawn for 2000 AD in the past. Great start to the story already then. The tale begins with a spacecraft crash, that mysteriously has only one survivor; Ann. Took in by the local colony, Ann starts to realize something is off and soon discovers the town is offering up sacrifices to a lone xenomorph in the Jungles. In the course of not fully understanding why they sacrifice child to the xeno, Ann affects the norm and leads the colonials into a deadly fight with the xenomorph.

Strange how many times the themes of family and religion come up in stories to do with Aliens. It is a great tale with amazing artwork, well worth the read, a true highlight of this book.

Story three, Labyrinth by Jim Woodring and art by Kilian Plunkett.  Once again a slightly unhinged doctor, testing out his theories on the xenomorphs. He believes that with the right mental attitude, a human can turn away a xenomorph without using a weapon! Of course not everything goes to plan, I feel this almost follows the same story arc as Rogue. The story though ultimately good, is not great. It delves deep into the aliens behavior patterns and how science can possible manipulate it. I was not a fan of the artwork, and the writing was a bit movie-style storytelling, focusing on gorey imagery rather than the fear factor. Not a great tale to be honest. 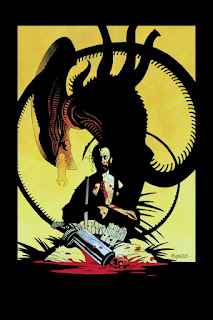 This tale I have reviewed before, so I won't rewrite it, all I will ask is for you to go check it out here: Salvation

Written by Anina Bennett and Paul Guinan, artwork by Paul Guinan. I would class this a mini tale. A pyramid of unknown design has been discovered and film teams and explorers are rushing to discover it secrets. Only problem is no team ever seems to leave. Not the worst story in the comic, but sadly a little throw away and filler. Nice to see as one team dies another arrives. 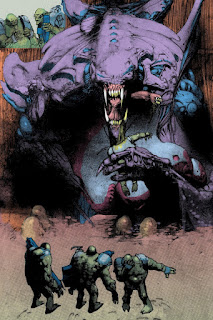 Written by John Arcudi and artwork by Simon Bisley (another ex-2000 AD artist). What a weird ass tale! No written script just art, lucky it is beautiful art. We watch as a team of green humoid aliens (Of unknown origin) hunt down some xenomorph eggs to sell back  at home. Why, I hear you ask? Well this race of aliens enjoys eating Facehuggers! Wierd artwork, weird story, just plain weird.

Written by Sarah Byam and artwork by David Roach. Set on Luna during the still happening xenomorph takeover of Earth. Once the gleaming city of the rich it is now infested with the poor escaping Earth's demise. Once more a deranged scienciest is at the centre of the tale and is virtually downloading the dreams to train Marines in combat against the xenomorphs. To be honest a bit of a weak tale for me, I can see it working as novel but as a comic it doesn't really work for me.

And with that we come to an end. Seven stories in this collection, I would say three solid stories: Rogue, Sacrifice and Salvation. One story was just plain weird: Reaper and three stories a little dull: Labyrinth, Advent/Terminus and Horror Show.

For me this seems to leave me with no choice but to say this is an average omnibus at best. I enjoyed Sacrifice the most it had a great theme going on and made the humans seem like the true villains of the tale. Have you read this story? Let me know your thoughts below.

Amazon (I get a commission, win, win): Aliens Omnibus 3

Posted by Adventures with Peps at November 24, 2020