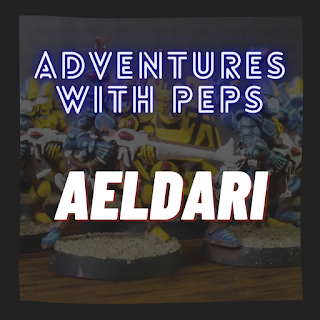 It's been a while since an Aeldari miniature post on this blog which is crazy (as I love aeldari). With that in mind, it is time to fix my error and post photos of the ancient Wraithlord Voice of Twilight. I feel like I have an addiction to Wraithlords, I just love the kit, over the years I've properly built over thirty and broken properly 90% of them. This time around I am showcasing a more current wraithlord, the second in my army with the first being Pheonix Lord Deathspinner. Though fun having a character type I knew I needed a more standard lord to bolster my army, and into this spot marches the Voice of Twilight. 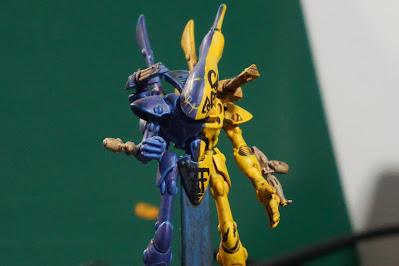 Armed with dual flamers and duel scatter lasers, I see the Voice as an anti-horde unit. Supporting the armies Guardian squads, like a bodyguard. I haven't personally played 40k since early 8th so I can't speak of whether this is a winning combo or not (got info let me know in the comments). But I personally love the thought of this vision of death standing over the living and acting like a loyal guardian angel. Maybe the spirit entombed is a loved one from the family lineage, come back to ensure the bloodline survives. 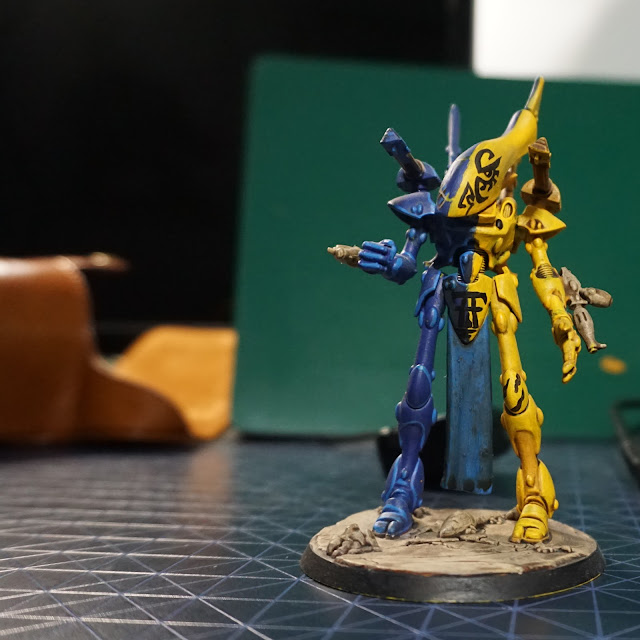 As far as painting goes I followed a scheme set down by an image of an Alaitoc guardian in the codex. I really liked the vertical patterning and thought why not Iyanden as well? To this, I added some freehand and some tiger stripes in hopes of linking him to Yriel and the Eldritch raiders. Still not a finished piece but finished enough for now.
I plan on one more Wraithlord build for the year based on a Bright Stallion titan (google it), but that model will have strong ties Ynnari, so expect some red. Watch this space.
As always thanks for stopping by and give me a subscription.
Posted by Adventures with Peps at October 05, 2020