Book Review 101 // Brothers of the Snake by Dan Abnett 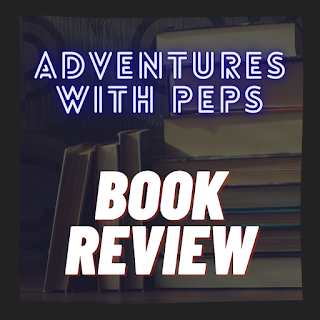 Welcome back and we are now safely into the hundred reviews now eek! Following on from my short read from last week I knew I needed a longer tale to get my teeth into, so I turned to my trusty shelf of Abnett for inspiration and decided it was time to crack open Brothers of the Snake. 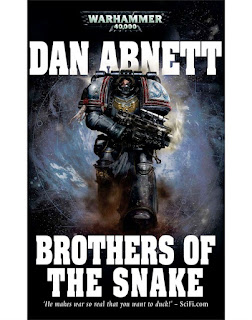 Written for Black Library this 320-page tome is set in the Warhammer 40k verse. Here is some commercial fluff:

Best-selling author Dan Abnett turns his hand to the mighty Space Marines! The war-torn far-future is laid bare as Brothers of the Snake follows the exploits of the Iron Snakes Space Marines as they battle against the enemies of mankind. First appearing in the pages of Inferno! magazine, the Iron Snakes Space Marines quickly gathered a loyal following and now they wage war in a full-blown adventure, battling aliens and heretics as they defend the Imperium.

So we can gather it is Abnett's first time writing solo for a Space Marine tale, but not his first story of Iron Snakes as I have fond memories of them being in the old Inferno magazine which came before this unless of course, that wasn't Abnett writing then? 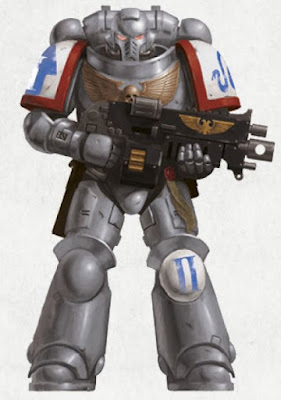 What I really enjoyed was that Abnett brings his own style to this book, though one long story it is technically a series of short stories merged into one. The lead character Priad start's on an Imperial World alone fighting Dark Eldar, it is this starting point that shapes the future of this character and the region of space known as the Reef Stars. We follow Priad through the stories watching him rise through his chapters ranks to become the leaders of a Notable Squad (Elite Veterans) before being sent back once more to that original world to fix an error made in that mission so long before.

The Iron Snake Space Marines and Priad, in particular, are a rare bunch of Space Marines as they truly seem to care about the human race, which is sometimes forgotten in other novels and the bonds of Brotherhood between them make them seem almost human (making them more like Salamander successors than an Ultramarine). Overall it reads like Abnett had fun creating this chapter, from it's Ocean wrapped homeworld, to the unusual organization of the chapter or the creepy Dark Eldar and Brutal Orks, this was just a great book. I can easily see myself picking it up again in a year to give it another read-through, great solid reading that is a must for any 40k fan.

As always thanks for stopping by and remember to subscribe!

Posted by Adventures with Peps at October 02, 2020