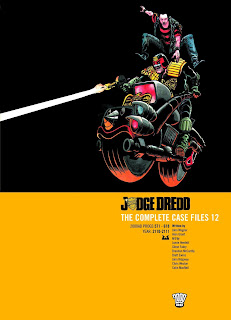 Welcome to part two of Judge Dredd Complete Case Files 12, want to read over part one? Head this WAY. So far the comic has been a pretty standard affair which seems about right as it lacks any major story arcs, but what it has so far succeeded in is world-building, and I hope it will continue into this the second section. So Drokk heads let us dive in!

Story - Strange Customs - A comical start to part two. Dredd is on custom duty and we get to see some of the weird and wonderful visitors of MC-1. The purpose of the Judges is to discover the smugglers and to stop them from getting through customs, we get to see sugar smugglers and animal traders, but the weirdest is saved for Dredd. Trusting only his instincts Dredd comes down hard on the tourist who keeps coming up clean. Soon Dredd pushes his luck and takes the poor tourist down to the surgery wing and performs exploratory surgery on him. Turns out Dredd was right and our tourist was smuggling body parts!

Highlight: The huge amount of body parts in this one man! A gallon of blood, two hearts, six kidneys, three livers, two sets of lungs, a windpipe, two spleens and twenty-eight metres of large intestine!! What on earth.

Story - Night at the Circus - The circus has come to MC-1 and as the crowds form Dredd leads a crime blitz of the entertainers. Following some classic Dredd rulings, the circus is ultimately closed down as all the performers are lead off to the ISO-Cubes.

Highlight: As the patrons complain about a refund, Dredd kindly informs them that they could be arrested on conspiracy to aid a felon. This soon shuts them all up. A great one-hit tale.

Story - Night at the Opera - Sometimes MC-1 can be classy and Opera 3001 is just such an event. This future modern opera is proving so popular that it has been sold out for 3 months. But never fear a good mugging will soon grab you a ticket and the attention of one Judge Dredd.

Highlight: A nice day in the life kind of tale, not heavy on Dredd but a great insight into the world of MC-1 and how opera has changed over the years. 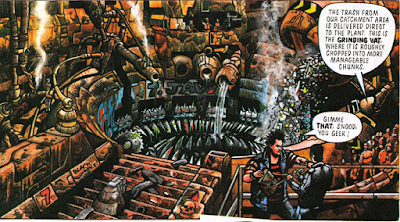 Story - Worms - During a school trip to the local waste disposal plant, a trouble-making youth causes absolute chaos by releasing a hoard of giant fang worms that start to eat their way through his classmates and teachers. Lucky for the brat Dredd is nearby when the alarms start sounding off.

Highlight: Story is told from the viewpoint of the youth in written form, whilst the panels actually show what really happened.

Story - The Further Adventures of PJ Maybe Age 14 - Following on from the earlier tale we catch up with the Grandfather of PJ Maybe dying of a rare non-curable disease. As he nears death PJ leans in and admits the truth that he has killed both uncles and the old man. With the Grandfather gone the business is now passed onto PJ's family. But before they can claim the business Judge Dredd drags the Maybe parents in for interrogation. Following hours of abuse, it is believed they had nothing to do with the deaths and they inherit the business.

Highlight: PJ continues to be ignored by the Judges as he just seems like a dumb Juve. When will Dredd connect the dots? 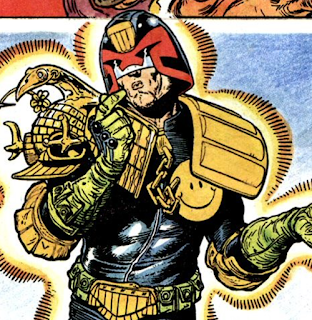 Story - The Power of the Gods - A bit of a weird one, the Gods (that don't exist) of MC-1 place a wager on whether an ordinary citizen would make the world a better place or not. Of course in comical fashion things go a bit wrong and soon Dredd is on the scene. But how can Dredd defeat a human with the powers of the Gods?

Highlight: Judge Dredd being a nice guy! That's right our mean man of justice is a changed man and even smiles at one point. Completely terrifying.

Story - Eldster Ninja Mud-Wrestling Vigilantes - Four Eldsters have had enough of Juves praying on the elderly and decided to become Vigilantes. Unfortunately for them, Dredd hates vigilantes as much as a criminal!

Highlight: The use of mud to assist the eldster's lack of speed and how quickly Dredd can overcome them.

Story - Accident Prone - A full moon always brings out the kooks of MC-1 and this tale is no different, following our would-be hero we experience the painful full from grace, accident by accident. Once is an accident but three times, better call the Judges.

Highlight: The weird crazy looking fire crew bots. Not sure if they have a pilot or not but they make sense for such a crowded city to use this type of robot. 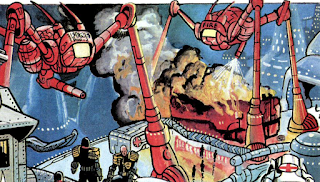 Story - Curse of the Spider-Woman - Eleanor has been diagnosed with Arachnid Gene Virus, a super rare disease that turns the victim into an actual spider! Soon the virus is speeding up causing Eleanor's hands to form into claws, extra limbs to form and the slow decline in mental processes. Soon Eleanor's husband is left with no choice than to send her off to a Cursed Earth specialist.

Highlight: A depressing insight of the MC-1 health care system (or lack off), it seems even harsher than it is ruled she is a mutant and given only a week to leave the city! Can't wait for the follow-up tale happening soon in this book.

Story - Alzheimer's Block - A bit of a depressing tale of Euthanasia and how it is needed to keep the city surviving. Sadly in the future, once the elders have passed a certain stage of life they get a visit from the Black Bag man and pass away!

Highlight: I like how this was the starting point of a character who will appear 20 years later in the comic, the mass killer Oola Blint the Euthanasia Rep.

Story - Tyger, Tyger - What happens when a crazy citizen purchases a cloned Saber Tooth Cat? Chaos the answer is always chaos! A short one-shot story showing just how bored and crazy the citizens of MC-1 can get.

Highlight: Two citizens being fined for making out in the walkway, 500 credits seems a bit steep. 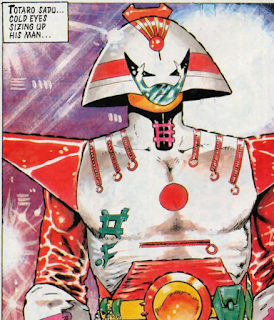 Story - Our Man in Hondo - Yes! We are escaping MC-1 for a story. In this great tale, we get to visit another Mega-City, Hondo City. Hondo City is the Japanese MC-1. A melting pot of cultures as the Judge System feels more little the samurai of old, whilst the city itself is forced into the Western world of capitalism. Dredd is sent to Hondo City to help assist a trade deal between the two cities but is soon sucked into a crime. Why would an average worker suddenly start killing high ranking Hondo officials and what is the link to MC-1?

Highlight: As you can possibly tell I really enjoyed this story, I like the idea of sleeper agents and I can imagine superpowers attempting to do everything in their power to keep their dirty secrets hidden.

Highlight: Written in the style of Poe's Nevermore poem. Nicely done and fun artwork felt like a Halloween tale.

Story - That Sweet Stuff - The classic tale of citizen meets sugar and all the damage it can cause in between.

Highlight: Fun little one-shot tale giving us another classic retelling of how sugar is bad.

Story - Spock's Mock Chocs - Okay, okay I frakking love the artwork on this. It's bold, bright and amazing and by Jamie Hewlett. Spock Mock Chocs have a nasty habit of making 1 in 10,000 into a biting crazy madman. With the Chocs being on sale long enough the effects start to show themselves and 150 people start showing the symptoms of bite craze. Now it is up to Dredd to stop the disaster from happening.

Highlight: It's got to be the Artwork, Hewlett style is so amazing and one I have loved for a long time. I fight anyone who disagrees (Ha. I would never fight but maybe strongly argue the case).

Story - Crazy Barry, Little Mo - Little blue Mo, the demon inside of Judge Kurten's head, hates lawbreakers and feels the Judges are too soft! Well with the aid of Kurten maybe Mo can turn things around.

Highlight: Dredd getting bested by Mo and Kurten, I am excited for the follow-up story that I know is coming.

And with that, we hit the end of Case File 12. It was a fun blast, definitely a big comic needing the two parts. The standout tale for me was Hondo adventure and it makes me want to seek out the comics I know are written in that area. Maybe I can find some and do a review soon. The Hewlett artwork on the one tale was also amazing, it is making me want to hunt down some Tank Girl comics as well. If you are interested in me doing some Tank Girl let me in the comments below.

As always thanks for stopping by!

Posted by Adventures with Peps at September 22, 2020