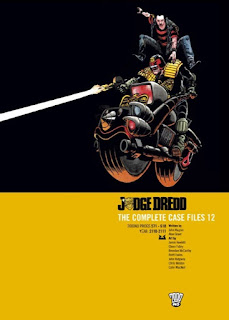 I have got the urge again to enjoy some Dredd! So I am following on from Complete Case Files 11 with number 12 (Huzzah I can count). The stories come from 2000 AD progs 571-618 set in the Years 2110 till 2111. It's a big book, so big in fact that I am splitting it into two parts. So sit back and enjoy the first half with some of my favourite panels and then hopefully I will part two up next week. 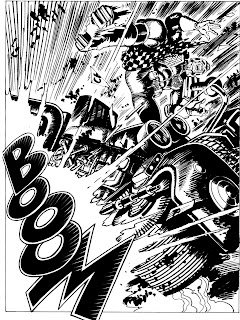 Story - Hitman - Dredd has become the main attraction for one Jeffery Jacobi an MC-1 hitman. Having originally wanted to kill Chopper he missed his chance when Dredd allowed him to escape. Now Judge Dredd is replacing the kill and is barely staying ahead of the hitman.
Highlight: Judge Dredd gets beat up in this story, first he is bombed and ends up with a wooden stick through his chest then he is shot through his badge. With poor Dredd ending up in the hospital with a cracked skull and needing a replacement lung.
Story - Simp about the House - A follow-up tale to Nobby the Simp from Case Files 11. It would seem wedded bliss did not happen for this unlikely pairing and following the sixth domestic argument, Judge Dredd forces them into divorce! Discovering life alone is near impossible Nobby forces his way back into his old apartment and into trouble. Soon Dredd is coming to arrest the simp, fearing capture Nobby cleverly hides from detection and fakes an escape but in doing so is trapped by his long-suffering wife, who the nails the hiding hole shut trapping the simp in the floorboards. Seems like the couple will be staying together after all!
Highlight: The poor goldfish suffering an ill fate in the Black Atlantic.
Story - Skeet and the Wrecking Crew - Truck driver Skeet has been told one rule about driving the big rigs; Never leave the cabin. One night whilst driving Rosie (a truck), Skeet ignores the rule and leaves the cabin to check on a person lying in the road. Unfortunately for Skeet, it is an armed wrecking gang who raid the goods onboard before destroying Rosie. Having recovered from his injuries Skeet is in a pit of despair after discovering Rosie is to be junked, following one too many synth-ales Skeet takes Rosie for the last spin - hoping to get revenge before Dredd can catch up.
Highlight: A sad but lovely tale, that can only end one way Skeet doing time for murder.
Story - The Gaia Conspiracy - All across MC-1 a new (or old) cult has surfaced, the worship of Gaia. Soon Dredd is sent to get to the bottom of it and enlists the help of PSI Judge Corey. Whilst attempting to discover the truth the worshippers release Kali the Goddess of Death! Only through Dredd's quick thinking is the goddess laid to rest and the worship of Gaia outlawed.
Highlight: As a form of religion the worshipers are sentenced to live in the Cursed Earth, but where they tread plants grow, a lovely nod to the fact that Gaia is the goddess of life.
Story - The Blob - A one-off sci-fi late-night special. Something unseemly has snuck into the MC-1 docks and is devouring all in its path. But how do you stop a gelatinous blob that can absorb physical harm so easily?
Highlight: A very fun short tale, I like these shorter tales as it allowed us to see a different side of MC-1 life in a funny and charming way. 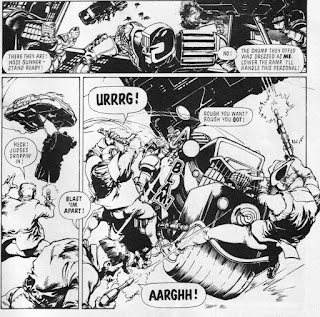 Story - The Fall Guy - Set in one of my favourite locations Pie in the Sky, Don Pesci is celebrating his 100th birthday. During his surprise Judge-a-gram, Pesci kills the actor thinking them to be a real Judge. What follows is a comedy of cause and effect as the falling body hits bat-guilders and sky surfers as it heads to ground level.
Highlight: Don Pesci wanting to relieve his younger glory years. You're never too old to kill a street Judge.
Story - The Blockers - A short one-shot tale following the day to day life of your average citizen. Stupid and funny. A bit of a filler piece but worth the page space.
Story - The Sage - A sage has arrived at the gates of MC-1 seeking enlightenment. Unfortunately for him, Judge Dredd doesn't seem to be convinced. Facing every possible terror the Judges can throw at him, they admit defeat without breaking the wise man. Believing to have now gained entry to MC-1 the wise sage is disappointed to discover that he is being thrown out of the city once more.
Highlight: The little wise man punching Dredd. A great panel and worth the price of admission.
Story - Full Metal Jacket - Dog Deever local gang member has been gunned down and discovered by Judge Dredd. After recovering, Deever withheld information on his attackers and ended up serving three years. Now released Deever is determined to regain his gang and get revenge on the guys that originally shot him.
Highlight: Great multi-part tale and artwork, I enjoyed the fact it was Dredd light and instead showed us the working mind of a gang member. Would love to read more tales like this one. 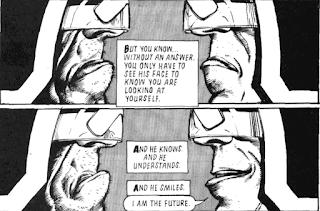 Story - Bloodline - With this story, we start to see the fall out from the OZ storyline from Complete Case Files 11 and of the Judda. A tale of two halves the first follows Kraken a clone of Fargo (aka like Dredd) who is actually a captured Judda, believing he has escaped from a Judges Holding Cell he attempts to get to a Judda safehouse and enact revenge on MC-1. The other tale is Judge Dredd who is getting visions of a safe house and Judda and has to investigate. Here begins the story of ageing Dredd and his would-be replacement.
Highlight: One of my favourite story arcs in 2000 AD is based around Kraken so I know what is coming, but for me, it is the first time reading this tale and I am excited to see it continue!
Story - Bat Mugger - In the future where money is hard to obtain legally, some very intelligent people will do stupid things to fund their passion. So what are you to do as a failing artist, when you are incredibly skilled at mugging and bat gilding? That's right start a crime wave.
Highlight: This is a great Judge Dredd tale and for a while, it seemed like the main villain would get away with his criminal activity. But as is always the case, he gets greedy and ends up on Judge Dredd's radar. Love a good bat-glider character and this one hits it out of the park.
Story - Hottie U - Hottie U the dumbest Frat in MC-1. They leave the newly recruited member in a rough sector just with a grill and some Hotties, the new recruit then has to earn their way back to campus. Judge Dredd knowing the danger of this sector, offers the student a ride home. But when the foolish student turns down the offer Dredd decides to hang around.
Highlight: The Frat boys getting carjacked whilst they watch the newbie get beaten. The ending is also so comical. It is a nice comic relief from the darker tales in this collection. 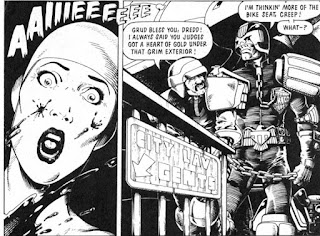 Story - Brainstem Man - Judging by the writing style this new monster on the block was once human or it is controlled by a human? The tale talks of allowing your animal side free, to hunt, to kill, rules of the jungle. But what happens when this wild creature meets Dredd? Unsurprisingly it results in the creature's death, leaving an unexplained case open for Dredd. A rare story indeed that I can only guess will continue later. 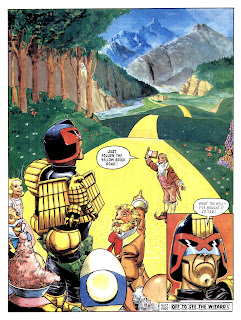 Story - Twister - Jug Mckenzie three times Supersurf winner is in the southern outskirts of MC-1 hoping to ride the Big One. The name was given to the radiated twisters that curse this zone. Whilst keeping an eye on Mckenzie Dredd is lucky enough to be on hand when a gang of outlaws kidnaps Mckenzie. In the upcoming chase, Dredd destroys the criminal's car and is about to make an arrest when he is sucked into the twister. Suffering head trauma Dredd believes himself to be in OZ and suffers a trippy experience as he goes on to capture and kill the gang and save Mckenzie.
Highlight: Great way to introduce more colour pages to the comics then by ripping on the idea of the Wizard of Oz. Loved this piece.
Story - What PJ Maybe did - Catching up with PJ Maybe is always a blast. The last time we encountered him he was randomly getting away with murder and even outsmarted Dredd. Looks like PJ is up to his tricks again but this time is taking on his uncles and Grandfather, as he attempts to put control of the trouser business into his father's hand.
Highlight: The idea that being thirteen means being ignored by the adults, making it surprisingly easy for PJ Maybe to get away with murder. Can't wait for more of this tale.
And with that tale we finish part one of Case Files 12. Seeing Kraken arriving on scene seriously excites me as I know Necropolis is coming soon, along with the sisters of death and the dark judges.
What story of Judge Dredd do you all enjoy? Drop me a comment below and I will work on part two for next week. Thanks for stopping by.
Posted by Adventures with Peps at September 08, 2020