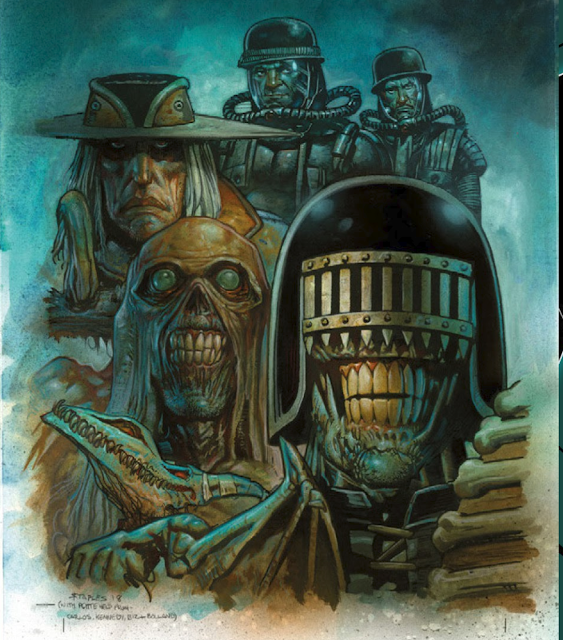 Leaving the 1990's behind I have moved forward and back into the mainstream 2000 AD verse and I am starting with the villain's issue. This issue has five stories available spanning a few of the different story arcs and I am excited to dive in so let us do it.

Judge Death // The Judge who Laughs

Up first everyone's favourite Mega-City One Villain from another Dimension Judge Death. The story begins in ISO Block 666, the home to the weirdest badass of MC-1 and possibly the devil (a silly Halloween story). Judge Death has escaped his containment cell has processed the body of a Judge. But he is not trying to escape, instead, he seeks out the therapy Judge to help him understand his dreams and why he is always haunted by Judge Dredd. Turns out Judge Death views Dredd as an equal a fifth Dark Judge, one with a kill tally of incredible numbers.

A fun short story, nice artwork and plot that has you wondering if Death is right

Brass and Bland // The Professionals

Time to hop on over to Nu Earth and into the time stream of Rogue Trooper. Set in the last city untouched by war we find our bodylooters awaiting a Mercenary group who they have promised to show some merchandise to. Turns out the Mercenaries where the missing component to make a squad of battle droids fully operational!

Great story of double-crossing, betrayal and robots. I really should pick up the Rogue Trooper books and review them. 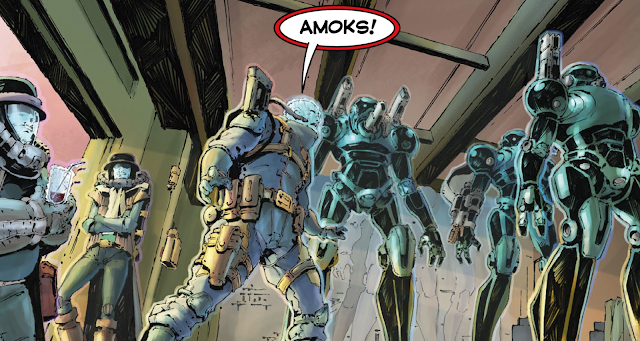 The Lord Weird Slough Feg // Lord of the Hunt

A bit of a classic campfire horror tale set in the world of Slaine. We learn how Lord Weird Slough Feg has been worshipped for 20,000 years. In exchange for a third of the local children, Feg will ensure the crops grow and reward the followers a bountiful harvest. That is until Slaine turns up and ruins the fun.

A bit of a weird tale as the villain is once more thrust into the support role to the main character. Slaine is fun and everything but would be nice to see Feg get a win. 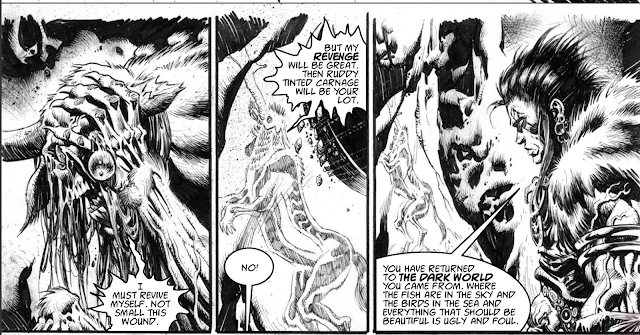 Set in the Strontium Dog verse, we meet a Stix (A mutant Clan) who wants a bedtime story, the mother retells a tale of Tyrus Stix and how he managed to kill the infamous Johnny Alpha - unfortunately for Tyrus, it was not how the story played out and Stix Bounty Hunter actually died to a self-inflicted gunshot wound.

Great story and solid artwork to join it. Once again I have ignored the Strontium Series for too long I need to fix this mistake.

Tharg's Terror Tales // The Last of the Hellphibians

Finishing on a Tharg's terror tale, these stories are infamous for a plot twist and with artwork by Henry Flint it was always going to be a winner. The story describes the Hellphibians, monsters created by the local industrial waste, now a weird looking frog/human hybrid these creatures lack males to breed, and adventure out of the swamp to search for mates. Upon finding the locals males in the nearby pub the Hellphibians decide they would rather die-off than breed with the repulsive humans.

Overall a great 2000 AD magazine, all the stories bought interesting twists and gave me a smile. Winners for me include the Hellphibians and Judge Death stories, whilst Feg misses the mark with Slaine stealing the limelight too much. This issue then finishes with one final panel, a fitting art piece for the deceased Carlos....RIP to such a talent.

Links to other fun projects: Linktr.ee/Adventureswithpeps 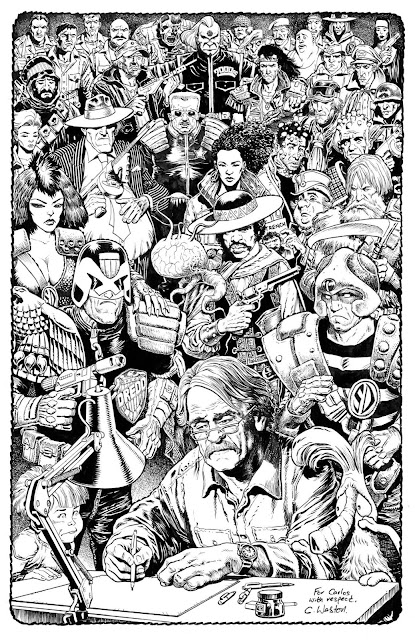 Posted by Adventures with Peps at September 01, 2020