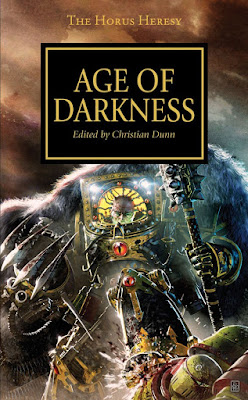 Welcome back blog readers, today we stay in the realm of Horus Heresy and dive into the Age of Darkness. This novel was made up of multiple stories by some great Black Library Authors.

Commercial Fluff: After the betrayal at Isstvan, Horus begins his campaign against the Emperor, a galaxy-wide war that can lead only to Terra. But the road to the final confrontation between father and son is a long one – seven years filled with secrecy and silence, plans and foundations being formed across distant stars. An unknown history is about to be unveiled as light is shed on the darkest years of the Horus Heresy, and revelations will surface that will shake the Imperium to its very foundation...

Commercial Fluff: Roboute Guilliman has put the finishing touches to his great work – the Codex Astartes. This tome will show his Ultramarines how to deal with any tactical situation, no matter the foe. But as the Horus Heresy reaches Ultramar, Captain Ventanus of the “Troublesome Fourth” must test the strictures of the Codex Astartes against the one foe that the primarch never expected: other Space Marines.

Review: An interesting story showcasing the Ultramarines trying to engage in warfare using the Codex Astartes. When it comes to the final battle versus the Sons of Horus, the Ultramarines ultimately fail and when Remus questions why this happened the Primarch clearly states the Codex is a tool of reference not a be all and end all. Something that was definitely lost in 41st Millennium were chapters view it as the holy word.

Commercial Fluff: News has reached Town Forty-Four, on the tranquil world of Virger-Mos II: Terra has fallen, the Emperor is dead and the Imperium belongs to Horus Lupercal. As the people of Forty-Four struggle to deal with this revelation and the rest of the planet falls into anarchy, Leon Kyyter begins to doubt the news, along with the stranger from Terra, the remembrancer with the odd tattoo...

Review: This was an intriguing story about what is going on in the galaxy. We know there is a war waging, but what is happening on the worlds of no strategic purpose? Turns out special agents (aka Alpha Legion) are spreading out, creating Pro-Horus movements to subvert worlds to the cause or to start open warfare and weaken the core strength of the planet. Great short tale.

Commercial Fluff: The planet Bastion must decide whether to remain loyal to the Emperor, or side with the rebel Horus. The Warmaster’s case is presented by an iterator, a master of persuasion. The Imperium has sent the Space Marines. Heka’tan and Arcadese must set aside their warlike natures and learn to be diplomats, or risk losing the world. But Horus wants the world, and a plan is in motion to ensure that the Space Marines fail in their task.

Review: When I saw the title I assumed it would involve Space Marines from the heavily damaged chapters (Salamanders, Iron Hands and Raven Guard), and I was kind of half right. A Salamander and a wounded Ultramarine head to a planet in an attempt to persuade the rulers to side with them in the war ahead, but the aides of Horus are there doing the same and soon the debate becomes heated. Whilst this is happening the Salamander discovers that a more sinister plot is forming in the shadows and that they are all at risk. Great tale never really thought about either side having to petition worlds to aid them, but it is a realistic idea and Nick Kyme always writes a good Salamander. 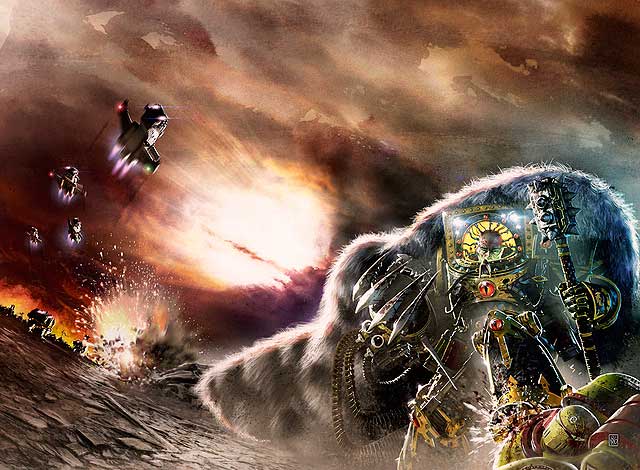 Commercial Fluff: In a secret fortress on the dark side of Titan, Rogal Dorn and Iacton Qruze meet with a prisoner. That prisoner has a tale to tell, of heroes and monsters, of honour and treachery, of life and death. He has stood at the side of the Warmaster himself, and he has a message for the Imperial Fists primarch. But can he be trusted? And can he be allowed to live? Rogal Dorn must decide the fate of the last remembrancer.

Review: Remember the remembrancers? Seems like an age since we followed the early days of enlightenment and heard the stories of how they annoyed the Space Marines. Now we are down to the final one Voss. Currently held in a prison on Titan, Voss must now face off against Dorn if he is to get his final story out. This was an amazing story and ends so bleak and depressing, loved it.

Commercial Fluff: Captain Kalliston of the Thousand Sons, taken captive in the shattered ruins of his homeworld, is tortured and interrogated by an unseen foe. He is sure that he knows the nature of his captor, and plays a dangerous game to get him to reveal himself. But the truth is very different – and far more dangerous – than he thinks, and he is in more danger than he could possibly imagine.

Review: The perfect follow up to the Fall of Prospero. One of the wayward Sons of Magnus has returned home in the hopes of finding answers, unfortunately, for him, he finds new foes. It is at this point we get a twist and the story changes from being about the Thousand Sons and turns into a World Eaters short. We get the all star character of Kharn reappearing again finally and we start to see his turn to darkness and the beginning of his fall from grace.

Commercial Fluff: The Raven Guard have arrived at Isstvan V to rescue Corax and other survivors of the treacherous Dropsite Massacre, but the enemy still encircle the world. As starships clash in fierce void war and the life of a primarch hangs in the balance, the key to victory lies in the hands of one Space Marine in the rebel fleet, a warrior who is not what he appears.

Review: Another World Eaters novel! Two in one book and back to back, what is happening? In this tale, we experience some politics and how not all the Marines are seemingly on the same page about this turn of events. When the World Eater captain almost ruins the rescue attempt the Raven Guard is saved by an unexpected ally (Alpha Legion). But why would the Alpha Legion want to save the Raven Guard Primarch and why do some the Raven Guard survivors seem a little off?

Commercial Fluff: “Little” Horus Aximand is uneasy about the direction that the Sons of Horus have taken. As he leads the Warmaster’s forces in their attempt to bring the mausoleums of Dwell under their sway, he faces his own doubts, the planet’s natives... and Space Marines of the Iron Hands. As battle rages with his erstwhile brothers, Little Horus faces a challenge that will change his life forever, if it doesn’t end it altogether.

Review: The mournival is broken and Little Horus is troubled by the past and what is to become the future of the Legion. It would seem the glory is fading for him and if he is not careful Abaddon will purge him from the legion as well. What would you do? Try to keep to your beliefs or fall in line and run into damnation with your legion?

Title: The Iron Within - Rob Sanders

Commercial Fluff: Years ago, the Iron Warriors left Barabaras Dantioch, a crippled warsmith, on the world of Lesser Damantyne. Now, having declared their allegiance to the traitor Horus, they have returned. As the planet’s garrison prepares for war, Dantioch must choose between loyalty to his legion or to the Emperor.

Review: I love an Iron Warriors tale, so what's the best way to improve on that? Well, it's by having them as attackers and Defenders! We dive head first into the siege of Schadenhold, home to the a garrison of Iron Warriors who upon being given the choice of joining the traitors or joining the Emperor, choose the Emperor. This book had some truly exciting characters in it and made me wish that some of them would survive. Favourite tale in the book.

Review: Dark Angels are one of my favourite chapters closely followed by the Night Lords so to see them both in the same novel is exciting! Haunter has issued a challenge to the Lion and now meet on an isolated world to discuss the war and finally face each other. But they are not alone and both are accompanied by two guards, whos view points form the bases of the story. It is great to learn more about the Nightlords as we have let to really see them, and to have them beating some Dark Angels is amazing to read - Sevetar is just a pure ruthless killer with no honour and I love it. 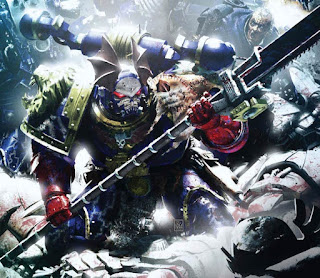 A great ending to a hugely enjoyable book. As always drop me a comment I would love to know if you have these and what your thoughts are on them.
Posted by Adventures with Peps at September 18, 2020