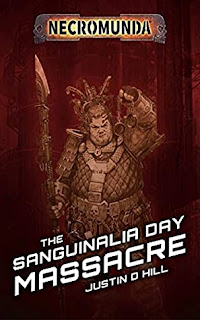 Welcome to book 100, wow never thought I would complete that many book reviews on here but surprisingly I have! I wanted to do epic story for this review you know something like Lord of Rings or Dune but it turns out I just forgot what number I was on and instead I am now reviewing a 41 page Black Library Xmas Advent calendar story. Written by Justin D. Hill, I have high hopes as I really enjoyed Terminal Overkill. Let us dive in.

Commercial Fluff: Every warrior has a story. For Thrax, who fights in the underhive death-pits, it is a tale of hardship, tragedy and murder. Discover it now…

Experience a story told in an unusual way, as you'll learn the truth of Thrax's life and situation across a series of vignettes.

Life is hard in Necromunda's underhive. Is it any wonder that the blood-soaked spectacle of the pit fights is so popular? For Pitboss Barras, it's his living – and a good one. So when Thrax, a convicted murderer and Orlock ganger who killed his own parents, becomes available to add to his fights, he seizes it. But there's more to Thrax's story than meets the eye, and it will culminate in the arena as he faces Barras' star attractions…

41 pages isn't long to tell a tale in. But Justin D. Hill takes a damn good stab at it. Let's not mess around and point out the obvious, it's Spartacus set on Necromunda and given a scifi twist. We follow Thrax an ex-Orlock ganger, following the murder of his own parents he is sold to the fighting pits. Here against the odds Thrax rises in status and is soon leading a rebellion. Sounds good, right? It's actually a surprisingly good tale and deserved more pages, we are rapidly moved through the tale in episodes which quickly set the motive of the main character, before launching us into the pits. Lots of action happens, that is told in a gore filled quick pace and the characters though interesting are never full realised (which is a shame). But we are treated to a great showcase of how brutal, scary and dangerous Necromunda can be. It once again showcases why I need to buy some Goliath models soon.

Highly recommend for fans of Necromunda, take a hour and have a read.

Posted by Adventures with Peps at September 25, 2020