The time has come to start the end of summer fridge clean up and to try to get through some of these stouts that have been kicking around for way too long. Starting with this Bellwoods Skeleton Key. 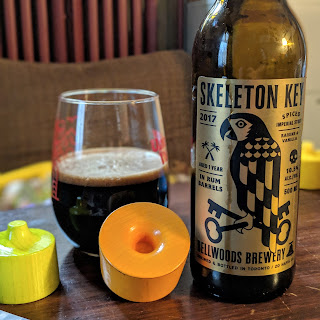 Commercial Fluff - Released annually, Skeleton Key is our rum barrel-aged imperial stout, spiced with a mélange of ginger, all spice, black pepper, cardamom, cinnamon, star anise, nutmeg, juniper berries, vanilla, and caramelized raisins. Because we do our best to be multi-faceted (in life, and in brewing) we upped the ante with this 2017 version and pulled off enough beer on blending day to make 2 additional variants.

The OG is a velvety, warming, and lethally delicious stout that’ll induce sharp pangs of nostalgia long after your last bottle is empty. The lively elements of spice are balanced by the richness of the roasted malts, creating a delicious balance.

Beautiful looking bottle, I know a gold label doesn't change much but it just seems that little bit more special. The stout during the pour is a super dark chocolate brown and forms a pretty good mocha coloured head. The head does ultimately settle down to a fingerish in height but hangs on for the whole brew.

Sticking my nose in I get all the spices! Great hits of ginger and nutmeg for sure. As it warms the spicy aroma continues to develop with cinnamon and a peppery nose tickle. Once your nose is adjusted the classic chocolate notes of the malt start appearing, it's a tasty smelling beer for sure.

The first sip is an assault on the tastebuds as all the spices fight for a dominant position in the tasting lineup. Reminds me a lot of an over-spiced pumpkin beer/pie (perfect for the season). Towards the finish, the molasses, caramel and rum start to push through and add a boozy warmth to the drinking experience. But ultimately this is drinking very spice forwards and the lingering flavour is cinnamon and ginger. Great beer and well worth the purchase. May have to pick up more soon.

Posted by Adventures with Peps at September 16, 2020