Following on from Leman Russ last week comes Perturabo: Hammer of Olympia. At only 208 pages this feels like a short story. Personally going into this book I have a love-hate fear of reading it. I love the idea as I was a big Iron Warriors fan back in 2nd Edition 40,000 and amassed a large enough army to cause terrible, but I also hate it as so far Perturabo is a rubbish Primarch in stories. He is always a winy character with a chip on his shoulder and I find that annoying. So I will attempt to read with an open mind and hope for the best. Here are the book stats. 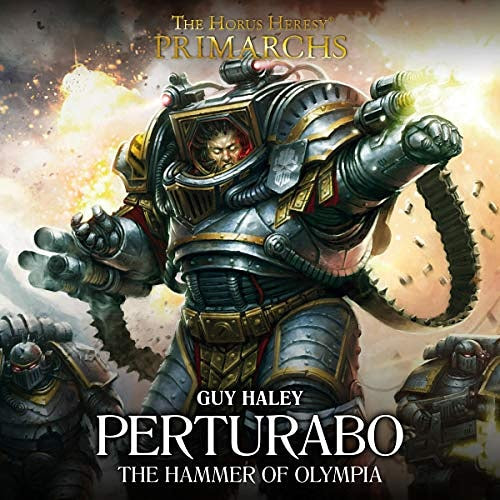 Commercial Fluff: While crusading to build the Imperium, Perturabo, mercurial primarch of the Iron Warriors, hears of turmoil on the world where he was raised, and abandons the crusade to return home and save his people.
Born to a life of political conflict, Perturabo was always considered a child prodigy among the people of Olympia – indeed, his philosophical and scientific works were beyond compare. But then, after his rediscovery by the Emperor and decades of thankless military campaigning on the Great Crusade, the primarch begins to resent his Legion’s place in the Imperium. When word reaches him of turmoil in his adoptive homeworld, he orders the Iron Warriors to abandon their campaign against the alien hrud and crush this emerging rebellion by any means necessary...
Focusing on Perturabo during his youth on Olympia, in the Great Crusade and upon his return to the world that defined him, this is a definitive look at what makes the master of iron tick.
Review
Well, this was a solid book. From the offset, you could tell this was technically two tales wrapped in one with a pretty iron bow. It was a great back and forth story, with one half set in his past seeing how the Primarch matured on his adoptive world (first time seeing this), and how nurture over nature moulded the young mind and corrupted it with paranoia. Whilst, the second half is the man the Primarch has become - a man constantly seeking the love of an uncaring father whilst being cold and uncaring to his own "sons".
This book truly felt about a primarch he didn't share page space with any others and we got a real insight into young Pertuabo's past. A solid read and though not as exciting as Magnus, it's better than Leman Russ and the Guilliman books.
Next read is Deadworld by 2000 AD and I am stepping back from 30k for a book to refresh the mind. Before diving into Book 16 of the Horus Heresy.
Posted by Adventures with Peps at August 28, 2020