Coming off a low in this series due to issue 19, falling a bit flat. I know the series is coming to an end and I am worried the stories and artwork are starting to slide as the company started to not care as much as it did. The cover to issue 20 is bold, bright and though well-drawn looks like something a very younger me would have drawn. The alien creature makes no real sense and I truly hope this is not how the creature will look inside the magazine...fingers crossed. 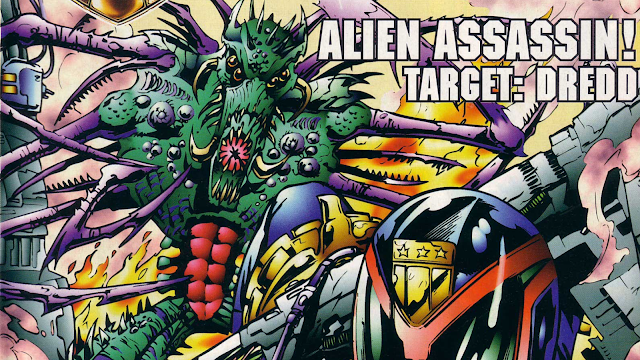 As always we are treated to three tales of adventure. The first is all new and titled Hotdog Run - traditionally the name given to the rookie training out in the Cursed Earth so this is exciting. Then we have Part 3 of First Strike which I feel involves the alien off the cover and final Medusa Part 2, this tale was interesting but the artwork was left wanting I really hope I can ignore the artwork and just enjoy the story.

Judge Dredd is teaming up with his old tutor Judge Cain to lead a Hotdog run of Cadets into the Cursed Earth. Their mission to recover the survivors of a transport crash, who have been taken prisoner by a local mutie slaver force. This mission will prove the worth of the cadets, failure here means the end of their training. This is a fun story and interested to see where it goes. I have a feeling Judge Cain may cause trouble for Dredd, I also find it weird that he looks like Texas Judge Cain from 2000 AD Preacher series and I wonder if he was added as a nod to the series? 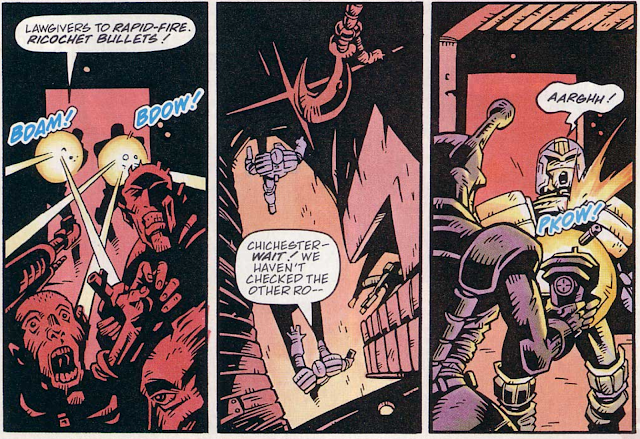 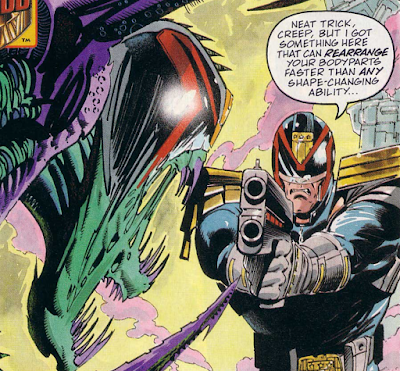 Judge Dredd gets his arse handed to him by the doppelganger alien, whilst they are fighting though Dredd discovers a weakness - Electricity. Shocking the creature and causing it to melt Dredd reports the bad news to the Chief Judge; somewhere out in the darkness of space an alien fleet is poised to attack MC-1 and now they have all the city's defence files. Got to be honest a bit of a filler story piece but it would seem we are getting a part 4 next week so hopefully the action picks up again.
Medusa (Part 2)
Urgh. This story sucks and flopped hard. Following being bitten by Medusa Judge Shiva becomes a host for Medusa and escapes to a local Munce factory where it turns out she has laid some eggs. As the eggs hatch, Vishnu plays some random horn to subdue the snakes allowing Dredd to face and kill the Medusa. I'm sorry but this is just a shockingly bad tale, truly terrible.
Overall a disappointing comic, don't really have much more to say. Hotdog run was the best story but was lacking in the artwork. First Strike had great artwork but lacked a well-thought-out story and Medusa was cringe-worthy storytelling with painful artwork. I'm looking forward to moving past these comics and getting back to true 2000 AD pieces once more.
Posted by Adventures with Peps at August 24, 2020