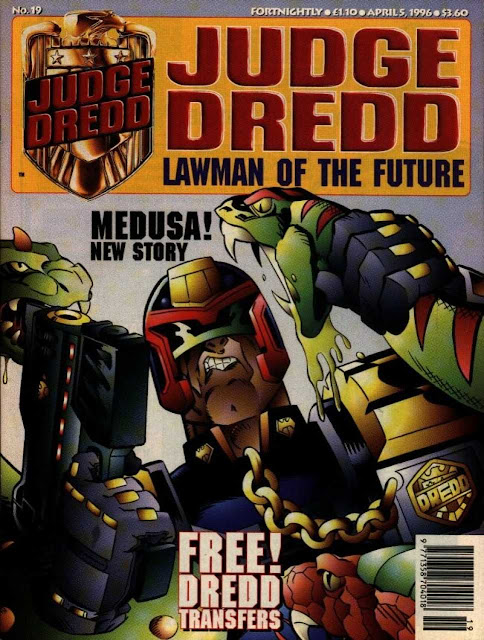 It's sad to think this is issue 19, knowing that only 23 issues make up the set it is sad to know we are nearing the end. So many questions remain unanswered and with the issue count in decline, I fear some questions will remain unanswered. The cover of this issue is rather a cartoon example of how bad the artwork can be with this series. It has Judge Dredd the main man fighting off a trio of snakes and not much else. The text grab is lazy, stating Medusa - New Story...wow has the design team already left? I hope the inside stories improve on this poor opening. 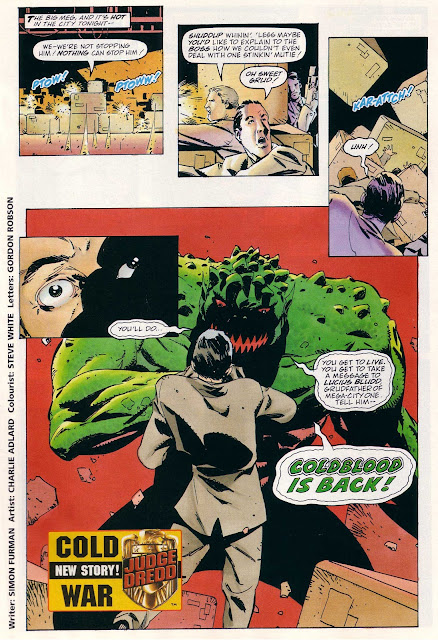 Cold War! - Finally, Coldblood is back and he is taking on Bludd! Judge Dredd knowing who the true target of Coldblood rage is, travels to Bludd's space station. Unknowingly taking Coldblood with him. In true Judge Dredd form our lawman of the future steps in and stops Coldblood by blasting him into deep space and ensuring Bludd's survival. This story really suffered from the speed of the storytelling. There was no build-up, no tension, no payoff. Really disappointing.

First Strike! (Part two) - A shapeshifting alien has managed to destroy a MC-1 Space Station and has fled to earth. It is now down to Judge Dredd to track down the infiltrator, first, stop Alientown! But whilst Judge Dredd is distracted the shapeshifter dons Dredd's form and storms into the Halls of Justice, gunning down multiple Judges before overrunning Tec-Division.

A better tale than cold war and I am finding myself intrigued as to where it is going. Guess I have to wait for part three. 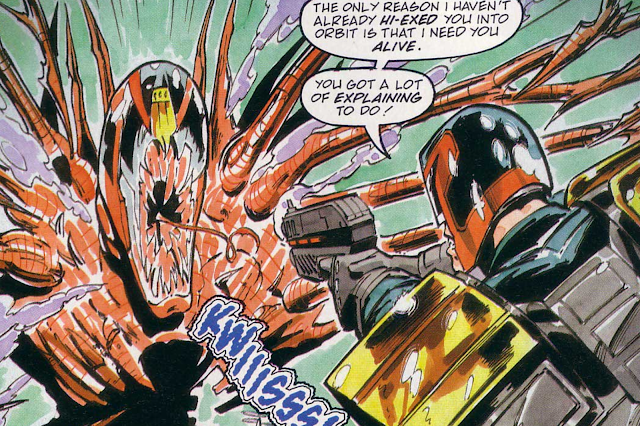 Medusa - A weird tale this one, during a routine night Judge Dredd saves a woman from being killed a cutlass wielding madman. With the attacker in custody, Dredd allows the women to leave but places a tail on her as he is always suspicious. Following interrogation, the truth is relieved and Dredd realizes he has allowed a Medusa to walk free into the night skyline of MC-1!

A weird tale but I like it. I love the fact we get a mention of Indo-cit (the Mega-City of India) and I am excited to see how this one goes. One thing I must say is that I am not a fan of the artwork. 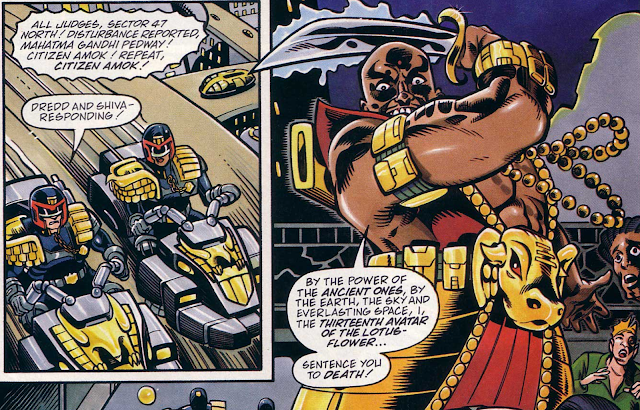 Overall a meh issue. It had some high points like Coldblood was back, but it all feels incredibly rushed and I feel a little cheated. I really hope Coldblood survives and comes back, but I don't have hope with only four issues left in the series.