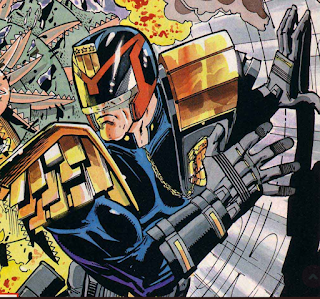 This is going to be a tough issue to get through. In my personal opinion Issue, 16 was the strongest issue to date. With that being said we have this new issue and two new stories inside. The cover picks up from how the Cybernetic Jungle finished in the last issue, with Judge Dredd facing off against a deadly drilling machine. A pretty well-drawn piece but it is a chaotic cover once you cover it in font and titles.
The stories included in this issue are Cybernetic Jungle (Part 3), The Cursed Earth and Wish you were here. I know Cybernetic Jungle should be good but I am really intrigued by the Cursed Earth story. Let's dive on in.
Story - The Cursed Earth (Part 1)
The story begins at Complex Alpha a Mining Colony located in the radiated wastelands of the Cursed Earth. The colony has disturbed something in the hills they are mining and now that creature wants revenge! Having managed to get a distress beacon off, colonists huddle together in the most secure building they can find. Back in Mega-City One, the Judges decide to send a search party to investigate what is going on, Judge Dredd volunteers himself and his one-time partner Judge D'Angelo (who is still on report from her previous Judge Dredd assignment). Soon they are at the colony facing off against a Gila-Munja mother who has lost her children to the mining equipment, now the real question is how are they going to survive?

Story - Cybernetic Jungle (Part 3)
I love these three-part stories, it actually gives the writers a chance to make a real story. We start this part with Judge Dredd and Cyber facing down a giant drilling machine controlled by the ruthless Sharpnel. Judge Dredd distracts the giant machine and Sharpnel long enough to allow Cyber and his droids to escape the Jungle. Outgunned and almost out of ammo Judge Dredd destroys a local water processing plant flooding the tunnels, allowing Cyber to electrify the water destroying the drilling equipment and killing the Sharpnel in the process. With the Cybernetic Jungle saved Judge Dredd returns to Mega-City One to continue his war on crime.
A solid ending to the tale, I find it weird that Cyber went back into the Cybernetic Jungle though, but I guess that is an easy way to write him of the series.

Story - Wish you were here 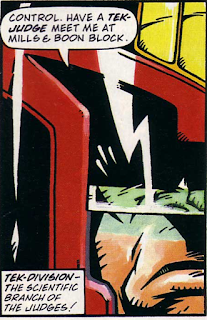 Breaking news! Judge Dredd has married the famous Swimwear model Pamela Sanders. Soon the news is spreading across MC-1, the only problem is it never happened. With Judge Dredd on the case and tracking down where the footage has come from, it doesn't take long to find a lead. This lead takes Judge Dredd across MC-1 tracking down an illegal wirehead group who are playing a dangerously addictive game called "Get a Life". Here people live out a fake life at the expense of their own. Judge Dredd teams up with Tek Judge Davis and soon they are shutting down the legal operation.
Not a really memorial tale, it fills a little flat compared to the other stories in the magazine, but still a good tale. They really should have started the issue with this tale and maybe it would have come across stronger. This just seems little a bad editors job.
And with that, we have reached an end of another issue. Not a bad issue two solid stories and a pretty good third story. The Cursed Earth tale is a great monster hunt story and will be fun to discover how it finishes. The Cybernetic Jungle ended strong whilst Wish you were here was a great inside scope into the world of MC-1.
As always thanks for stopping by.
Posted by Adventures with Peps at August 04, 2020