The time has come the Walrus said to talk of many things...
With this post, we will have completed the Lawman of the Future 1990s failed comic series. I want to scream about the injustice of ending the series, I want to pour positive thoughts into the world about how if given a chance could have been an amazing series. Sadly I can't it is a bit of a dead duck. Of course, there are positives but overall this was a subpar comic at best and pure garbage at worst. Let's now take ourselves for one last dive into the series.
Okay not a great start, the cover suffers from the same start as issue 22. Weak ass cover artwork. Judge Dredd is poorly rendered in a paint app, fighting one-dimensional alien forces. The colouring is lazy and it just fills me the feeling of meh. Plus side is the caption - "The Final Conflict" mentally preparing for the news inside. 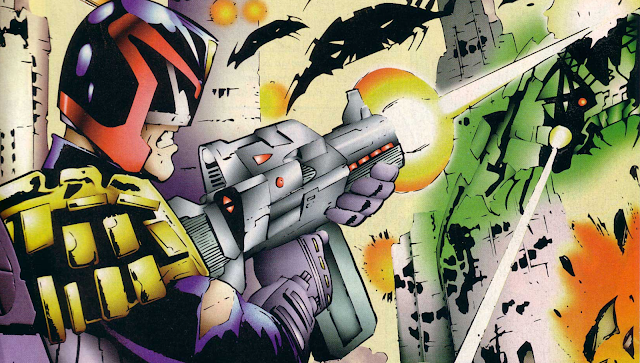 Boom. Drop the mic. A single paragraph stating the news this is it. No heartfelt piece about the comic or why it is ending, just a straight-up "peace out and buy 2000 AD", it's a real cop-out and a little disappointing. Once again like issue 22, we only get two tales once more Invasion (part 3) and The Badlander. I really hope they tidy up plot threads and don't just rush something but time will tell.

The city and the Judges have been taken unaware and now the alien warhost lays siege to MC-1, carpet bombing the city with impunity. The council of five now faces a tough choice, die fighting or surrender. Following the vote, the table of senior Judges is spilt leaving it to the Chief Judge to make the decision. With a subtle manipulation from the Shapeshifter Judge Hershey, Chief Judge votes to surrender. Just as the call is about to be made Judge Dredd rushes in and kills the double Hershey. With one mole down Dredd makes the hard choice to discover who the other mole is (no spoilers). After uncovering the other traitor, Judge Dredd is able to purge the computer system of the virus and regain anti-war batteries, opening up on the fleet above MC-1 utterly devastating them.
A solid finally tale, the last panel was nice. It has an injured Judge Dredd refusing treatment as he has a city to help rebuild. Not sure this is the opener I personally would hope for in the final issue, but glad to see a good wrap up. 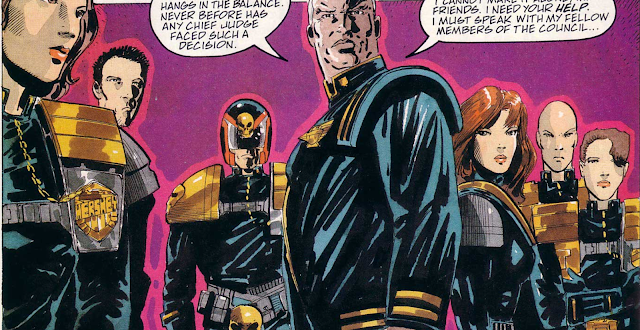 What happens to a Judge that takes the Long Walk and survives too long? That is the theme of this tale. Following a mutie hunt by the rich and powerful of MC-1, alone Cursed Earth survivor has come seeking justice in the city he once tried to protect. Managing to stay just one step ahead of Dredd, the Badlander manages to claim every head but one - Millar.
As the Badlander attempts to get the final perp, Judge Dredd finally arrives on the scene and we get a classic 90s fight scene resulting in the Villian plunging to his death from a tower block. With Millar dead and no body found of the Badlander Judge Dredd has to assume the Bodyhunter escaped into the Cursed Earth once more. 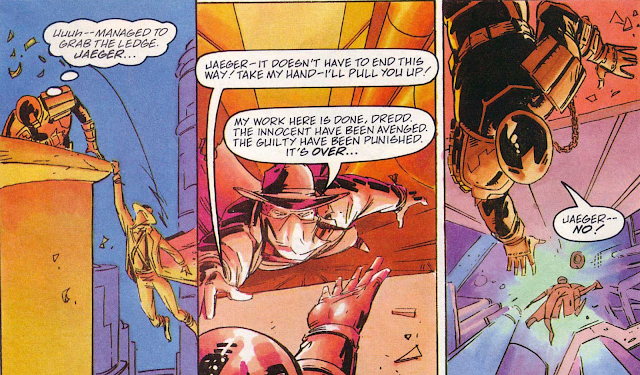 A great story let down by poor artwork in my opinion. Great piece though, if a little strange to end the entire series on this tale. But end it must. It was nice to go back down memory lane and rediscover this classic piece of enjoyment, even if it didn't age well. I hope you enjoyed it too and I think I will personally return back to the Case Files once more.
Thanks for reading.
Posted by Adventures with Peps at August 29, 2020