I can't help but just power through these and get them done. This series was never going to win awards but damn did the quality die as it was failing. The cover this time is by far the worst! 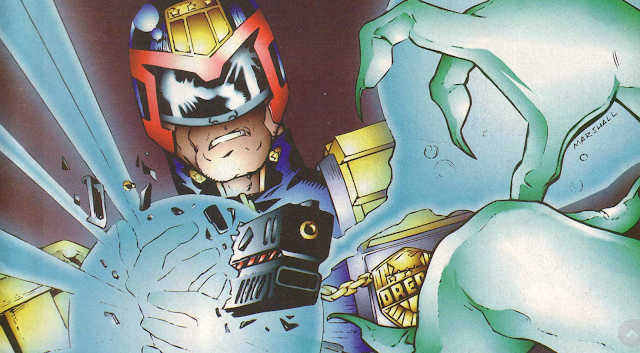 It looks like I drew it! It's just disappointing to see that even the staff had given by this point. The title page even has the cheesetastic line: Dredd Zapped! wow, couldn't even be bothered to write something a bit more fun?

Inside it gets worst, gone are the three tales of Dreddy adventure, instead replaced by two tales the first Warlock a 12-page epic and then Invasion (Part 2) made up of 10 pages. It's nice to see a format change but realistically this screams more of trying to tie up stories in time for the final issue. But maybe that is the pessimist in me coming out to play. 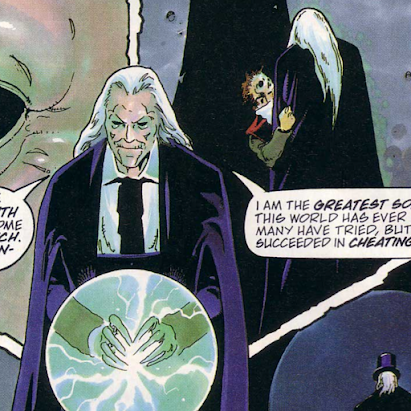 A serial killer is loose in sector 77 with six deaths under their belts it is up to Judges Dredd and Hershey to discover who is sucking the life out of MC-1 citizens. Soon the trail leads them to a businessman with a weird taste in wardrobe attire. Turns out this old kook is was the seventh son of a seventh son and is, in fact, a Warlock born way back in 1690. Every 70 years he is forced to kill seven people to be able to process the seventh victim and live for another 70 years. Looks like Judge Dredd is lucky number seven this time.
An okay story, this should have been a Judge Anderson tale in truth but has great artwork and good pace about it, just a shame it took up half the magazine.

The shapechanging alien horde has come to claim MC-1 as their own. Having failed to stop their spy within the ranks of the Justice Department, the Judges are being overrun by computer virus and system failures. With all force mobilized even the cadets are working which turns out to be a blessing as Cadet Paxton has discovered the truth! Now it is up to Dredd to save the day but it seems even he can't take a bullet to the chest. What is happening in this story? Guess I have to wait for the final issue and part three.

Overall an above-average issue. The artwork is the main saving grace especially for the warlock, I just wish the cover artwork was better it is so lazy it put a sour note in my mind which I am sure affected the other tales. Only one issue left!
Posted by Adventures with Peps at August 27, 2020