I am pushing through strong to get these issues finished this week. I hope you don't mind I am just tired of the direction the comic has gone and I can see why it failed. 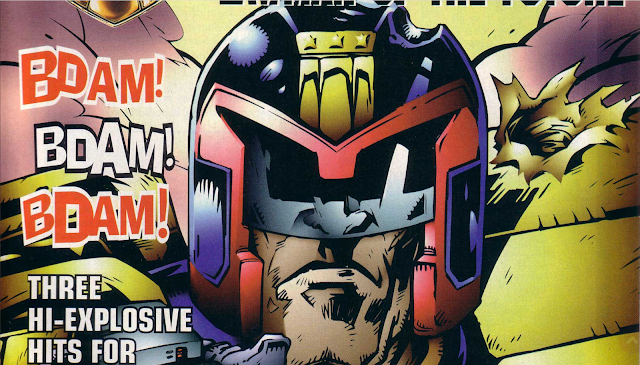 Hmmm, weird image choice for the cover, showing a batted Judge Dredd whos been slightly shot up. It's not a badly drawn piece at all, but I just don't like it as a cover piece. It fills the page too much and lacks motion and areas of focus, it's just all a bit bland. Something this comic has been struggling with of late. Inside we discover unsurprisingly that we three tales, Hotdog Run (Part 2), Invasion and Road Rage. I'm not sure how I feel going into this issue as the last one didn't really fill me with hope, but let us see and I hope you enjoy my brutal commentary.

So we pick up the adventure with three rookie Judges captured by mutie slavers and awaiting auction. But this is actually all a plan by Judge Dredd to ambush the slavers from inside their own encampment. Severely outnumbers the Judges training soon kicks and the Judges are able to free the prisoners, but sadly it would seem for one Rookie the training didn't stick and as he disobeys Dredd's command he is blown to pieces by the muties. Following the completion of the mission, Dredd passes the three Rookies, but he also passes judgement on Judge Tutor Cain. Fearing his career to be waning Judge Cain elects to take the long walk and bring law to the lawless.
Great ending to the story, still unimpressed with the artwork but definitely enjoyed the storytelling. I still find it weird that they lifted Cain from Texas city and planted him in this tale. 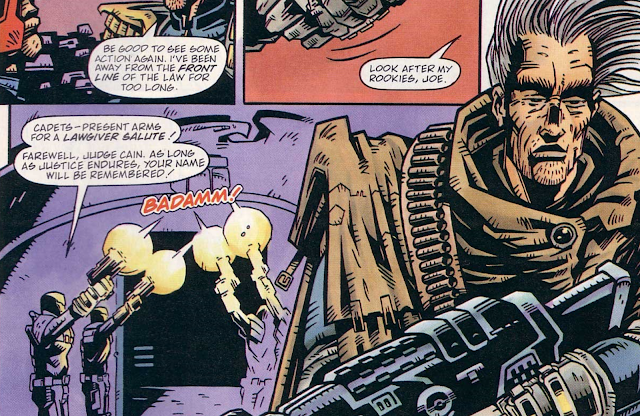 Invasion (Part 1)
This tale follows on from First Strike as the Shape-Changing aliens finally begin their assault on MC-1. Something is wrong with the main computer system, a virus of sorts is spreading through and overriding safety protocols. What starts as multiple car crashes slow builds up to mass escapes from ISO-Cubes. This is all seeming coordinated by an alien who has masked himself as a high ranking Tek Judge.
A solid tale with good enough artwork though it does look a bit dated if I am honest. This arc of stories is actually getting interesting finally and I hope it continues on this path. 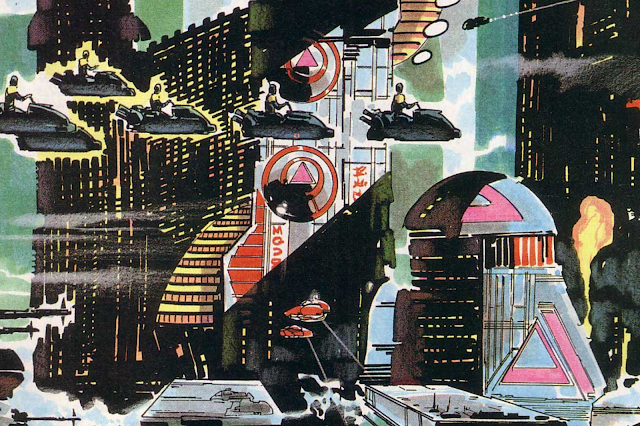 Road Rage
Looks like Mad Max is head to MC-1. We have a few Mel Gibson themed parts to this tale, that ultimately involves a perp going crazy on the Mega-Way and starts destroying vehicles left and right. Soon Dredd is on the case and quickly catches up. After a single page of action, the story is done with the perps arrested. This was dull! Such a bad way to end this issue and to make matters worse the artwork sucked. It's so bad I am not even showing a piece. Disappointing ending.
As always drop me a comment and let me know your thoughts. Only two issues left!
Posted by Adventures with Peps at August 25, 2020