I'm sticking with the Heresy theme but jumping into the Primarch series with Leman Russ: The Great Wolf. I know this is going to be a hard tale as I struggle with the whole idea of Space Vikings and Werewolves, but it's only 176 pages so hopefully, I will zip through this. So grab an axe, get the flea powder and let us dive in. 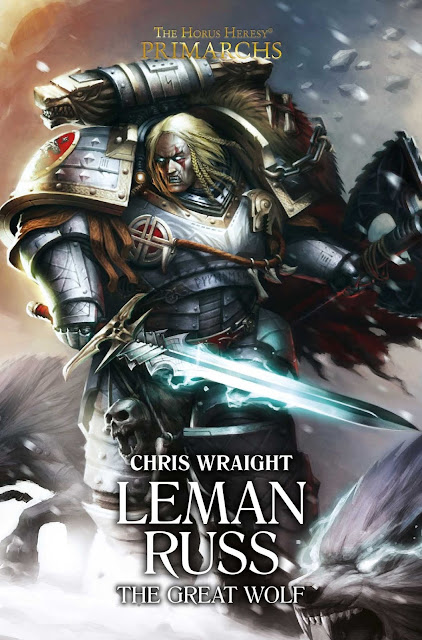 Commercial Fluff: At the height of the Great Crusade, Leman Russ and his Dark Angel brother, Lion El'Jonson, come into conflict as they pacify the world of Dulan.
Many are the sagas of Leman Russ, Lord of Winter and War, most fearsome of the Emperor’s primarch sons. At the height of the Great Crusade, his Space Wolves fight to bring the rebel world of Dulan to compliance. Enraged by the defiance of the tyrant Durath, Russ has pledged to strike him down personally – but his brother Lion El’Jonson of the Dark Angels advises more caution. With the might of two Legions arrayed against Durath, tensions nevertheless run high, and the rivalry between the Wolf and the Lion threatens to engulf them all.
It's one of the definitive events from Warhammer 40,000 lore, the origins of the ten-millennium-long enmity between the Space Wolves and the Dark Angels. It's a tale that fans have been waiting to read for decades… and now you can.
Review
Okay, the story wasn't too bad which is a bonus but it also didn't really focus on Leman Russ either? This is a shame as it is a Primarch series focusing on Russ. I found it focusing more on his captains and the Dark Angels which is good for me as I am a big Dark Angels fan, but that really isn't the point of this book. The actions scenes were fast-paced but also felt rushed, I felt the book really could have used an extra one hundred pages and then I would be writing a more positive review. The true highlight of the book happens in the last third as Russ and the Lion finally clash, a great scene that in the lore is still re-enacted - we even get an epilogue showcasing this which was a nice touch. But I just can't forgive the overshadowing of the main character and is so far the weakest story in this series, which is a disappointing turn of events for such a popular legion.
Up next is Perturabo which I hope will turn it around with a good tale, I actually collected Iron Warriors in 2nd and 3rd Edition 40k (got to love hazard stripes), so I have high hopes for it.
Posted by Adventures with Peps at August 21, 2020