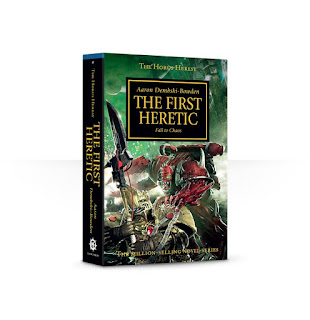 Hot on the heels of Nemesis and that failed assassination plot comes First Heretic a return to the series for the Word Bearers and a truthful telling of their role before the beginning of the Heresy. I read this title when it first came out as I was and still am a big fan of the Word Bearers and I was excited to be diving back into this tale.
Book Details
Title: The First Heretic - Horus Heresy Book 14
Author: Aaron Dembski-Bowden
Publisher: Black Library
Type: Mass Paperback
Page Count: 502
Commercial Fluff: midst the galaxy-wide war of the Great Crusade, the Emperor castigates the Word Bearers for their worship. Distraught at this judgement, Lorgar and his Legion seek another path while devastating world after world, venting their fury and fervour on the battlefield. Their search for a new purpose leads them to the edge of the material universe, where they meet ancient forces far more powerful than they could have imagined. Having set out to illuminate the Imperium, the corruption of Chaos takes hold and their path to damnation begins. Unbeknownst to the Word Bearers, their quest for truth contains the very roots of heresy.
Review
It's an Aaron Dembski-Bowden novel so we know it is going to be good and it doesn't disappoint. This book is all about the Word Bearers' quest for knowledge and for great answers to the Galaxy and to answer the ultimate question "Do Gods Exist?".
The novel starts off with the Ultramarines purging Monarchia the perfect city, a place created by Word Bearers to worship the Emperor. But ultimately when discovered the Emperor demands it's destruction by the hands of the Ultramarines. When the Word Bearers arrive they are forced to kneel in penance and watch as the city was bombarded out of existence. The Emperor then reprimands Lorgar, causing cracks to form in Lorgar's beliefs and setting the steps in motion for the story to begin.
Feeling betrayal, jealously and shame, Lorgar reemerges from isolation a changed Primarch and starts burning a path through the stars claiming world after world and making many believe he had changed his ways. Soon his arch of the Crusade is further out than any other and discovers the warp rift that would soon be known as the Eye of Terror, and makes contact with a sinister cult on a planet called Cadia. Here they take part in a blood sacrifice and gain a guide to lead them into the warp. Lorgar fearing the eyes of the Imperium on him trusts this first pilgrimage to a subordinate and sends them into the eye to discover the truth.
The truth or some form of it, is discovered and fate is set, soon the galaxy will burn and though many will believe Horus to be the first to fall, the truth is the Word Bearers had always been heretics.
This was a great story with some really special insights to Lorgar and why he chose his actions. Lorgar for me is the most relatable of the Primarchs, he is pretty much average in every way possible when compared to his brothers. But it is this middle of road skill set, that makes him so special, he is a true leader to his men and when around his brothers he is able to blend into the background and manipulate from the sidelines allowing his loud brothers to distract attention from him. He is the voice behind the throne telling sweet lies and truths in equal measure to set the road to damnation and now he has true Gods to follow. Such a classic villain if there ever was one. This has reinvigorated my drive for 30k again so expect more book reviews soon. 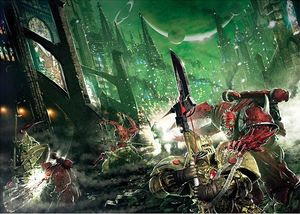