It's been nice taking a break from Space Marines but it is time to leave the Xenomorphs for a while and head into the 30k universe once more to book 13, Nemesis. I read this tale a long time ago and was excited by this title at the time as assassin stories were very few and far between. 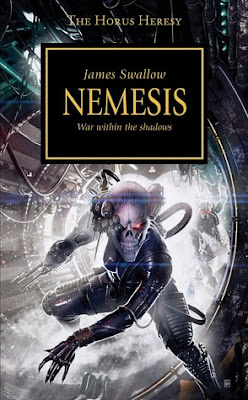 Commercial Fluff: After the horrors of Istvaan V, Horus declares outright war against the Imperium. In the shadows of the Emperor's Palace, powerful figures convene. Their plan is to send a team of assassins to execute the arch-traitor Horus and end the war for the galaxy of mankind before it's even begun. But what they cannot know is that another assassin is abroad already, with his sights firmly set on killing the Emperor.

Review
The last book I read by James Swallow was Flight of the Eisenstein, which was a great book.  This book is what I would classify as a filler piece. In the greater schemes of the Horus Heresy war, this is just a side adventure but what a great side adventure. We have a populous world slowly decaying into rebellion, under the fear of the Warmasters visit. Then to make things worst there seems to be a serial killer loose in the city. Whilst all this is taking place, back in the Imperial Palace the rulers of the Assassin Clans have met to create an Execution Force - Their goal to kill the Warmaster. One operative from each cell will have to work alongside the others if they are to stand any chance of defeating Horus, but where to strike? Luckily they happen to know a world he is visiting soon.
The book is well written and very enjoyable. What we have with this book is two short stories meshed together to create one whole story. Normally this would annoy me, and quite a few Black Library titles have in the past by pulling this stunt, but the cast of characters were few in number and the tales combined so well in the end, just in time for the action to pick up that it felt natural and right. It's ultimately a fun read as we already know the Execution Force will fail, but you just can't stop hoping they will succeed. It also lets us see behind the veil and how a war of shadows and assassins is ultimately hated by the Primarchs on both sides and is then banned in being used during this war moving forwards - Does this stop Malcador or Erebus? I doubt it and I hope we get a bit more shadow wars happening but I believe this is the only assassin adventure in the series which is a shame.
A fun read and I highly recommend it, it doesn't need to be read in order as it is pretty much a stand-alone tale. But with this finished we are now onto a Word Bearer's tale, a legion I have always had a soft spot for.
Thanks for reading drop me a comment.
Posted by Adventures with Peps at August 07, 2020