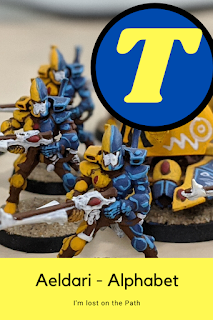 My Eldar Encyclopedia is becoming a bit bloated and over complicated so I am attempting to fix this. Starting with the A-Z of Aeldari words I have over there. Whenever I have the urge I will post a section of that page, create a link to this page and see if it tidies up the page and makes me feel happy once more.
T
"The wind whipping across your face as your blades whip across the throats of the foe. It makes the blood sing" - Hrythar Dreamweave, Wild Rider
Tag: DescendTageth: FallTagtha: DownTain: EnderTaluclu: Meeting
Tann/Tainn/Tonn: SpiritTannascurath: Spirit warriorTava: Right ofTemam/Timam/Tomam: When?
Tera: Left ofTesstrassa: Term given to the 5th day of the week. Note there is only 6 days in the Eldar week.Thara/Tharet/Thareith: Here, Being in this placeTheliol/Thelriann: HoleThelios: AbsenceThelriann: LackThiellan Aq Saim: Coiled Serpent.Thyllian ai-kelethril: Path of Shards.Tial: Far fromTill: SlayerTir: ThreeTirtu: ThirdTiusich/Tuisach/Tuisich: Honouring
Toill: ButcherTokath: ScorpionTonesh: BlueTorev: BrownTossirial: StreamTossirian: RiversTosthuich: LakeTri: SabreTrill: BladeTuelean: Shuriken Catapult.Tuisich-Novasmair: Lord-Pheonix or Phoenix LordsTurfen: in opposition toTurt: FacingTurta: Opposite
Original Materials
This is a project that has been worked on for a while and mainly for my own needs so I never thought of recording page numbers etc. as I never thought it would leave my notebook but for those interested, it has been collected from the following locations:
Rogue Trader (1987), Warhammer 2nd/3rd/4th/5th Editions, Eldar codex (2nd ed/3rd ed/4th ed), Codex Dark Eldar, Citadel Journal #17, White Dwarf #127 (original Eldar army list), Codex: Titanicus, Codex Necrons, Warhammer 40,000 compendium, Warhammer 40k Wargear (2nd ed). Battletome Sylvaneth. Battletome Daughters of Khaine. Battletome Idoneth Deepkin.
Black Library Novels: Shadow Point, Harlequin, Chaos Child, Farseer, Tales from the Dark Millennium, Warrior Coven, Path of the Warrior, Path of the Seer, Eldar Prophecy, Valedor, Asurmen, Jain Zar, Rise of Ynnead: Ghost Warrior, Rise of Ynnead: Wildrider.
**Also there is this web version of an Eldar dictionary that turns out has been around since 1990. It's more complete than what I have collected and better organized. This link was requested to be added by David Grophland: Eldar Language
Posted by Adventures with Peps at August 09, 2020