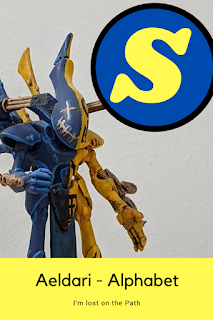 My Eldar Encyclopedia is becoming a bit bloated and over complicated so I am attempting to fix this. Starting with the A-Z of Aeldari words I have over there. Whenever I have the urge I will post a section of that page, create a link to this page and see if it tidies up the page and makes me feel happy once more.
S
"Since the time of The Fall, our race has been haunted by what we, in our reckless pursuit of hedonistic indulgence, gave birth to. Though our dreams once overturned worlds and quenched suns, we are now but fitful shadows clinging to the edge of existence. All the stars in the sky cannot blot out the hateful glare of the Red Moon's Eye. The birthing place of The Great Enemy pulses with all the malice of a daemon that is dreaming, casting its shadow over all we have ever done and all we ever shall. Every twisted strand of Fate and casting of the Runes leads me to this time, to this place, and it is clear that the final battle awaits me at the ancient Crone Worlds. A conflict the likes of which has not been seen since the Mon-keigh warred amongst themselves, and their corpse of a seer fell to his traitorous son, is coming and all my steps lead towards it, no matter that I walk other paths. I see the stars stained red with the blood of the Mon-Keigh and, though their wars do not concern me and I would gladly let them destroy one another, I know that to avoid this fight is to condemn my race to inevitable doom. And though all I see is darkness, I know that I will not flinch from my destiny" - Eldrad Ulthran
Saedath: Strategic Battle Plan.Saim: This word has two meanings, 'snake' and 'secret knowledge.'Scuraith/Scurath: Walking
Scurathainn: WalkersSeach-: Requires a prefix a the end but on its own means 'deception.'Seachmall: The Eldar word of 'illusion', which deals is often used in conjunction with the Harlequins.Seachran: Similar to Seachmall in that the two words mean similar things, but Seachran literally means 'delusion.'Seira/Siar: Dispersed
sema: Turned away fromSercam: WebSercamarith: Web of SkullsSercamBelach: WebwayShad: SpearShai'naid - the Endless Winding Serpent (Hive Fleet Naga)Sha'eil: HellShelwe: Song.Shem: TearsSheman: MourningShemas: TearsShemash: WorldShenestra: DamnationShiasta: HistorySial: Near
Sier: Scattered​​Sierann: Exodite Dragon KnightsSierbann: Scatter LaserSin*: That which is givenSindra: Term given to the 3rd day of the week. Note there is only 6 days in the Eldar week.Siolka: RedemptionSista: PastSistau: WisdomSlaan: SlaanSlidd: StarsSoek*: While/at the same time as/alsoSoemIsh-soam: Weapons PlatformSol: OneSolerant*: About to happenStarwalk: To take your own life.Subarn: ConstructedSubast: ArtificialSubeliast: ContributionSubest: CreatedSubhar: ComputerSuda: Something/WhateverSuin: WailingSuin Daellae: Wailing doom i.e. the Avatars weapon.Suin Daellea: The doom that wails​​
SuinMure: Howling BansheesSuith: DanceSuitheakion-Eliath: The Dance Without EndSuithimarith: The Dance of SkullsSun: SixSunwings: Dragonflies, darts of yellow.Surathin: DiceSurhan: Mythical Swordmaster.
Original Materials
This is a project that has been worked on for a while and mainly for my own needs so I never thought of recording page numbers etc. as I never thought it would leave my notebook but for those interested, it has been collected from the following locations:
Rogue Trader (1987), Warhammer 2nd/3rd/4th/5th Editions, Eldar codex (2nd ed/3rd ed/4th ed), Codex Dark Eldar, Citadel Journal #17, White Dwarf #127 (original Eldar army list), Codex: Titanicus, Codex Necrons, Warhammer 40,000 compendium, Warhammer 40k Wargear (2nd ed). Battletome Sylvaneth. Battletome Daughters of Khaine. Battletome Idoneth Deepkin.
Black Library Novels: Shadow Point, Harlequin, Chaos Child, Farseer, Tales from the Dark Millennium, Warrior Coven, Path of the Warrior, Path of the Seer, Eldar Prophecy, Valedor, Asurmen, Jain Zar, Rise of Ynnead: Ghost Warrior, Rise of Ynnead: Wildrider.
**Also there is this web version of an Eldar dictionary that turns out has been around since 1990. It's more complete than what I have collected and better organized. This link was requested to be added by David Grophland: Eldar Language
Posted by Adventures with Peps at August 08, 2020