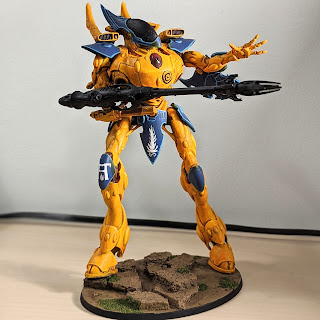 Welcome to a long-overdue Aeldari post! It's been an age since I last posted Aeldari models. Something I hope to improve on in the upcoming weeks. This last week I have been left in a home alone scenario, so I figured I might as well try and finish up some models. The first and easiest model to finish up is this wraithknight, left to collect dust due to high points the base had been sorely lacking a finishing coat of paint. As I attempted to do just that I decided it would be easier just to chop it off the base, get it all painted and reattach.
Like a lot of my models, it is purely tabletop ready only ie. looks good from three feet away. The base is simple but effective and sits well with the rest of the army. So here is my first Super Heavy completely finished:
Oriosamure - Stars Death
Twins are such a rare breed on Iyanden and even rarer in the current age, so when the House of Ulthanash was blessed with Isentara and Madera there was much celebration. The twin sisters were inseparable throughout childhood and it was known to the House Elders that the twins were destined to pilot a Wraithsuit sooner or later. Unfortunately, it was sooner and Isentara died during the Battle of Iyanden in 999.M41 fighting a Nurgle Plaguemarine. Fearing a slowing fading death in mourning Madera volunteered to be inturned into a Wraithknight suit as the Elders had seen so long ago, and with this Oriosamure was born. The Knight soon gained a reputation for risk-taking, fighting on when others would have fled. This has led to the still-living sister being chastised for recklessness but none can deny their kill count with the relic Suncannon.
Traditionally armed with the aforementioned Suncannon, alongside the Scatter shield and Scatter Lasers. The Oriosamure is a true infantry killer and rightly feared when they ride to war. Always the last to leave a battle, House Ulthanash fear they may one day push their fate too far. But for now, the Craftworld rejoices at the slight of twins aboard in the wider conflicts. 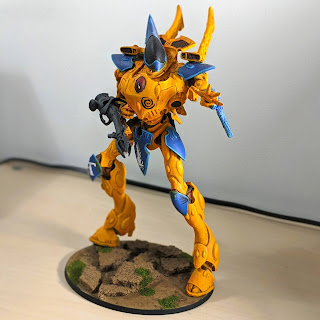 As always let me know your thoughts in the comments and please take a moment to either like or subscribe to this blog. Cheers!
Posted by Adventures with Peps at July 27, 2020