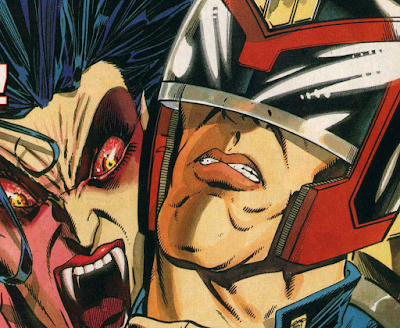 Do we have a horror-themed issue set before us? The cover is dominated by the chin of Judge Dredd (looking very Slystone), with a vampire lunging in over his shoulder to take a bite. There is something about this cover that I really like, it's neither well-drawn nor detailed but it just screams Judge Dredd to me. What are your thoughts?
Like every issue before this comic, we have three stories inside. The all-new one is Thirst - the cover artwork and a vampire heavy tale, we also have Cybernetic Jungle - Part Two - Sharpnel is fast becoming a favourite character for me so I hope they don't kill him! Then we have something a bit rarer a part three, Dragon's Lair is shaping up to be one of the greatest stories in the magazine collection. Let get in and get going.
Story - Thirst
A beautiful entry panel showing the chaotic nature of Mega-City One's Spaceport. A skimmer from Euro-City Two is on autopilot and fails to initiates landing procedures resulting in a dramatic crash. Following an investigation, the med Judges realize that pilots were dead before the crash, but what drained them of all their blood? Soon it becomes obvious that a vampire is loose in Mega-City and Judge Dredd is on its tail, can Dredd stop Midnight in time and how do you stop a vampire?
Great story and I love a good Zoom train chase. 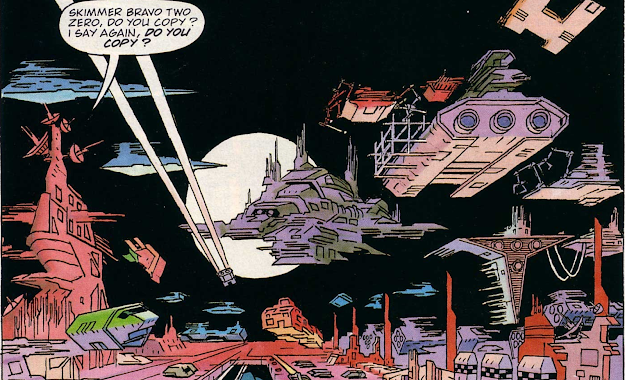 Then we get a weird double-sided poster one side is Mean-Machine from the front and then from his back. It's great to see all the characters real details, but who find the back image of any real interest (well enough to hang it lol).
Story - Cybernetic Jungle (Part Two) 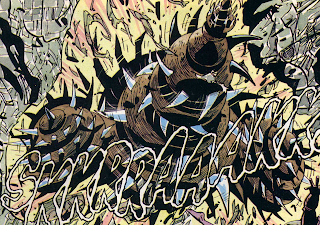 Judge Dredd has tracked down Cyber and following a fistfight, Judge Dredd bests him in combat. Cyber and the robots soon give Judge Dredd reason to believe that the current head of Darwin Corporation - Sharpnel - murdered Cyber's parents and is now attempting to finish the job, in a selfish attempt to remain in power of the massive corporation. With the tide turning it is now that Darwin Corp. Stalker Droids attack hoping to kill both Cyber and Judge Dredd!
Once again we have a rare three-part story! What is going on with this magazine - we are suddenly getting epic stories. The drilling machine looks like it was pulled straight out of the Labyrinth and designed by Jim Henson. Love it!
Story - Dragon's Lair (Part Three) 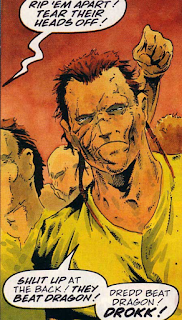 We are back into the good stuff. Judge Dredd is getting his arse handed to him and it looks like Judge Dredd is beaten. That is until Judge Hershey comes blasting through the wall and distracts the monster tattooed assassin. Outnumbered by the prison riot escapees, Judges Dredd and Hershey head to the roof to regroup and here the Dragon strikes once more. Letting loose his tattoos Dragon once again gets the best of Judge Dredd and only with Judge Hershey's aid and a concussion grenade is Judge Dredd able to best the Dragon. After seeing Dragon fall the rioters surrender and walk back to their cells - classic ending to a Judge Dredd case.
Such a great issue. Enjoyed every story and I'm sad to not have the Dragon in the next issue. Let me know your thoughts and drop me a comment below.