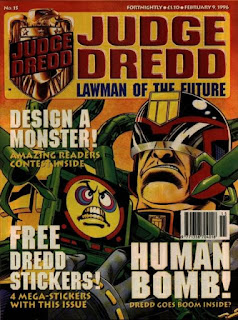 Welcome back Dreddheads. We are swiftly moving on from last week's shapeshifting dinosaurs onto explosive robots. I really feel like the last few issues have given up on showcasing great artwork (horrible thing to say I know), but the cover is so lacklustre and dull. Judge Dredd doesn't even look like Dredd, instead, it could just be some Butterbean headed Judge. I really hope the story it represents is drawn better than the cover! Let us dive and see what is happening in this issue 15 of Judge Dredd Lawman of the Future.
As always three tales grace this issue with two new stories: Bomb Man and Cybernetic Jungle. Cybernetic Jungle I am hoping is the new two-parter as it sounds really interesting. And then we also get the second part of the Dragon's Lair and the Illustrated Dragon tale which was a real highlight in the last issue.
Bomb Man 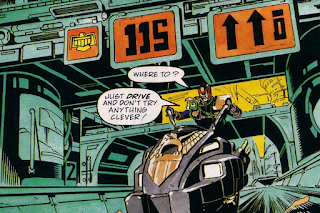 The story starts at AD Tech, the Justice Departments' secret weapons lab. During the nightly clean the janitor discovers something he should have an anti-personal mine with A.I! Soon the bomb has placed itself on the janitor and forces him to commit a crime in the hopes of escaping MC-1. Unfortunately, they pick to rob the diner Judge Dredd eats at.
A bit of a weak tale, very Judge Dredd story arc just a bit weak. Like the fact the A.I states Goodnight Sweet Heart seems forced, why couldn't chat like a normal human instead of some movie gangster? Let's move swiftly on and hope for the best.
As a follow up to this tale we get the criminal record file on Mad Bomb, which seems pointless as his crime spree lasted a single day and resulted in its own destruction. Would have preferred to have seen a different character here. 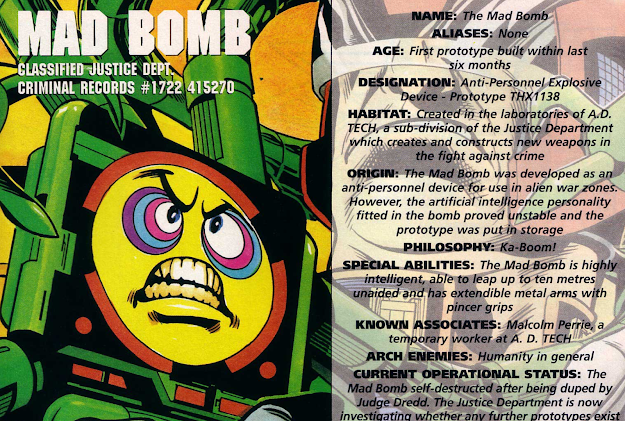 Cybernetic Jungle (Part One)
Oh, that was a sort part one. The first page is a prequel showing a hover pod crashing into the ground leaving only a young boy alive. Jumping forward to the current timeline we discover a new terrorist is threatening MC-1 by attempting to take control of the cybernetic network located underneath MC-1. Of course, Judge Dredd is sent to investigate and discover the truth and is soon in trouble and under attack! Better than the first story but seems lacking in detail. I get the stories are short but this seemed rushed.
Also quite weirdly for the magazine, we are treated to a second Criminal File: 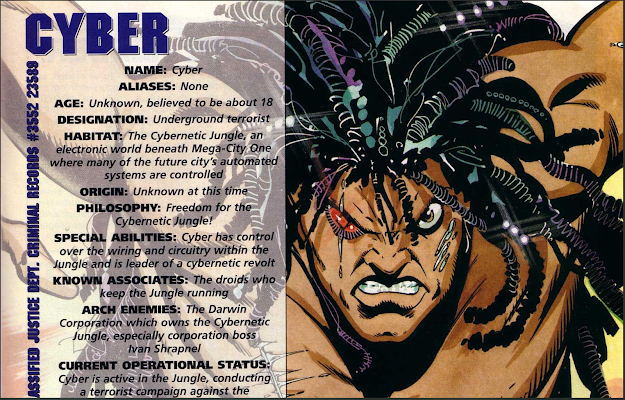 Dragon's Lair (Part Two)
Following on from Judge Dredd's and Judge Hershey's blunder in part one, Judge Dredd gets requested to assist at the local iso-cube. Upon arriving, Judge Dredd discovers it is a trap set by Dragon and awakes in a fighting pit. It is time for Dragon to have his revenge! Whilst this is happening Judge Hershey finishing up the arrests arrives after Judge Dredd to find the guards acting very suspiciously, what are they hiding?
Great Part two to this tale and what is even more exciting is that there is a part three!! Yep, we have to wait until issue 16 to discover who will win between Judge Dredd and Dragon! Once again the artwork truly makes this tale and the villain Dragon is so badass, with his morphing tattoos I know he will lose but I kinda don't want him too 👀 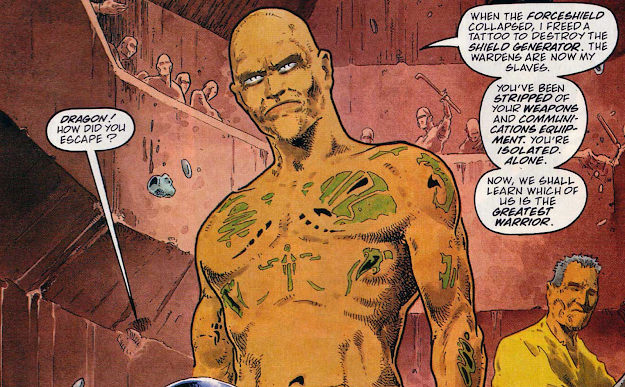 And with that, we have reached the end. A quick painless issue, it was okay two pretty weak tales but Dragon's Lair saves the issue. I just feel that having one strong story is so disappointing considering the potential of the other tales. But I guess the budgets weren't huge for these comics so you get what you get.
I really need to work out how to design a Dragon style character to use in the Judge Dredd miniature game. Feel he would make for a great one of scenario or use him as the main villain in a campaign. Hmm, time to start designing.
Drop me your thoughts below or better yet sign up by dropping your email in the notification section in the headings. Thanks for stopping by.
Labels: Cyber Dragon JDMG Judge Dredd Judge Dredd Lawman of the future Judge Hershey Judges Justice Department