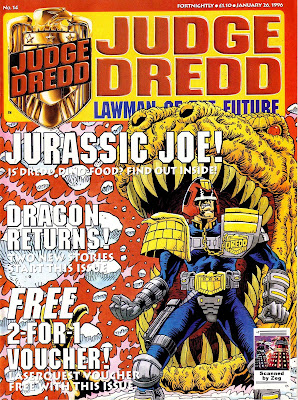 Time waits for no man especially one reading Judge Dredd Lawman of the Future. So here we are on issue 14 and what a cover! Looks like Judge Dredd will be going up against a Dinosaur. So let us waste no more time a dive on it.
Three tales always grace the pages of these issues. Up first is Sponts-a-go-go, then Part 2 of Survival and finishing up with Dragon's Lair the return of the Dragon.
Survival
Whilst towing an ice-berg filled with oil the Judges accidentally release a parasitic virus that can change shape to any of the hosts it has infected. With the crew completely under its control Dredd is forced to confront the virus on the oil-filled iceberg in an attempt to burn the virus away and save MC-1 from a horrible fate. A bit of a too far fetched of a story for me to be honest even for the world of Dredd, it really lost me when it morphed into a Dinosaur.
Character Fact File: Dragon. I will let the image speak for itself but I seriously need to create this character in miniature form. Such a badass. 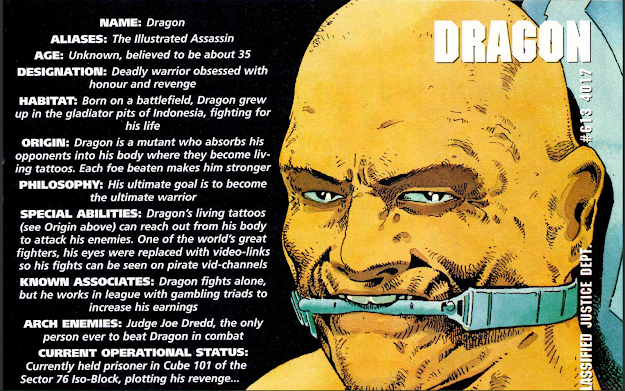 Sponts-a-go-go
Gilbert has invented the Sponts gun, a weapon that when fired causes the victim to start spontaneous admitting their previous crimes. Soon the Judges are overwhelmed with truthful citizens and whilst they are distracted real criminals are looting the sector. It is up to Dredd to find the cause and bring it to an end. Now, this is a comical tale worthy of being a Dredd tale. 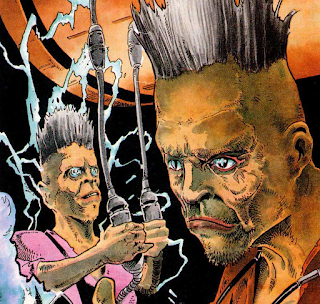 The headline story sees the return of Dragon! Trapped in a shielded vault, Dragon is caged like an animal unable to use his powers without being fried. But he slowly waits his chance to escape and seek out the man who put him there Judge Dredd. Whilst nearby Judge Dredd and Judge Hershey are fighting off a group of Plugheads (Perps who like to get juiced of a live power feed) in the local power plant. During the firefight, the power plant is damaged causing a sector-wide blackout. This was the very opportunity that Dragon needed and soon his tattoo's are active and freeing him from his cage. The Dragon is now officially loose.
Loved this story, great art by Alex Ronald, a great story by Robbie Morrison and the return of a complete badass. This was a solid issue and one of the strongest to date, I hope this solid storytelling continues on.
Drop me a comment or head over to Instagram to follow my adventures there.
Posted by Adventures with Peps at July 14, 2020