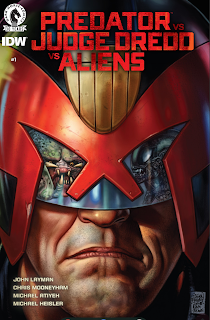 Splice and Dice Issue 1
Commercial Fluff: The ultimate science-fiction crossover pits the legendary lawman Judge Dredd against the universe’s supreme hunters, the Predators, as they both try to survive an onslaught by the galaxy’s ultimate killing machines, the Aliens!
The story kicks off strong with a Predator being the prey to some creepy beastmen in a Cursed Earth Jungle/Forest - The Alabama Morass. After capturing the Predator, the beastmen board the Predator's ship and discover the skull of a Xenomorph! Using the DNA found on the skull a geneticist called Dr. Reinstot manages to grow his own facehuggers in hopes of merging its DNA with that of the now captured Predator.
Elsewhere in the Cursed Earth, a Judge team lead by Dredd is on the trail of one Archbishop Emjoi, a robot prophet who has fled into Alabama Morass. Leading them into Reinstot's territory. The issue ultimately finishes with a team of Predators landing in the Morass in an attempt to rescue their missing brethren.
This whole comic is purely about setting the scene and getting all the playing pieces in the same zone it would seem. Solid enough start but more excited to see where it is going. It is a nice idea to have a geneticist playing with xenomorph DNA and I get the feeling we aren't going to get your standard Aliens in this story. 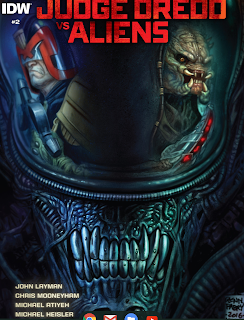 Splice and Dice Issue 2
Commercial Fluff: Want to make apocalypse stew? Throw in four Judges, one insane genetic scientist, a smattering of emoji-based cultists, a dash of Predator, and a pinch of the essence of xenomorph, mix, and retreat to the nearest bunker. In this issue, Dredd follows a criminal cult leader into the Alabama Morass. A crew of Predators arrives on Earth to rescue a kidnapped comrade. And they both unwittingly wander into the territory of a revenge-obsessed, gene-splicing scientist who's just gotten his hands on a xenomorph skull...and the universe's deadliest DNA!
This issue begins with a flashback into Reinstot's past and the reason he had fled into the Cursed Earth. It would seem he is attempting to create a better human one combined with animal or alien DNA. We also follow the predators as they trace the Judge's trail and workout how the Judges ran down the Archbishop Emoji before becoming themselves captured by Reinstot beastmen. Inside Reinstot's lair, we discover that he is just simply mad, pure unadulterated mad. Having filtered Alien DNA and his special formula he injects one of the Judges causing him to rapidly mutate into a human/xenomorph hybrid! It is at this time that the Predator hunting pack arrives and hell breaks loose. 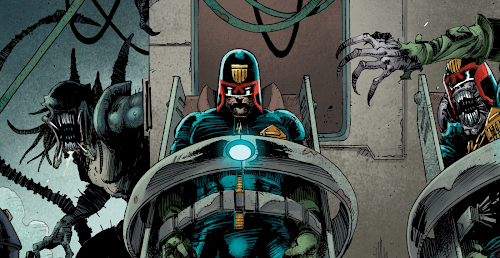 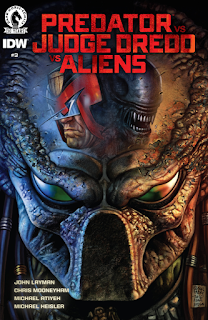 Splice and Dice Issue 3
Commercial fluff: Dr. Reinstadt is hosting a party! AN APOCALYPSE PARTY! He's gotten his hands on some xenomorph DNA: a dream come true for a mad genetic scientist who's already built a clan of animal hybrids. He's also captured a Predator, and even his old acquaintance Judge Dredd has come knocking on his isolated lab's door. Now that his friends are here and ready to go, the only thing left to do is hit the town! They're taking the party to Mega-City One and raising hell!
Now things are heating up! The predators are ripping through the beastmen's camp killing all who stand between them and their captured brethren. Unfortunately for them the captured predator is already dead, killed giving life to a Predator/xenomorph that is now in the process of attempting to kill Judge Dredd! With the aid of PSI Judge Anderson, Judge Dredd manages to escape but comes face to face with the predator hunt team who have managed to take Dr. Reinstot and some of his mutants capture. During a quick punch up Anderson manages to communicate with the Preds and together they attempt to hunt down the two xenomorph lifeforms in the jungle. Following some great action, the rogue Xenos are killed along with one of the Predators, but during this time Archbishop Emjoi has returned and aided Dr. Reinstot freeing him and helping him to flee to MC-1. 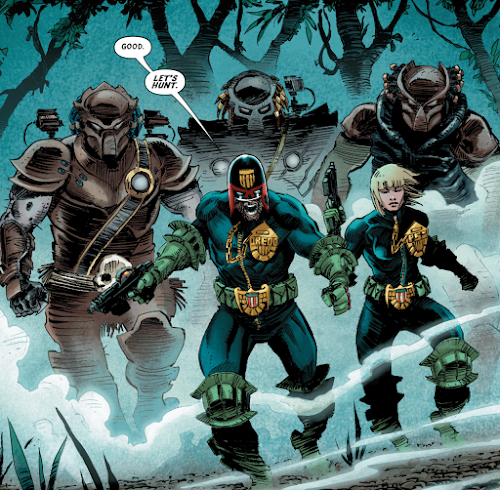 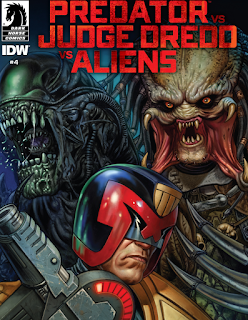 Splice and Dice Issue 4
Commercial Fluff: Road trip! The mad, gene-splicing scientist Dr. Reinstöt is having the best summer ever as he hits the road toward Mega-City One. He’s got a sweet ride: a stolen Predator ship! He’s got his new BFF, the murderous Archbishop Emoji, riding shotgun. And he’s got snacks . . . or maybe he is a snack . . . for his homegrown crew of xenomorphs. Spoilsport Judge Dredd and his killjoy Predator friends are hot on their tail, trying to ruin everyone’s fun, but Dr. Reinstöt has a secret weapon that will keep the party going. Until the end of time! Which might be tomorrow, if Reinstöt has his way. Either way, it’s going to be a killer time.
Like that we are on the last issue! Dr. Reinstot has injected his beastmen with the xenomorph DNA, creating some crazy aliens - Elephant, Rhino, Stag and a bear. Landing inside MC-1 it doesn't take long for the xenomorphs to start snacking on the citizens. Having now served his purpose Dr. Reinstot shoots the Archbishop Emjoi through the head before feeding his human followers to the aggressive xenomorphs. By the time the Predator hunt team and the Judges arrive the block has become a creepy warren-like nest for the xenomorphs. Turns out Dr. Reinstot had one more syringe of Xeno DNA and injected himself with a Queen Strain. The alien DNA mixes with his crude spider genes and creates a terrifying Xeno/spider Queen! Of course, as soon as Dredd and the Preds arrive the Xenos days are numbered and soon they are killed off one by one until only Queen Reinstot is left.
That is where I will leave it. I have given away a lot of spoilers but want to let you enjoy the final for yourselves. 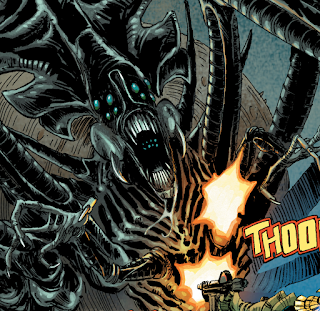 Is this a classic story? Nope. Will I go back and re-read it in a year or so? Maybe. What I can tell you is it was an enjoyable romp through some comic IP's I really enjoy and the Reinstot Spider Queen will give me nightmares for years to come. Have you read this comic? What are your thoughts? Drop me a comment and take a moment to sign up for notifications of new posts. You can also follow me on Facebook and Instagram.
Until next time here is a final favourite image of mine from the comic. 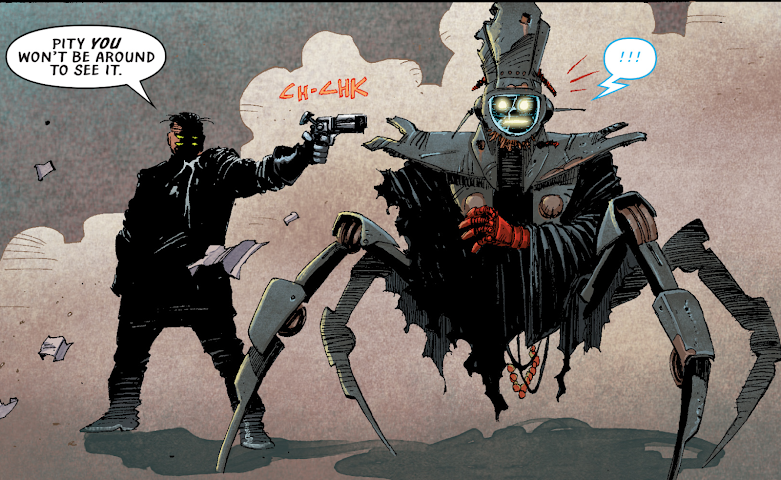