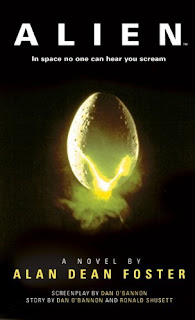 Finally got around to reading Alien by Alan Dean Foster. I have enjoyed this film so many times I couldn't actually believe that I had not read the novelization version. It is worth noting the film came before the book, not the other way around. Here are the stats.
Book Details
Title: Alien
Author: Alan Dean Foster
Publisher: Orbit (1992)
Type: Mass Paperback
Page Count: 253
Commercial Fluff: Based on the screenplay by Dan O'Bannon. The crew of the spaceship Nostromo wake from cryogenic sleep to distress signals from an unknown planet. One is attacked when they investigate a derelict alien craft. Safely on their way back to Sol, none foresee the real horror about to begin.
Review 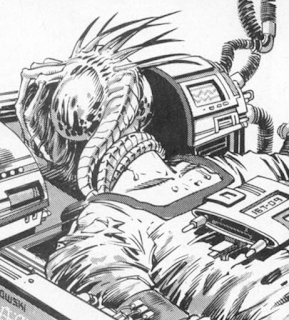 As mentioned this book was written due to the film being a massive success. First came the screenplay, then the movie and then the book. It's weird to think it didn't happen the other way around, which is the more traditional format. Got to be honest and say if you do not know the subject please go watch the film, be scared and have fun, it is one of the best movies I have ever watched.
Highlights of the book for me was getting more depth added to certain scenes and characters. The book did a great job of making Ash a more thought out persona, Parker and Brent also became more interesting as characters that you started to care for. Dallas is as great as he is in the movie, whilst Ripley seemingly started to disappear into the background and doesn't seem like the heroine of the story - not sure why the writer downplayed her in the novel form. The novel also did a great job of describing the derelict alien craft and how the team went about exploring it. Giving us something to imagine the scale and depth by which was missing in the movie, I was genuinely creeped out by the scene knowing what was going to happen but completely unable to stop it.
One section I personally found enjoyable was the lack of description of the alien. I know it's a weird thing to say but the way the author went about it was dread inspiring. It almost read Lovecraftian, leaving it up to your imagination to fill in the blanks as it seeps out of the shadows like a Boogey monster from your childhood.
Overall a great easy read and if you find it at a second-hand thrift store treat yourself, enjoy a relaxing afternoon read and then re-watch the film in the evening.
Let me what your thoughts are on this title or just tell me how much you love the alien movie! Remember you can also follow my adventures on Instagram.
Posted by Adventures with Peps at July 10, 2020