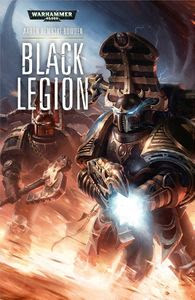 A few months ago I read The Talon of Horus and was definitely impressed by the birth story of the Black Legion. What this meant is that I had high hopes for the second book in the series and was excited to see how the story will progress. A big highlight of the first book is that it is told by a Thousand Sons Sorcerer called Khayon and I hope the story continues on this path. So without further ado let us dive in.
Book Details
Title: Black Legion (Black Legion #2)
Author: Aaron Dembski-Bowden
Publisher: Black Library
Type: E-book
Page Count: 288
Commercial Fluff: Ezekyle Abaddon and his warlords strive to bind the newborn Black Legion together under threat of destruction. Now Khayon, as Abaddon's most-trusted assassin, is tasked with ending the threat of Thagus Daravek, the self-proclaimed Lord of Hosts - a rival to the Ezekyle's final fate.
Fighting the vile whispers of the Dark Gods within his mind, Abaddon turns a fevered gaze back to the Imperium, where his destiny awaits. Yet the Emperor's Champion and his Black Templars stand guard at the gates of Hell, and Sigismund has waited centuries to face Abaddon in battle
Review
As mentioned in the opening paragraph this is the follow up to The Talon Horus, and it has a big task ahead of it to best the first book, but somehow it does. The book is packed with full-on action and for any fan of fluff and background then this is a book for you, especially if you are a Black Legion collector. It once again follows Khayon's story who has now become Abaddon's Assassin and is being tasked with the downfall of Daravek Lord of Hosts. We get to journey along with his trials as Khayon attempts to complete his mission but it would seem Daravek is blessed by the Dark Gods and is, in fact, playing his own games as well. I don't want to give anything away but when the twist comes I did not expect it at all it was a great part of the book when it happens. 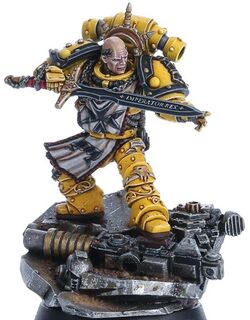 Another highlight was when the Black Legion burst into realspace for the first time only to be greeted by the newly formed Black Templars led by Sigismund. This fleet has been stationed here for centuries awaiting the return of the traitorous forces. We get a great ship battle and the ultimate showdown of Abaddon vs. Sigismund on the Eternal Crusader and this was a great moment for the lore buff inside me.
Ultimately I have to say this is a great improvement on book one. Characters are naturally progressing and flawed, the battle scenes are brutal but not bolter porn and travelling around the Eye of Terror has never been so much fun. My final question is; when is book three?
As always say hi in the comments section and let me know your thoughts on this book.
Posted by Adventures with Peps at July 31, 2020