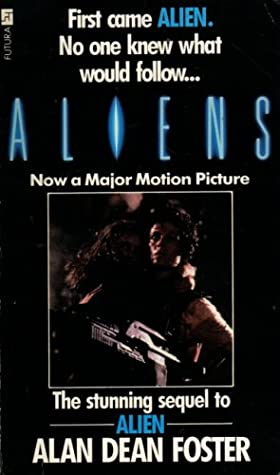 Looks like I have been sucked back into the world of the Xenomorphs and Ripley. I find it nice to jump between the realms of 40k, Judge Dredd and Aliens. Three styles of the future, three completely different views. I find Aliens to be a universe of danger and fear of the dark, mankind is not alone in the dark corners of space, but it is not the aliens you should fear - corporations and humans are the true dangers...
With that thought now in our minds we head into my next read Aliens.
Book Details
Title: Aliens
Author: Alan Dean Foster
Publisher: Warner Books
Type: Mass Paperback
Page Count: 247
Commercial Fluff: Having survived one encounter with an alien, Ripley is persuaded to return to the planet where her crew found the alien ship. A colony has been established there, but suddenly all contact with the settlers has been lost. Accompanied by marines, Ripley is going to find out why.
Review
Just like Alien, this is a novelization of a movie most people have seen. I couldn't help but imagine the actors as I read the story attempting to recreate the film in my mind.
This is a great representation of a well-written movie novel, the descriptive texts transported me straight back to the film and I was watching it all over again. It does have one flaw, in my opinion, the final standoff with the Queen seemed to lack the tense nature of the film and seemed rushed (maybe the author was running out on the page count).
Ultimately no surprises to this book, this is a great fan read but watch the movie first, you really won't regret it. Alan Dean Foster has a great way of sucking me into the tale and making me a part of the experience once more and I find that is the best compliment I can give the author. And I give it freely.
Have you read this novel? What're your thoughts, let me know in the comments below or on Instagram and once again thank you for joining me!
Posted by Adventures with Peps at July 24, 2020