Welcome readers to another book review. Not sure why it took me this long but I am dipping my toes back into the Bantam Aliens series. The last one I read was the Female Wars title way back in December 2019, well I managed to track down a copy of Genocide and was hooked by the cover art so as soon as I was done with Alien I knew I had to start it. Which means this book jumped ahead of a few other titles I was meant to be reading 😲 But after this there will be a break whilst I track down a copy of Aliens: Alien Harvest - I know I could easily get a collected volume from somewhere like Indigo but I really want them as single titles to make the set fell complete. Hopefully, I can discover one on eBay for cheap.
Book Details 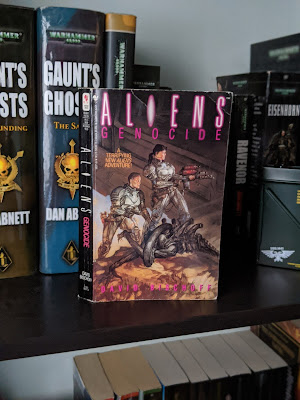 Title: Aliens: Genocide
Author: David Bischoff
Publisher: Bantam Books
Type: Mass Paperback
Page Count: 288
Commercial Fluff: Their queen is dead and the hive mind has been left to flounder on its own. On a world bereft of its only guiding force a schism is taking place: two strains of alien, formerly united by one all-powerful mother, now divide their forces for a world-shattering, acid-drenched war. On Earth, after a generation of rebuilding in the wake of an alien infestation, athletes from every corner of the world are flocking to humanity's Goodwill Games. But some come with a dangerous new tool: a drug called Fire, distilled from the very essence of the aliens' body chemistry. The military wants it, Pharmaceutical kingpin Daniel Grant wants it. And the only place the essential ingredient can be found is on a world convulsed by the alien holocaust.
Review
Well, well the story has progressed, set almost 21 years after Female War we experience a world almost purged of Xenomorph and the beginning of the rebuilding. The Pharmaceutical empires seem to hold sway over the rebuild and a lot of people are using a new drug called Fire. This drug which enhances the average human is actually made using the royal jelly from the xenomorphs. With "natural" supplies on Earth drying up Pharmaceutical leader Daniel Grant pays/bribes/persuades the Government to authorize a return visit to the Alien homeworld, what possibly could go wrong?
A lot it turns out, they arrive on the Hive world to discover that without the main Queen (Killed in Female Wars) the alien species has developed into two versions - the original black type and a new red type. Having now landed in the middle of this species war the Marines do what they do best kill sh*t. Now all they have do is fight their way into the black hive, find the Queen, grab some royal jelly and get out in one piece, sounds simple enough. It is here that I will leave the main story arc and let you discover it for yourself.
One highlight I experienced from the book was the saxophone wielding Marine. I love the idea of these battle harden soldiers having quirks or enjoying music between missions but why on earth did he bring it planetside? Then to make things worst he actually uses it to beat an Alien, you don't see crazy stuff like that in 40K. 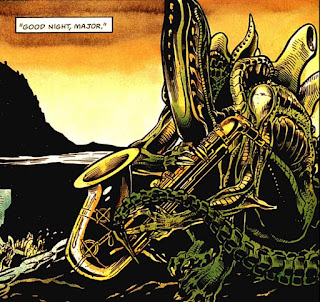 Overall an average read that I enjoyed, mostly due to the setting more than the actual writing. I felt the story had a lot of room to be great but was completely missed. Have you read it? Drop me a comment and let me. As always I appreciate you stopping by and reading my blog thank you.
Posted by Adventures with Peps at July 17, 2020