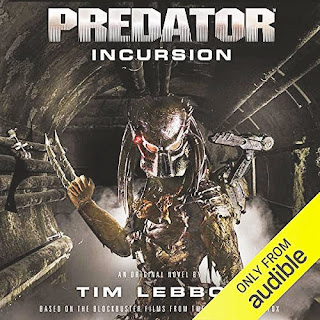 It's been a while since I have done an audio review and it only felt right for it to be apart of the Alienverse. Here come the Rage Wars an Audible book exclusive, involving all the major players - Xenomorph, Predators and Colonial Marines. But it doesn't stop there we also get the Rage but more on that soon.
Details
Title: Predator: Incursion: The Rage War, Book 1
Written by: Tim Lebbon
Narrated by: John Chancer
Run time: 11 hours 31 minutes
Commercial Description: Predator ships stream into human space in unprecedented numbers. The Colonial Marines, controlled by Weyland-Yutani, respond to the incursion, thus entering the Rage War.
This terrifying assault by the Yautja cannot go unchallenged, yet the cost of combat is high. Predators are master combatants, and each encounter yields a high body count. Then when Lt. Johnny Mains and his marines—the VoidLarks—enter the fray, they discover an enemy deadlier than any could imagine.
Book one in an epic trilogy that continues in ALIEN: INVASION and concludes in ALIENS VS. PREDATOR: ARMAGEDDON. The universe will forever be changed.
Review
Went into this book blind, not even sure what I was to expect, but I trusted Tim Lebbon's writing having experienced a few books by him already (Out of the Shadows springing to mind). The cover hints at a Predator heavy tale as the description, this is an area I have yet to explore but it is definitely on my to-do list.
Straight away I am surprised by how far into the future of the setting we are flung. I feel this was done to avoid any canon contradictions as everything is now folklore, legend or well-known facts. This also allows Lebbon to give the colonial marines some real upgrades as far as technology goes, allowing them to stand toe to toe with Predators and Xenomorphs and actually kill the odd one before getting their arses handed to them.
The story suffers like many opening novels as it tries to get as much detail as possible to make books two and three flow better. The characters are very archetypical for their roles and are easily forgettable, sometimes blending into each others characters as the story continues. What this book does do well, is the action scenes, these are tense, bloody and exciting just what you want in this type of book. The Predators though not hugely active in the book come across as aloof, mysterious and almost fearful of what they have experienced in the outer rim which is great as I don't want their point of view, I want them fighting and killing. The Rage aka the Founders aka the villains is a creepy splinter group of humans, who travelled into the darkness of space and discovered a world of high technology that housed the Faze (what on earth are the Faze? Are they worm-like creatures?) but they also found more Xenomorphs. In the time that follows the Faze and the Founders start combining technology building a force of androids that can control the Xenomorphs and raise an army to conquer the rim worlds. The Founders are now completely changed they have technology that keeps them alive in tanks of liquid that move around on spider-like robotic legs and how devolved have the non-founder humans become (limited gene pool)?
Overall a great start to the series and it has got me wanting to listen to the rest. Have you listened to/read this story? Let me know in the comments.