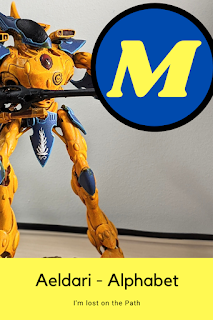 My Eldar Encyclopedia is becoming a bit bloated and over complicated so I am attempting to fix this. Starting with the A-Z of Aeldari words I have over there. Whenever I have the urge I will post a section of that page, create a link to this page and see if it tidies up the page and makes me feel happy once more.
M
"There is no corner of the galaxy that has not felt the eagle-keen gaze of Alaitoc." - Elarique Swiftblade, Autarch of Alaitoc
Maelithii: Banshee Spirits
MairNovis: Jetbikes
MairNovis: Speedy
Man/Marg/Mor/Mure: Death
Marathag: Literally means 'face of death,' and is the name given the Harlequin rictus mask.
Margorach: The Eldar word for 'death hands,' but also means Death Jester.
Marsgrech: 'Screaming Death' or the common name for this Eldar word is bio-explosive shuriken.
Maugetar: The weapon wielded by Maugan Ra, which takes the form of a shuriken cannon with the attached executioner, and the literal meaning for the Eldar word is 'Harvester.'
Mean: Striking
MeanTokath: Striking Scorpions
Mear: Swift
Mear-feothan: Scout Walker
Mear-Feothan: Storm/Typhoon
MearNovas: Swooping Hawks
Men: Hand
Menlia: Finger
Menliadeng: Fingernail
Menshad Korum: Exarch, but has the exact meaning of 'hunter in pursuit of himself,' and reflects upon their goal for personal perfection.
Meokan: Striking, with purpose
Metos: Being an objective
Mile'ionahd: Warrior of Wonder/Warrior of Surprise
Min: The weak link in the chain that bound Vaul to his anvil
Minnan: Clean
Mirianathir: Mother of the Desert wind
Mironin: Preserved
Mirrotuis: Maintained
Mon-Keigh: Relates to any non-Eldar species that they see as needing elimination, such as humans, but humans are the common translation for this Eldar term.
Morenn: Destruction
Muan: Foot
Muanlia: Toe
Muraddin: Sand
Murehk/Murekh: Literally means the 'sting of the wasp,' but is the name given to the Eldar shuriken pistol.
Murekhalir: The Eldar word for 'Deathbringer, also another term for Slaanesh
Original Materials
This is a project that has been worked on for a while and mainly for my own needs so I never thought of recording page numbers etc. as I never thought it would leave my notebook but for those interested, it has been collected from the following locations:
Rogue Trader (1987), Warhammer 2nd/3rd/4th/5th Editions, Eldar codex (2nd ed/3rd ed/4th ed), Codex Dark Eldar, Citadel Journal #17, White Dwarf #127 (original Eldar army list), Codex: Titanicus, Codex Necrons, Warhammer 40,000 compendium, Warhammer 40k Wargear (2nd ed). Battletome Sylvaneth. Battletome Daughters of Khaine. Battletome Idoneth Deepkin.
Black Library Novels: Shadow Point, Harlequin, Chaos Child, Farseer, Tales from the Dark Millennium, Warrior Coven, Path of the Warrior, Path of the Seer, Eldar Prophecy, Valedor, Asurmen, Jain Zar, Rise of Ynnead: Ghost Warrior, Rise of Ynnead: Wildrider.
**Also there is this web version of an Eldar dictionary that turns out has been around since 1990. It's more complete than what I have collected and better organized. This link was requested to be added by David Grophland: Eldar Language
Posted by Adventures with Peps at July 23, 2020