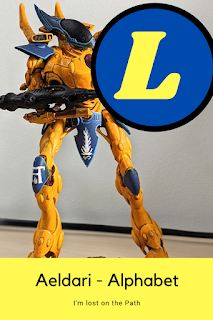 My Eldar Encyclopedia is becoming a bit bloated and over complicated so I am attempting to fix this. Starting with the A-Z of Aeldari words I have over there. Whenever I have the urge I will post a section of that page, create a link to this page and see if it tidies up the page and makes me feel happy once more.
L
"No barrier, no enemy will thwart my purpose. This night I bring him the dream of death!" - Lord-Phoenix Dreamspinner, Ghost-Warrior Iyanden Craftworld
Lam/Leram/Liam: Language/Speech
Lamarti: Term given to the 1st day of the week. Note there are only 6 days in the Eldar week.
Lambruith: The complex system of hand signals used by the Harlequin Mimes.
LamEldannar: Eldar language
Lan: Bright
Lann: Illuminated
Lannanaris: Dawnlight Raiders - Corsair band.
Lantillifieth: Bright slayer of darkness​​
Larrasurath: Dreadnought and is also translated as Questing Warrior.
Las: Glowing
Lavair: Welcomer.
Leanir: Shoulder
Leathanam: Menial Labours
lia-: Again/Recurrence
Lir: Heart
Liran: Home
Liras: Town
Lirun: Settlement
Losse: Iron
Losseainn: Space Marine
Original Materials
This is a project that has been worked on for a while and mainly for my own needs so I never thought of recording page numbers etc. as I never thought it would leave my notebook but for those interested, it has been collected from the following locations:
Rogue Trader (1987), Warhammer 2nd/3rd/4th/5th Editions, Eldar codex (2nd ed/3rd ed/4th ed), Codex Dark Eldar, Citadel Journal #17, White Dwarf #127 (original Eldar army list), Codex: Titanicus, Codex Necrons, Warhammer 40,000 compendium, Warhammer 40k Wargear (2nd ed). Battletome Sylvaneth. Battletome Daughters of Khaine. Battletome Idoneth Deepkin.
Black Library Novels: Shadow Point, Harlequin, Chaos Child, Farseer, Tales from the Dark Millennium, Warrior Coven, Path of the Warrior, Path of the Seer, Eldar Prophecy, Valedor, Asurmen, Jain Zar, Rise of Ynnead: Ghost Warrior, Rise of Ynnead: Wildrider.
**Also there is this web version of an Eldar dictionary that turns out has been around since 1990. It's more complete than what I have collected and better organized. This link was requested to be added by David Grophland: Eldar Language
Posted by Adventures with Peps at July 19, 2020